Canadiens give Bruins an awakening in Game One loss

Share All sharing options for: Canadiens give Bruins an awakening in Game One loss 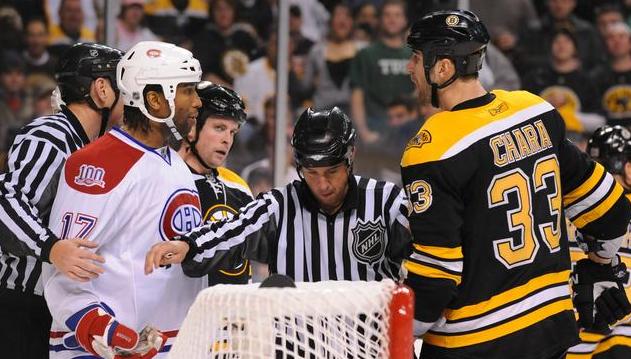 Call this a post written with my coach's hat on...

I'll get to the fan in me later.

The Canadiens may have lost the first round of the battle, but have served notice to the Bruins that it will be a long war.

And a nervous looking Bruins team looked like they knew it, as for in the span of two games within a week, the Canadiens have shown they are gaining ground on them.

You truly get the feeling Boston didn't want to play Montreal at all this time around. There was enough tentative play on their part for long strrtches that bodes well for the Canadiens making this one long series.

The turning point of the game came in the third period. With the score tied at two, Josh Gorges was called for a crosscheck on a Bruins forward in front of the net, and Zdeno Chara took advantage to put the Bruins ahead for good.

With less than nine minutes remaining, the Canadiens had few chances to get even, as the momentum swung Boston's way, and they shut down the Habs to steal the game.

But you know what? I haven't been this happy about a loss all season!

Because the Canadiens didn't just show they could play with the Bruins, they demonstrated that the series isn't the mismatch some make it out to be. From the middle of the second period, to the middle of the third, the Canadiens took hold of the game for close to 20 minutes. That wasn't supposed to happen on Boston's rink, but it did. You could hear the locals grumbling.

These teams were even on this night, and the one that got the breaks won the game.

I'll get to those breaks in a bit. 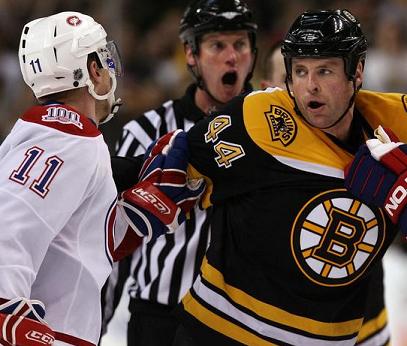 The Bruins will be happy they won, but the more appropriate word is "relieved", because they did not seem to earn much of what they achieved.

Having coached, it's not hard for me to put myself in Claude Julien's shoes, and not be happy with the Bruins effort. The Bruins were way off their game plan. With a 2-0 lead nearing the end of the first period, they allowed the Canadiens back in the game, and didn't control the game until they led 3-2.

Without Andrei Markov in the lineup, Boston should have been able to take away the Canadiens transition game, but only succeeded in part. They spent too much energy chasing down checks and wasting precious steps while opening the neutral zone for the Canadiens to slip through.

Of course, that is the essense of Bruins hockey, not that it ever worked in the grand scheme.

The Canadiens defensemen absorbed the hits, for the most part, to make the plays that were simple and offered up by the openings created. By willfully taking the beating, the Habs D profited from the slow footed Bruins recovery, and didn't have much trouble gaining the Boston zone until the end of the game. 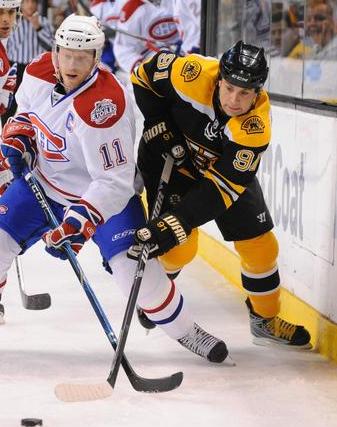 The difference in this game came via three costly errors made by Montreal.

On the first goal, Price failed to sufficiently freeze the puck with any protection but his glove. It's never a good sign when the play is at the net and the defensemen's numbers are easily read as their backs are to the play. Numbers 8 and 24 in this case, should not be looking inward at their goalie, but outward at forwards charging the net. Had either of Komisarek or Schneider been facing the play, they would have caught Phil Kessel sneaking in to pop the loose puck behing Price.

It's a simple confidence mistake. Let the goalie do his job. The defensemen's work involves being faced outward for obvious reasons.

The second goal, only minutes later, was an unforced communication boob between Price and Gorges on a dump in. It was hard to scan the whole play from the camera angles provided, but you could tell by the second's hesitance that a breakdown occurred. Price's work as goalie involves more than simply stopping pucks. When stepping from his net to retrieve dumps, he must also quickly scan up ice for his defensemen's pass options before judging what move is safest and for where to place the puck. The speed of the chasing forwards is where Price's focus should be.

On the eventual game winner, the penalty that set it up - Gorges crosscheck - was a play typically overlooked all game long by officials. On the PP itself, the Bruins were primed for the chance, and in fact looked to have scored just seconds before, when Price smothered a rebound of the crossbar.

But it's the penalty call I have a big problem with.

There is no disputing that Gorges cross checked a Bruins forward on the play. My problem with it, is why did the exact same action go uncalled a good dozen times throughout the game for either side. I'd dearly like to know what made that one so particular that it had to be the one singled out?

I must have seen Saku Koivu take at least three similar shots in the numbers himself, and surely other Bruins felt lumber across their numbers in this game. Why that one, with half the third period gone?

Is consistency and fairness too damn much to ask for?

I'll give credit to the officials though, that lame call for hooking on Tomas Plekanec in the first period was just as lame as the one handed to Patrice Bergeron early in the second. Both were brutal, and both tended to help shift the game's momentum the other way.

And that's exactly what we all wish officials wouldn't do.

By that is exactly what they ended up doing!

How hard can it be, I ask, for an official to look at the entirety of an incident, and distinguish what arns, legs, elbows, shoulders, sticks, and motion are doing and causing all at once?

What are Hamrlik's choices on the play, as he races Lucic for the puck?

Does he keep his stick on the ice, extended, hoping to poke the puck first?

Or does Hamrlik pull his stick up, into the air, and risk a high sticking penalty upon impact?

Logically, you go with the first, and hope that the official sees no trigger motion pulling, no leg hooked back, in the case of the opponant player tripping on the stick.

In this case, the official noticed nothing but Lucic's impact into the boards, and raised his arm. 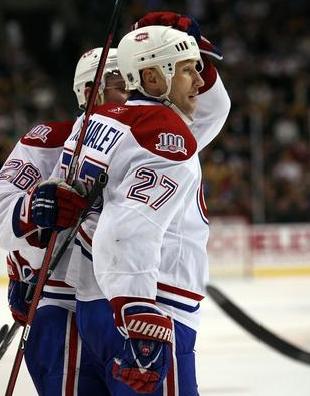 Seconds after Hamrlik's penalty expired, the Bruins were up 1-0.

It was the same deal for the Plekanec elbowing call in the second period, in which the Canadiens forward's elbow nudged the Bruins player's helmet after a missed hit. Plekanec lined up his guy and missed, and in rolling off the glass, had his forearm bounce and hit the Bruin in the head. A penalty in my books, is a direct hit and nothing else.

No goals resulted from this, but Plekanec, already playing as if wondering what he could and couldn't do, was rendered practically ineffective - not that he was having a stellar game to begin win.

Those were the breaks handed to the Bruins, both by the Canadiens, and the officials. Not the difference maker in the end, but enough to tilt the play at appropriate times to enable the Bruins win.

You could look at the sum of this, in two ways: The Bruins didn't fully earn the win on their effort or Montreal's few costly mistakes were jumped on by the Bruins.

Both angles result in a 1-0 series lead for Boston.

The good news is that from this, there is much to build on from the Canadiens point of view. As good as they did a bunch of things right in Game 1, there's room for some improvement that could make a difference as the series goes along.

I've placed myself in Julien's shoes, now it's time to put on Gainey's boots!

If I'm the Montreal bench boss, I'm happy with 80% of the lineup. Things that need work include:

Brisebois learning the virtue of open ice spaces. Someone needs to drill it into his thick skull that pucks aren't to be fired through oncoming shinpads for the millionth time. I'd put it to him this way: do it, and you've played your last game, comprendez?

Inform Tom Kostopoulos, that there is a foot wide red line at center ice that he must cross to avoid icing. Work on finding it.

Get Carey together with the defensemen to learn shout commands in regards to dump ins. This season has produced every possible bungle of communication in that area and should have been addressed and resolved long ago. Until Price has some command of the situation, perhaps the backchecking forwards could be a little more alert!

Find a way to remove worry from Plekanec's brain. The Habs center's instinct valves are cluttered with fear and filled with hesitance and reaction. If he is so messed that he is unable to generate offensively, task him with a fourth line role and minutes, asking him to never compromise his mid ice position. Give his wingers to Glen Metropolit, who looks like he could make better use of them.

Show pictures of Russian tanks to Andrei Kostitsyn and say, "This is you! Now hit everything in your path to the puck! That is why you have size!"

Removing my coach's hat now, and donning one of a fan, I was completely disgusted with how the Bruins ended the game.

Call it classless in the great Bruins tradition.

After Kessel put the game away with an empty netter, the gutless puke of a floater taunted Maxim Lapierre, who was skating by, with what was an obvious invitational verbal shot and a defending stick raised to Lapierre's face.

Most players, after scoring their easiest goal ever, rarely gloat, and simply skate back to their team mates in celebration. Kessel, upon gesturing at Lapierre had it coming. He was in the midst of nothing more than a gentle facewash of Kessel's rat faced mug, when Milan Lucic - ever the yellow coward - hit Lapierre with an unsuspecting flying elbow to the head.

Did I call the Bruins classless? The own the word!

The Bruins simply cannot fend for themselves. They always require backup.

That's why during the course of this game, they didn't get stupid as they usually do, when it was on the line.

They waited till it was over, like the gutless pukes they are.

Yes, they'll rant that it was instigated by Montreal, yet the Habs never require a third man in to help someone fight their battles.

And did you laugh when Marc Savard, in the aftermath, looked around and picked Koivu as his dance partner. Typical!

Lucic's actions might be up for suspension by the NHL. If Daniel Carcillo's butt end in Game 1 of the Flyers / Penguins series is worth a game, Lucic's deed should come under the same scrutiny.

I hope he isn't suspended.

Lucic is stupid, over rated, irrational, and a liability. Keep him in there.

He's bound to mess up at the best possible time for Montreal.