20 Quotes And An Anecdote To Get Ready For The Bruins

Share All sharing options for: 20 Quotes And An Anecdote To Get Ready For The Bruins 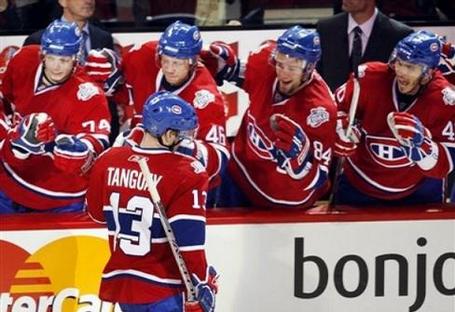 It looks as though the Canadiens and Bruins are ready to rumble tonight. Don't expect the two teams spend more than the puck drop to feel each other out.

As things are about to get going, I thought I'd scoop up 20 or so players quotes regarding the series and how they are looking at things. The quote sources are the Gazette, Le Journal, La Presse, RDS, and Rue Frontenac.

After three days of methodical study of the opponant, practice and refocusing, the player's persepctives seem totally fresh, somewhat removed from the weight of expectations from a disappoint regular season. The players know the real season - the only one that matters - is all that counts in Montreal.

As an aside, I've added a little, hellishly funny anecdote from my morning coffee, that was just too nuts not too share. You'll see it below the quotes.

"They will be extremely important, but they’re not flying alone. They need the other players to provide them with deflections and opportunities to not be the only place where we go when we need help."

- Coach Bob Gainey, on the importance of the team's top line not being left with the burden of respnsabilities and expectations.

"I've learned not to put so much pressure on myself and to not make such a big deal deal about what people are saying about games, good or bad. I have to remain concentrated on my play."

- Carey Price, on focussing for the playoffs. 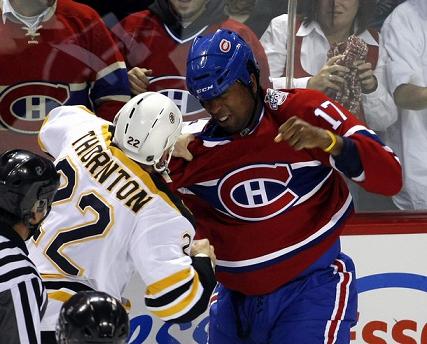 "I heard from a few of his team mates that Thornton was shaking in his boots before the game he was so scared to go against me. He knows it. He's too small for me."

- Georges Laraque on Thornton's unwillingness to fight him at certain points

"If you’re asking if this will have an effect on my future, it won’t. Right now, the focus of every player is about what happens in this series. I hope nobody’s thinking about what’s going to happen next year. We need every bit of energy in the series with Boston."

"Players are rested, ready mentally for the start of the playoffs. The four days off from games has been good for us. It gave us the chance to rest, take a breather and practice."

- Gainey on the benefits on a four day layoff.

"Our biggest asset is our speed. In the playoffs, to have success, you have to make use of your strong points, so we have to use that speed. The more we are skating and in constant movement, the harder it will be for them to execute the system they practice so well in the neutral zone."

- Alex Tanguay, on how to beat the Bruins.

- "If he wants to come see me, especially at the Garden, I'll be real happy, because I'll shut up Bruins fans."

- Laraque, on Thornton again (word to Georges - the Garden's been torn down ages ago!)

"The Bruins are as quick as we are, but the are bigger physically. If we're skating hard, we'll put them in positions where they will be forced to take penalties."

"Our team isn't 100% healthy, but we're a competitive team. My job is in getting players to play to their full potential"

- Gainey, on on focus and objective. 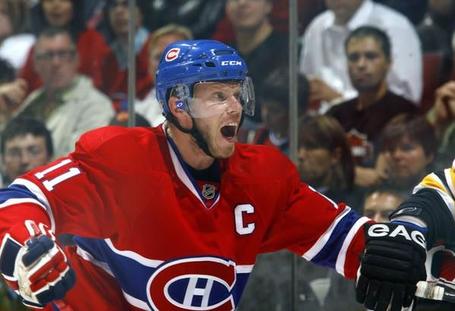 "I'll make use of the playoffs to put this season behind me. It's a new start for me. Once we beat the Bruins, that will make up for it. But it takes the whole team, not just one. The success of a team never rests on the shoulders of one player."

- Tomas Plekanec, on buying back a disappoint year with a strong playoff.

"We're not thinking of the regular season anymore. We're confident, ready for a new challenge. No one starts out champions, and we are all even at this point. It will be a typical series: long, rough, difficult, with lots of tight games."

- Maxim Lapierre, on underdogs and expectations.

"We have a lot of respect for the Bruins and the season they had. It will be a challenge, but one we must attack onegame at a time. If we win one game, it's just one game."

- Gainey, on the big picture.

"There's no replacing Markov, he's a star, one of the best in the league. I'll be doing everything I can to bring my game up a few notches."

- Josh Gorges, on the additional icetime he can expect in Markov's absence.

"I don't know if we have to make up for the season. Our goal was to be in the playoffs."

- Chris Higgins, on outside expectations.

"If the Bruins plan on playing like they did last Thursday, they will have players suspended", opined Laraque. "I've never seen a team so badly manhandled like we were that night. The Bruins will never act that way in the playoffs. They were trying to get us out of the game because they wanted to play the Florida Panthers." 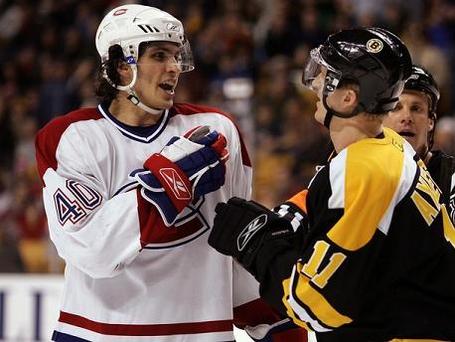 "No one believes the Bruins or Red Wings are going to lose. Us, we want to install some doubt in the Bruins minds. By winning a game or two in Boston, that's what we'll accomplish."

- Koivu, on the underdog role.

"Last seasons playoffs taught me to take things one game at a time. Once a game's over, you must put it behind and concentrate on the next one. That's what I've learned."

"Before the playoffs last season, I'd rarely encountered adversity. I know that this time, I'm much more experienced."

- Price, on the mental aspect of playoff ups and downs.

"I've never started a series thinking we were beaten in advance. We all know what can happen, In 1993, we weren't supposed to win."

- Patrice Brisebois, on defying the odds.

"We can transform this season into an excellent one. If we can put all the elements in place, people will forget the regular season."

I was sitting at the bar, talking over my morning java with a pair fellow hockey poolers about last night's game, when the subject of how many shots were fired by the Capitals Alex Ovechkin in the Rangers. Someone said ten on net, four blocked and four misses.

It made me recall an old story on Rocket Richard, whereupon he encountered a young Rangers star named Rod Gilbert. The future Hall Of Famer asked the legend what his secret to goal scoring was. Rocket told him to meet him on the ice early next morning.

When Gilbert showed, there was the Rocket, with just skates, a stick and a bucket of fifty or so pucks. He told Gilbert to pay close attention, and then hit the ice, spreading the pucks in all corners inside the blueline. In a dazzling display, the Rocket then went about firing every single puck from every possible angle into the open goal. Gilbert was lost for words.

The Rocket skated past Gilbert, off the ice, simply saying, "Know where the net is!"

Moments after telling this story, we were talking about the hockey pool, when an older gentleman sitting next to me having a ginger ale was removing a plastic straw from it's paper wrap. He struggled a bit with it, due to some arthritis, and bent it in a way that when he let go, it flew through the air, spiralling three feet above our heads, to land in another gentleman's coffee cup, seated below us at a table.

A young boy of maybe 12, seated at that table with his Dad, was obviously quick witted, and listening in to our chat. Without missing a beat, he looks up to the oldtimer sitting next to me and says, "You must have taken lessons from Rocket Richard too!"

Coffee through the nostrils is a great way to stain a Habs centennial T - shirt!

Thanks kid! I forget that one for a long time!