Share All sharing options for: Beating The Bruins In Five Simple Steps 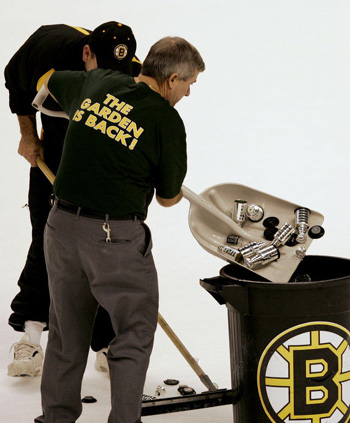 There'll be no farting around in Beantown, the Habs absolutely need to steal a win in Boston to start the series, if they have any hopes of winning the round.

Here's some keys to undoing the Bruins, like they haven't written the book on it already.

1- For starters, get under Chara's skin and chin at every opportunity. Chara's a smart guy, but he's been know to lose his composure easily at time - witness the last game played between the team. When Chara is rattled, he gets mean and take dumb penalties. At 6' 8", if he commits a foul, the refs can't miss him. We all like this guy much better in the penalty box. As the Bruins will be targeting Komisarek much the same way, a lot of tit for tat will go a long way.

2 - Shut down Kessel. Among Bruins forwards, Kessel has the best rockets. The speedster can blow by the Habs D with ease if he's given the room, so it is key that he be neutralized. The Canadiens must do to him what the Bruins will attempt will Kovalev. Kessel was a wicked shot too, as we've seen, so he has to be kept to the perimeter at most time. Kessel's drawback is he is as tough as a wet teabag, rough him up and he disappears for stretches. Julien took him out last season because he'd already vanished, and when he returned, he helped the Bruins stretch the series to seven. 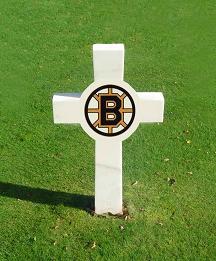 3 - Pressure on the Bruins D. Boston's defense is not all that much stronger than Montreal's. Chara is the difference maker on their side, as Markov is for the Canadiens. Boston's blueliners are a slow footed group, and the Canadiens cannot win this series without using the speed that is their strongest asset. Which leads to...

4 - The Canadiens forcing errors with their speed. The Habs must get the transition game flowing with and / or without Markov in the lineup. My bet is that he plays at least one game in Boston! Either way, the Canadiens will have to break through to the Bruins end with good bursts of speed to keep them on their heels. If there's a lot of neutral zone clogging, Montreal will need to soft dump or lob the puck into Bruins territory and hit on them will all they have hard and fast. Boston is usually pretty tight in the neutral zone, and they force alot of icing calls. The Canadiens have to get around this, and keep the faceoffs from their end as much as possible. Should the Canadiens accomplish this, they have a strong chance of winning the round. 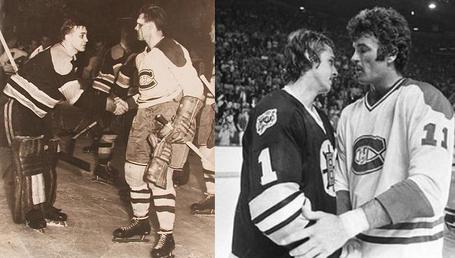 5 - Enable the powerplay. The more the Canadiens get to employ their man advantage, the better off they will be. The Habs will need a good five or six penalty calls against Boston per game, and given their general temperment against the Canadiens, getting them sitting in the sin bin is only a matter of relentlessness. Of course, the Bruins are well aware of Montreal's PP potential and will try to be disciplined. Montreal has to push them to their limits, tests their patience, while remaining discipplined themselves.

Above all else here, the Canadiens must play their game, and not fall into the Bruins ploys. To force their game onto Boston, the Habs must hit the Bruins where there biggest weaknesses are.