Habs making playoffs doesn't get any closer than this

Share All sharing options for: Habs making playoffs doesn't get any closer than this

This post comes from the old notion that points won in October and November, can make a huge difference in the standings come April.

I found an interesting tidbit of information from The Soft European, an overseas Habs site, regarding how close the Canadiens came to missing the 2009 playoffs.

"Everyone knows that Montreal barely made the playoffs. But no one seems to realize how close the Habs were from missing it. In the end, the difference between playoffs and holidays was one little goal, scored in January."

What the Soft European is referring to, is the season series between the Canadiens and Florida Panthers, as the two clubs finished with identical records of 41-30-11. As the two teams were essentially tied for eighth spot, tiebreakers were used in order to determine the higher seed. These tiebreakers came into effect during the Canadiens game in Boston this past Thursday.

As wins total of both teams are equal, the second tiebreaker becomes the teams record in game against each other. The Soft European digs a little deeper and pinpoints exactly where the season series between the Habs and Panthers was won.

Games on October 20 (3-1) and December 29 (5-2) gave the Canadiens a 4-0 points lead in the season series. The deciding game, little did we realize, was played on January 4 in Montreal, and resulted in a 6-5 shootout win for the Canadiens.

Andrei Kostitsyn's second goal of the game was scored at the 3:58 mark of the third period, and brought the score to 5-3 for Montreal. The Panthers added two goals later in the third to force the game into overtime and a shootout. The overtime point gave Montreal the extra point, its fifth in the series, and clinched the season series between the teams. Andrei Markov decided the game with a nifty backhand on the Canadiens third shot in the shootout.

The Panthers had a slightly better goals for differential: plus-3 to Montreal's plus-2.

Seeing as the Panthers came back in that January 4 contest, that second Kostitsyn goal turned out to be a biggie. It is, in hindsight, as important as Matt D'Agostini's second goal, making the score 4-3 for Montreal this past Thursday against Boston that officially helped clinch a playoff berth for the Habs.

When everything is broken down, these two places are where the playoffs for Montreal were decided. The Panthers won the season's final meeting on January 29, drubbing the Canadiens 5-1. Had they won the January 4 game in regulation, the season series would then have been tied at 4 points apiece.

Being that the clubs won loss record is identical, and that the season series could have been tied, the next tiebreaker would then have become goals for and against during the season.

NHL.com states tiebreakers 3 and 4 this way:

4 - "The greater differential between goals for and against for the entire regular season." 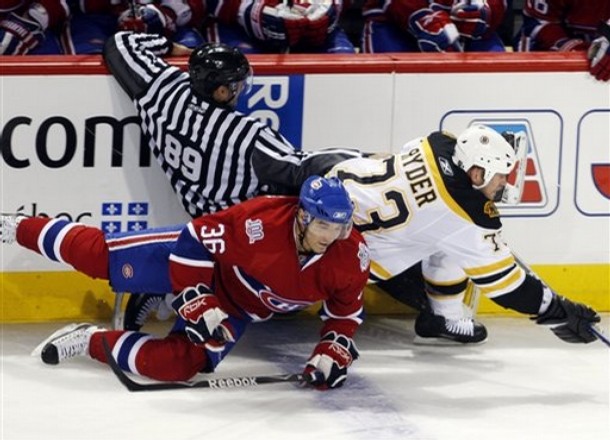 Imagine the scenario had Montreal gone into its final game against Pittsburgh last night, needing to not only win, but say, emerge victorious by three or four goals.

How would you like to have seen the Habs go after Crosby, Malkin and company with Carey Price sitting on the bench, pulled for a sixth attacker.

This has actually happened once before in Canadiens history, and it wasn't pretty. The Habs were playing Chicago in the last game of the 1969-70 season. They had to beat Chicago to get into the playoffs or score enough goals to surpass the Rangers if they lost. Midway through the game, they pulled their goaltender, and ended up getting pummelled. Complicating matters were the Detroit Red Wings, who played the Rangers earlier in the day. Detroit pretty much let the Rangers have their way with them. as they rested Gordie Howe and several other key veterans. The result: the Rangers fired 65 shots at the Rangers net, scoring a 9-5 win. The Habs cried conspiracy, as it made the Canadiens task against Chicago that much tougher - almost impossible in fact. You can read all about it here, and see how the Rangers and Red Wings practically conspired to oust the defending Cup Champion Habs.

I don't remember this particular game, as I was seven years old at the time, but I'll never forget my father's fury as he listened in on the radio.

Be thankful we did not have to live through such a thing this season.