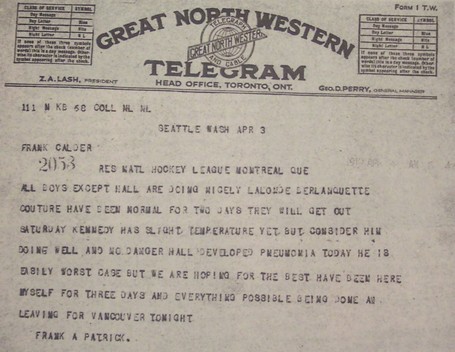 Robert L note: This is kinda goofy, considering the Habs hankering for a Cup win in it's 100th season. While it hardly looks like it could win it's 25th Stanley Cup on ice, they may be retroactively awarded what would have been the team's second Stanley Cup, from the cancelled 1919 Cup final, giving the Canadiens 25 Stanley Cups in total. No big woop celebrations over this one, all of the players from that season are dead!

Here's the translation from this morning's La Presse piece on the unfolding story.

The Hockey Hall Of Fame and NHL officials are currently investigating the possibility of awarding the 1919 Stanley Cup to the Montreal Canadiens.

That season's final, the lone NHL season barring the 2004 lockout in which a Stanley Cup winner was not awarded, was cancelled 90 years ago on April 1, 1919. Game six of the series was to be played that evening.

At the time of cancellation, the series between Montreal and the Seattle Metropolitans was deadlocked, with each club having won two games, and the fourth contest of five having ended in a scoreless tie.

Recently unearthed documents certified to be from the estate of former NHL president Frank Calder, claim that the final, which was cancelled due to an influenza epidemic in April of that year, should not have been declared a draw between the Canadiens and the challenging Seattle hockey team.

Records from the day, and in Calder's possession, originally assumed that the Seattle club accepted the Canadiens forfeiture of the series based on the fact that the Montreal team were not able to dress enough healthy bodies to compete in the final contest. According to Calder's notes, he later learned that the Metropolitans club were also unable to dress seven healthy players, but he decided after some reflection, to leave well enough alone.

Stating in his diary notes that he feared the NHL would suffer court proceedings either way, he allowed the "no decision" ruling on the Stanley Cup to stand. Calder later stated in his notes that he never chose to revisit the issue for fear that it would taint his legacy as NHL president. 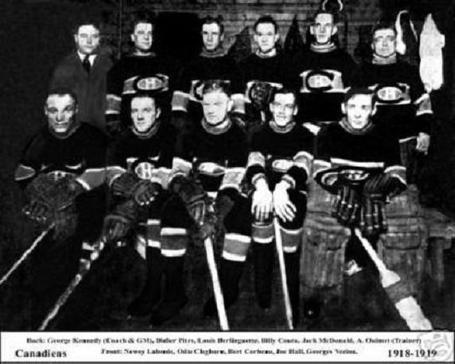 According to HHOF sources who have seen Calder's notes, the Seattle club, by mutual agreement, chose not to pursue a claim on the Cup when Calder learned of the hospitalized Metropolitans players. As it was that the Canadiens forfeited first, the Cup would have automatically fallen into Seattle hands, but in what was termed as a sportsmanlike agreement for the day, the Seattle chose to not lay claim to Lord Stanley's mug.

What Calder later agonized over in his notes, was a discrepancy between National Hockey League bylaws, and those of the Pacific Coast Hockey Association in regards to the Challenge Cup rules. While the basic agreement sets out such standard rules as alternating seven man and six man games, nowhere does detail the winner in the event of a double forfeiture. 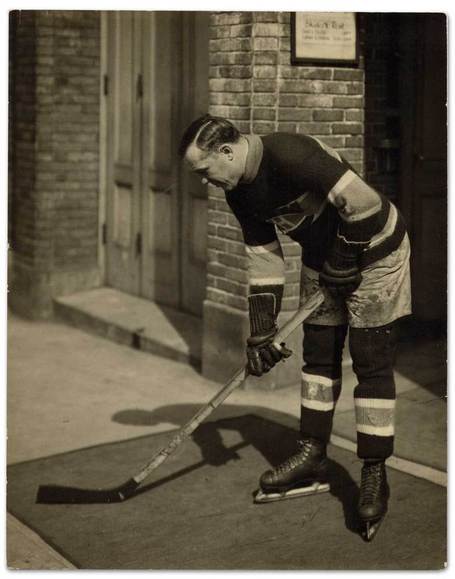 The gist of the question sits therein, as then Canadiens owner George Kendall, at the time hospitalized along with two of his players, was nowhere to be found to accept the Seattle forfeiture. PCHA regulations had no precursor for a double forfeiture, whereas the NHL terminology decreed that the winner of the final series game played, be declared the Cup winner.

In that such scenario, the Canadiens as Game 5 winners, would have, and should have, been declared Stanley Cup champions as victors of the last game.

The Hockey Hall Of Fame and the NHL have gone over the Calder diary details, and are expected to make a pronouncement soon.

The Calder notes were recently made public, and of court record, due to a divorce procedure involving an estate holder who is the great grandson of the former NHL president.

Calder served as NHL president from 1917 to 1943. The Calder Trophy, awarded to the NHL's best rookie, is named after him.

Shortly after the cancellation of the 1919 final, Canadiens defenseman Joe Hall perished from the effects of the influenza epidemic. Team owner George Kendall battled with the virus for two years, finally succumbing in 1921.

For more on the story, and the 1919 season, click these links.