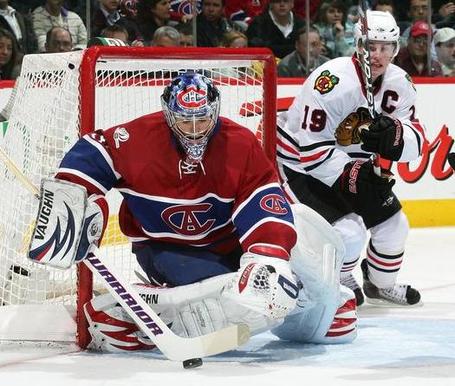 With an airtight 4-1 win over the Chicago Blackhawks, the Canadiens played one of their best games of the season at a most crucial moment.

You know the Canadiens have played one of their best when there are several strong storylines to pursue in telling the tale of this game's tape.

It starts with the battle of netminders between Cristobal Huet and Carey Price, who just over one year ago shared a mentor and prodigy bond in Montreal. Both goalies of course, would be geared up for this one - one to prove Bob Gainey erred in trading him, and to other to prove him right.

The battle started with a whimper for Huet, as he was barely awake and beaten 25 seconds into the game by a sly Alex Kovalev. Looking at the surprising play once more, it's almost as if Kovalev called for a drop pass from the Chicago defender. 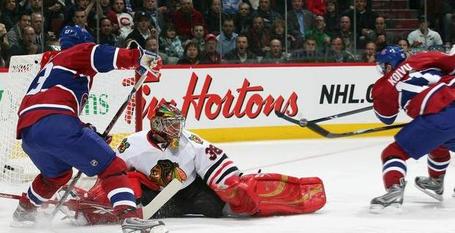 Habs fans still consider the Huet trade a bad one - maybe this game will help settle the dust. Price and Huet have similar failings - giving up soft goals at the worst times, due to either a lack of focus or a habit of being easily distracted. Gainey went with the one he felt had the most immediate future in Montreal, while Huet went to Washington and helped Bruce Boudreau steal the Adams Trophy from Guy Carbonneau. Thirteen months later, Price has just played perhaps his most technically sound game in weeks, while Huet is a 5 million dollar backup that blew this game and caused his team to slip from fourth to fifth place.

It is of big time comfort to the Canadiens that Price rose to the challenge this game brought. Not only was he up against Huet, but the Blackhawks bring bring enough offensive weaponary to unhinge most goaltenders of frail state. There was much to like about Price in this one, from what wasn't seen from past efforts. Price saw every puck except the one that beat him. He rarely flopped and overplayed shots. Of the few rebounds he allowed, he was catlike in being at the shot before the shooter. 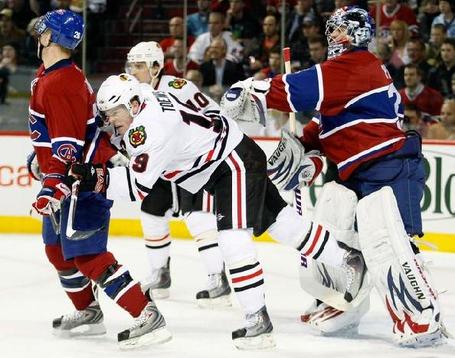 Evidence of Price's composure came when he gave a hard glove shove to Jonathan Toews, who had parked his derriere next to Garth Brooks. The swat served notice that he was in command, and he rarely needed to deal with such traffic again.

Price later made quick work of good chances by Toews, Sharp, Kane and Ladd, and rarely saw them a second time. His play left his defenseman focused on what was before them and not behind them, and all that neat work added up to a confidence building night for him.

The top line of Koivu, Tanguay and Kovalev, and the Habs PP, gave the team another strong game with two goals. With a little luck, there might have been more. Tanguay aimed at a vanishing five hole on Huet during a clear break, and made a pass too many on a close in chance with Koivu earlier. As time passes, the trio should gel even more, learning to shoot instinctively when it earns chances.

Guillaume Latendresse, despite a zillion naysayers, has arrived as an NHL player of merit. He knows his role, sticks to his game, is less of a defensively liability now that he's picked up some speed. Latendresse also plays with a center who he can read inside out, which removes a cerebral weight from his game. Soon he will begin to garner a reputation as a tough player to drive from the slot. 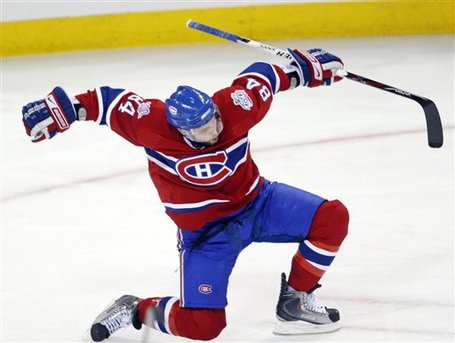 Latendresse's previous highlight reel goal was a nifty wrap around and tuck in from the back of the net. Last night's goal saw him circle the net similarly, waiting for his bank shot off the Canadiens 1945-46 Cup banner to fall behind Huet. It was one of the funnier goals I've seen in a good spell. That puck had more airtime than a Maguire ad lib.

Chris Higgins continues to excel in his role as a fourth liner shutdown player, and is even better on the PK. Higgins is all energy and deceptive speed, and causes other top line forwards fits as they are hardly used to facing a fourth line of such strong calibre. If the Habs second unit of Plekanec and the Kostitsyn's start to produce at some point, the importance of the fourth line's work will be even more remarkable. If this team can get four lines rolling as they should, imagine opposition coaches dealing with matchups.

Other less spectacular storylines from this one involve a team that has settled down greatly from four games ago. Players seem to have renewed confidence in themselves, and are sticking to simple things while getting the job done.

Maintaining Chicago - the NHL's fourth best offensive team - to 29 shots speaks volumes for how far the Canadiens have come of late. Montreal made neat work of the Blackhawks while defending. Few of the Chicago chances produced rebounds. Credit a confident Price, and a defense that seldom strayed from playing man on man.

It isn't hard to notice of late, that the Canadiens defense isn't running from position to hit everything in sight as it had been. It simply settles for taking the hits that plays offer them. The whole deal is rendered much easier now that forwards join in on the work by getting in the laneways that opposing forwards used to cruise through unhindered in outmaning the Habs D.

Oddly, it all adds up to the team accomplishing much more by doing a lot less. Previously, when it had been working harder and working badly, all kinds of precious game energy was being expelled at the wrong time and in the wrong places. This energy efficient version of the game allows everyone to concentrate better on individual tasks within the team concept. 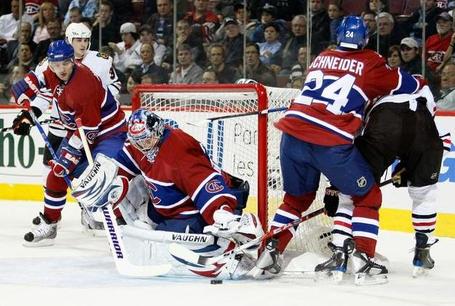 It has taken Gainey 10 games to implement his ideas, and the team has six more games in which to allow it to cement.

What was very inspiring to note after this game was through, was how much the club with this effort, resembled last season's team at this same point in the season. One year ago, Price was stoning foes while playing clean and unspectacularly, the PP was jumping on chances to win games, the PK was humming like a well broken in engine, and the team was winning games with strong contributions from all participants.

It makes one wonder exactly where the Canadiens would be sitting if it had received full seasons from injured players such as Koivu, Tanguay, Lang, Latendresse, Higgins, Komisarek and Price. These seven players conbined to miss a rough total of close to 140 man games. If one additional win per player isn't an exaggeration, the Canadiens would be at an even 100 points presently, three wins ahead of last season's pace, and in second behind the Bruins in conference points right now.

And of course, there wouldn't be all this chatter about a disastrous 100th season.

The most important thing of all to note, is that it is not the number of points a team ends a season with, it is the mentality in which it begins the playoffs that is key. Should the Canadiens finish out the season playing as well as they did against Chicago, and still manage no better than eighth spot, it would hardly be a disaster.

Who wouldn't bet that the Bruins, atop their Eastern Conference perch, are hoping Montreal finishes seventh rather than eighth?

In one clean swoop, the Canadiens win last night eliminates both the Maple Leafs and Senators from a mathematical chance at post season play.

It's now down to a three team race between the Habs, Rangers, and Panthers for the seventh and eighth playoff spots with five or six games remaining. Somewhere in that time span, one of the three clubs will slip on a banana peel for a game or two, costing them a spot.

The Rangers have five games remaining, and not a sleeper in the bunch.They play in Carolina Thursday against a hot Hurricanes team then travel to Boston on Saturday. Next week, they will host the Canadiens Tuesday, and finish out the season with a home and away set with the Flyers.

The Panthers aren't up against as tough a group of team in their final five games. They host Atlanta on Friday and pay them a return visit next Thursday. Sunday, Florida hosts the red hot Penguins before travelling to Philadelphia on Tuesday. They finish up next Saturday at home to the Capitals.

Montreal, as luck would have it, have an additional game in hand on their rivals, with three warmup games against non contending teams before things get truly serious. They are in Long Island Thursday, Toronto on Saturday, and return home against Ottawa next Tuesday. After visiting New York on the 7th, they travel to Boston two nights later, before ending on Saturday against Pittsburgh.

I'll go out on a limb and say Montreal gains 9 of a possible 12 points from these games.

It should be wild fun, now that the Canadiens are looking all the more ready for it. 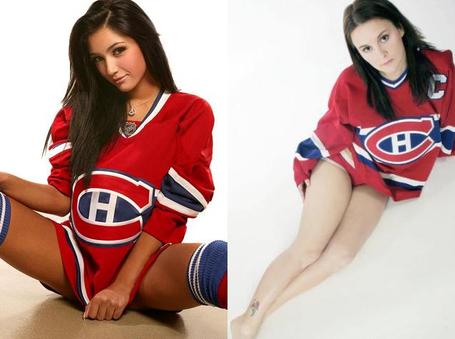 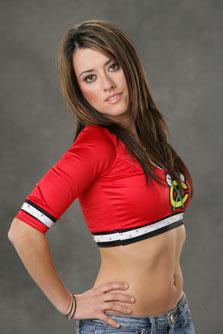