Gainey Gasses His "Best Acquisition" After Win In Dallas

Share All sharing options for: Gainey Gasses His "Best Acquisition" After Win In Dallas 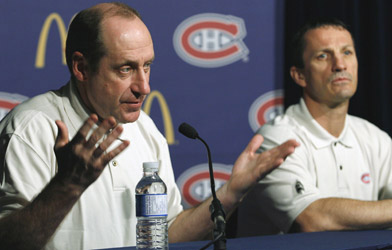 Some will suggest it was long overdue. Others will declare it a complete and inexplicable surprise. The man whom Bob Gainey named as his best acquisition since taking the club reighns in 2003 - Guy Carbonneau - was fired sometime today, with an announcement made public just after 5 p.m. this evening.

Talk about you bowling ball strikes!

Despite much consternation about coach Carbonneau's methods, few could say they've seen this coming so abruptly. In terms of typical Gainey moves, this is straight out of left field.

A press conference has been called for 7 p.m. this evening, and I have to wonder how the explanation will be worded by the man of few words.

Gainey takes over as coach, starting with a game day practice tomorrow morning.

I will be curious to see if the term "philosophical differences" enters the explanation for the move, as it was a long held thought that no two hockey people were more linke minded than Gainey and Carbonneau.

It is likely to be evoked that personel problems between the coach and players had to do with Gainey's move, as there had long been speculation of communication problems between the team and staff. While some players seemed to go through spells of on ice indifference, there were those who continued to fight hard for the team.

Earlier on CKAC today, it was mentioned that the team flight from Dallas did not return to Montreal until 3 p.m. this afternoon, when it is usually the norm for teams to fly home directly after road trips. On the west coast swing two weeks ago, the Canadiens took a red eye from Vancouver, landing in Montreal at 6 a.m.

Apparently, certain players on the club were unhappy to be staying over in Dallas, and it was initially thought that the annual rookie dinner was being held.

Flights for the team are usually pre - planned well in advance, but word is a schedule change was in the offing, as Dallas is home to Carbonneau's daughter, who is married to the Stars captain Brendan Morrow. It is unclear at this point whether this story is mere speculation or not.

Gainey's conference may answer such queries, but it is doubtful that the GM will say much to the detriment of Carbonneau, a longtime friend and team mate.

It will likely be speculation - hardly commented upon - that this move was ordered from above. It could well be that owner George Gillett, or president Pierre Boivin were disatisfied with the team's standing, as it edged into eighth place prior to last nights win against the Stars.

For myself, I'm pretty bowled over by the news. I had figured, like many, that Carbonneau would last the entire Gainey tenure, for better or worse.

I'll have more on this latter, after Gainey speaks.

Analyst Normand Flynn of RDS mentioned at 5:40 PM that Hamilton Bulldogs coach Don Lever will be joining Gainey behind the bench.