Canadiens Turn The Tables In Dallas

Share All sharing options for: Canadiens Turn The Tables In Dallas 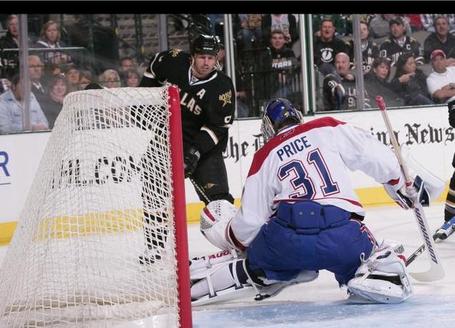 It's nice to be back at it here after a wild weekend that included a birthday, three trips to Gananoque for hockey games, setting the clocks ahead an hour, and a strong game by the Habs that has turning point written all over it. I'll touch my weekend a bit at the bottom of this.

I say turning point - which I admit is a brave proclamation for a team in a fragile state - because I saw several things in this game that told me our real Montreal Canadiens, a team we were unsure still existed, are back in recognizable form.

There's a bunch of reasons why I'm out on a limb and stating this.

It starts with Carey Price, who was boldly started by coach Carbonneau for a third consecutive game in place of the ailing Jaroslav Halak. Including the loss to Atlanta, Price has put in two very solid - if not faultless - efforts, back to back for the first time since early January.

That is not just good news, it's big news. If Price can continue to play like the franchise goalie he has been deemed to be and has showed he could be in better times, then a lot of what the Canadiens ship is about will be righted. His play in these past two games ought to calm everyone down, and with Halak ready to challenge him for games, the Canadiens goaltending seems primed for the final stretch.

Here's hoping that Carbonneau is as ballsy in deciding to rotate the pair and let the chips fall were they may. It's key to the club's success that he get the best from both without letting either get cold or complacent, and name a number one once the playoffs start.

Another reason to get excited from this game, was the play of the Canadiens special teams. While the PP wasn't credited with a goal - Alex Kovalev did pop one in two seconds after Mike Modano's penalty expired in the middle frame - it performed well in the few chances it had during the game. The PK was where the Canadiens impressed, and they have making great strides in this area for a good while now. Dallas managed one goal, in a 5 on 3 occasion, in a total of ten opportunities.

The Canadiens gave the Stars four such 5 on 3 chances, with the last of the four beginning at the start of the second period. They foiled and frustrated Dallas each time, practically limiting scoring chances to nil. Tomas Plekanec - the best Hab of this game - was all over the Dallas PP at every chance. He won key faceoffs, clogged the passing lanes, tipped the puck off countless times, and played some of the most instinctive shifts I've seen Canadiens forward play in a good while. It was impossible not to see the effect of Carbonneau's teachings rubbing off on him. There's something neither receive enough merit for. 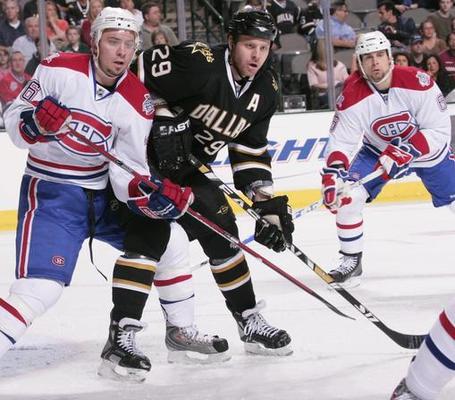 One change affected by Carbonneau for this contest, saw Andrei Kostitsyn freed from playing on a line with Kovalev, and moved to a trio formed by Koivu and Tanguay. Part of the trouble Kostitsyn has with Kovalev is that they can rarely play well at the same time. If Kovalev is on his game, it takes from Kostitsyn, and their timing never seems in synch. Kovalev is a player who improvises too much for Kostitsyn, who's instincts tend to fall out of whack when he cannot read his linemates. With Kovalev, Kostitsyn will dart into open areas expecting a pass that never comes. Plays breakdown leaving him in compromising positions, and he ends up playing timid hockey, rarely attempting to do anything creative.

Last night, alongside Koivu and Tanguay - two players who will work to find him on the ice - he not only regained consistent feeders, but he was composed and comfortable enough in all his decisions that the important physical element to his game returned. For Kostitsyn, the more offensive chances he gets, the more he pursues the puck. You could see a big difference in his play and how it affects him when he's more invloved. He played in the literal meaning of the term, as opposed to watching the game pass by, as he tends to with Kovalev. This new line looks promising.

We likely wouldn't giving though to the efforts of Price, Plekanec, Kostitsyn and others had the Canadiens not responded so well beginning from the start of the second period. The site of Koivu, Kovalev, Komisarek and Stewart all sitting in the penalty box didn't bode well for the rest of the game, but the thought came to me that if they could get through it and get over the hump, it would inspire them. It seems to be exactly what happened in part.

Now readers here will see me coming a thousand miles away with this, but the gesture posed by Gregory Stewart late in the first period - unsuspectedly knocking Steve Ott on his butt and taking a round out of him - changed the entire complexion of the game. It was exactly what Georges Laraque failed to do three games ago against Buffalo. The effect it had on the game afterwards, it would take a hockey idiot not to see the Canadiens were skating in calmer waters. It made themm taller, as the saying goes.

Up until that point, Ott was running roughshod over every Hab he encountered, including captain Koivu. Once Stewart had slammed him to ice and got in his face with his fists, Ott kind of quietened down, and was no longer the factor he had been in the first period. Notice there was no polite invitation from Stewart, just a message delivered prompt and swift the way it has to be done.

It's all good news with 16 games remaining. It's motivating to see the goaltending work it's way back to a dependable state where it can win the team games. It's comforting watching team toughness turn the tide in a game that was getting away, and seeing how primed the players were in light of Stewart's actions. Having efficient special teams working so perfunctionary as to be a detriment to opposing teams sure don't hurt. Throw in a goal scorer about to find his way, a center who has brought his game back to being worthy of top line status, and a crew of hard hats all pushing in the same direction, and you have a team many are ready to believe in again.

But, and it's a big "but", this was one game. What the Canadiens needs to be, is less reactive in games. They need to come out of the gate more composed. The game plan isn't something to fall back on midway through, it is something that needs to imposed from the drop of the puck.

The Habs are far from being out the woods, of course, but the situation is not so dire that hopelessness be at the brink of a loss.

I've yet to write off this team, or give up on any of it's componants. The measure of the character of this team will show itself down the final portion of the schedule where no games are easy. With each game, they are learning a great deal about the gears and pistons of winning. They've put tons of lessons behind them this season, and learning from the experiences as they go. With ten of sixteen games at home, everything is in place, and in their control, to make the best of a season that has had more than it's share of sour notes.

The fun is just beginning! 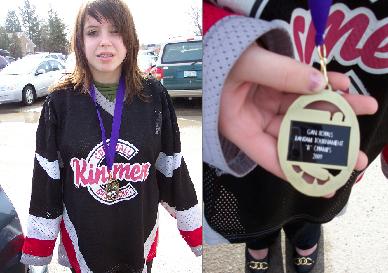 On a side note, my kid had a great weekend in Gananoque, playing perhaps her best hockey all season. Her team, the Black Ninja's won the tournament "B Pool" on Sunday, beating to Gloucester Retros 4-1. My daughter didn't pop in any goals this time around, but had four assists in three games. I'd never seen her play as tenaciously as the final two games. She was literally steamrolling opponants. She drove the other team nuts checking them to a standstill. Alot like Plekanec this weekend, she did some great PK work. She's usually at center for the first 90 seconds of each penalty, and in nine opportunities, opponants scored no goals while she was out there.

Last Friday I posted some Habs girls. I found a goldmine of pics on the net....hee hee! For every Habs game from now until season's end, I'll post two girls for every goal Montreal scores in games they win. Lose, and we get nothing! Enjoy.