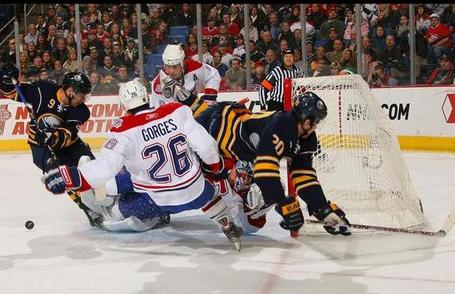 Watching the Canadiens implode against Buffalo on Wednesday night, felt like a knife in the heart. The game had all the set up of a bad joke, as fans were pumped for so much more.

Four wins in a row, as untidy as they were, tends to set up hopes, as false as the sometimes can seem.

A confident general manager on trade deadline day, who professes faith in his troups while making no hasty moves, adds to that feeling.

A wickedly dominant first period gets your blood flowing in all the right directions.

I could pound a grocery list of ills out on this keyboard at the moment, but it would truly sicken me. There was so much last night that got away from the Canadiens, that this post would run an endless rant. Instead of pulling you into my own personal bitchfest, I 'm just going to dwell on two first period plays that occured in the the last two games that I believe are relevant at this point.

During last night's game, there was one particular incident in the first period that set the tone for the game that needs to be brought up. Before going there, let's take a little trip back to Saturday against the Sharks.

Against San Jose, the Canadiens jumped out to a 3-0 first period lead, and much of the credit for changing the tempo of the game was given to Georges Laraque, who mastered Jody Shelley in short order, after the Canadiens forward threw a solid body check on Sharks defenseman Dan Boyle. It's a given, that Laraque's bout - one he wasn't searching out - added to the atmosphere in the crowd.

The game, however, is played on the ice, and Laraque can't affect it any further from the penalty box.

When San Jose gave the Canadiens it's lone powerplay of the game, and the Habs made them pay for it rather quickly, the Sharks smartened up in hurry. The momentum gained by taking the lead boosted the Habs players, and they hit for two more before the Sharks knew what hit them. Once San Jose understood that it might not be a good idea to try to run the Canadiens out of their rink physically, they settled down and stuck to hockey. Soon enough, they countered with two goals of their own, and Montreal spent the final 30 minutes of the game defending more than they did trying to pad the slight lead.

Over the last half of the game, it was all Sharks, but I doubt anyone thought to underline Jody Shelley's earlier defense of his team mate as a rallying point for his team. Even though the fight occured before the Canadiens struck for the first time in the game, Shelley's stand had an affect.

During last night's game in Buffalo, the Canadiens missed a great opportunity to stick up for one another, and when they failed to, it gave the Sabres wings.

Late in the first period, Buffalo's Daniel Paille cut in from the left side on Carey Price, and ran him hard as he went to the net. The hit knocked Price for a good, and he was slow to rise. Paille, who somehow wasn't penalized on the play (odd, considering what Scottie Upshall was called for on Halak in overtime two games prior), was roughed up in tendered ways by Josh Gorges. Paille got nothing more than a little lip from Kostopoulos, and that was that.

There was no penalty, although the ref blew the play dead with a loose puck.

There would be no power play goal to follow, acting as killer to such liberties.

There was no retribution on Paille.

There needed to be. 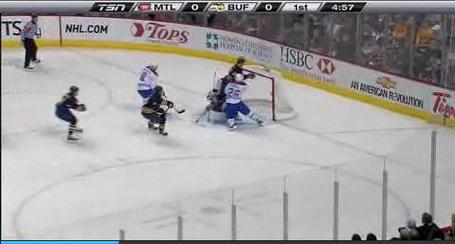 With the Canadiens powerplay misfiring on three chances earlier in the period, and the team fumbling on this gut check, they were meat from this point on for Lindy Ruff's Sabres.

Not long after, the Sabres were pressuring the Canadiens in their zone when Mathieu Schneider got tagged for clearing the puck over the glass. Buffalo scored on the ensuing PP, and the Habs were never to find the momentum they had enjoyed earlier in the period.

Laraque had three more shifts to find Paille. He sent was out with Plekanec and Kostitsyn once, twice with his usual mates. After it became apparent that little would be done, the game was over as soon as Buffalo added to their lead in the second period.

Carey Price has been punctured with darts for this game. Word is that he was unconsolable afterwards. Steady as he could have been expected to be until that point, he deflacted in synch with his team.

He needed some help from his friends last night, and he needed his mates to step in for each other. 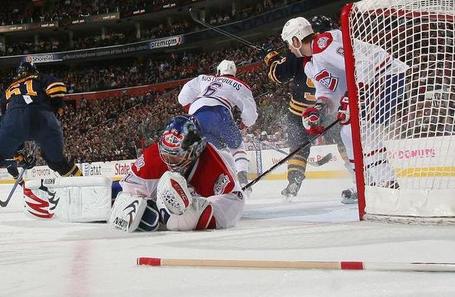 The "team toughness" term had been brought up again after recent games, but the headmaster in charge of helping players grow a few added inches was nowhere to be found. Laraque left the game with a bruised foot, the team ended it with what ought to be a bruised ego.

Price will get the brunt of the blame, but this game was lost before he let in a goal.

Maybe next time, he'll need to toss the blocker and trapper, or swing the paddle, Ron Hextall style, and take matters into his own hands.