The First Of Many Stanleys

Share All sharing options for: The First Of Many Stanleys 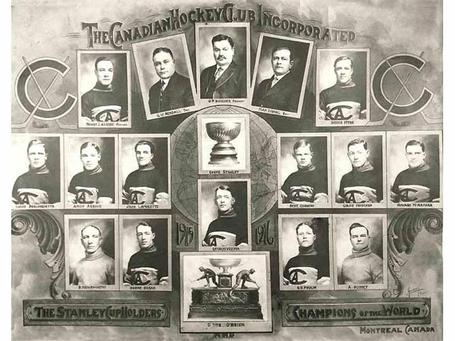 Ninety three years ago, on March 30, the Canadiens won their first Stanley Cup. I don't believe in numerology much, but doesn't it weird you out that in the Habs centennial season, that the year of their first and last Cups add up to the present year?

The Canadiens had endured a miserable season in 1914-15 and team owner George Kennedy was determined that the situation would not repeat itself. He offered contracts to defenseman Goldie Prodgers and Howard McNamara - who he'd soon name captain - as well as Georges Poulin and Amos Arbour. Later in the season, Kennedy would add Skene Ronan, the NHA's leading scorer from 1911-12.

The addition of Ronan caused a bit of a stir, as the Canadiens had only been allowed to dress only one english speaking player per game. Dressing Ronan in a January 20 match against the Quebec Bulldogs bent the rule, and a complaint was filed with the league. Agreements had been previously drafted whereupon the Montreal Wanderers, the city's other NHA franchise would be stocked almost entirely with english speaking players. From the Ronan incident on, and after a $100 fine and the forfeiting of a point gained in a tie game, the language restrictions were dropped for both teams.

Newsy Lalonde, who had played only 7 games for the Canadiens due to a contract dispute the previous season, returned to the team full time, satisfied with his new deal. He would center a line featuring Jack Laviolette on the left side and Didier Pitre on the right. Pitre would total 39 points ( 24 goals,15 assists ), but officially the scoring championship was won by Lalonde with 28 goals, as assists did not yet count in the scoring race.