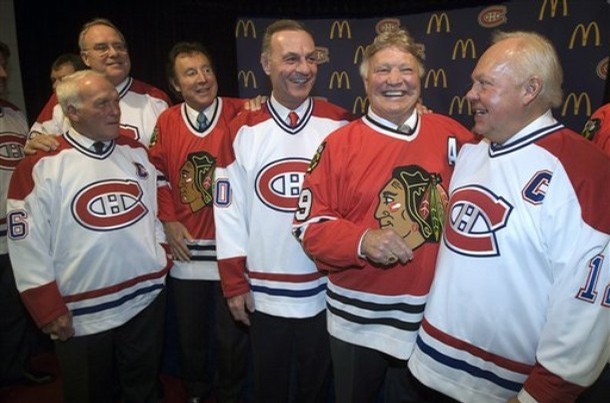 Off the top, I must confess my love of the Chicago Black Hawks. At a young age, when the Canadiens first captured my imagination, the Hawks were dueling it out with the Habs in two of three Stanley Cup Finals between 1970-71 and 1972-73. Many of my most cherished, and longest dated hockey memories and thrills, came when these two storied franchises battled it out in those seasons.

Just like the Boston Bruins and Canadiens of the early 1970s, the Black Hawks were a force bolstered with loads of character players - characters in their own right!

I was nine years old the first time I saw these two teams meet, and I'll never forget the sight of elegant and elusive Bobby Hull, the tactical and sly Stan Mikita, phantom Jim Pappin, the acrobatic Tony Esposito, the solid defensive pair of Bill White and Pat Stapleton, the classy Pit Martin, pest Keith Magnuson (a player I loved hating), and coach Billy Reay, who for years I confused with Toe Blake due to the ever-present fedora on his head.

The Black Hawks roster then was filled out with savvy and experienced veterans strong in both ends of the rink. Players such as Cliff Koroll, Chico Maki, Lou Angotti and Eric Nesterinko made sure that rivals worked for their goals, before meeting up with stopper Esposito, a former Hab that got away.

Perhaps I didn't realize it fully at the time, but the Black Hawks left their mark on me in similar ways that the Canadiens did back then. It was not attached to Stanley Cups per se, but there was a mystique to the team that was hard to put in words. The Chicago Stadium, in as many ways as the Montreal Forum and the Boston Garden, seemed to have that sacred hockey temple thing about it. Games played there were big games, it always seemed. The Stadium had that massive pipe organ, which somehow managed to blast its majestic intensity through tinny little TV speakers out onto the living room floor from where I watched games.

Maybe it was the innocence of that age and time, but it felt a lot less like the broadcast was being thrust into my living room than I was being siphoned into the TV screen, into dreams of a bigger world where everything was larger than life itself.

Maybe it was just the Chicago Black Hawks crest, unchanged to this day, that decided it would own my brain.

In my life, I've seen numerous beautiful images. From sunrises to sunsets. The eyes, lips and looks of a girl I chose to call my own. Our children's smiling faces, through laughter and discovery of life. Next to those imprints, the "CH" logo in red, white and blue holds strong.

It is difficult to describe, but the "CH" has its way of owning a fan, just as the eyes of a lover can. The Blackhawks Indian head crest has an equal effect. In truth, I've never been able to decide which club has the most beautiful hockey sweater and logo. I'd declare it a tie. It's like choosing which one of your two children you love most. I've never gone too deep in trying to understand such a thing. It could just be that the colour red gets to me, because the Detroit Red Wings do something for me as well. In fact, five of the Original Six teams project logo allegiance. It's not hard to grasp the tie in that a maple leaf has to Canadian hockey fans, and the black and gold gold spoked "B" of the Boston Bruins logo just jumps out like a Superman crest, punched into the sky.

Only the lame New York Rangers insignia has no imaginative might. Tex Rickard, the clubs founder and a native Texan, wished to nickname the team as the "Giants." Before Rickard had the chance, NYC media began calling the club Tex's Rangers, and the name stuck. Rickard later wrongly assumed that the "H" in the Canadiens logo stood for "Habitants". In the age of snake oil cures, Rickard's main claim to fame was as a boisterous circus promoter. True to the deceptive spirit of the 1920s, Rickard's legend endures. The Rangers hockey club remain uncomfortably named, the Habs moniker has lived on despite the fact that the "H" stands for hockey, and Madison Square Garden circuses still manage to screw with the Rangers home ice advantage come playoff time.

As for the Blackhawks logo, it was derived by Major Frederic McLaughlin, a coffee tycoon back in the day, who afforded himself the luxury of a franchise of the sport of hockey — a sport that had caught his fancy in the 1920s. McLaughlin had been a commander in the 333rd Machine Gun Battalion of the 86th Infantry Division in World War I, and he named the club after a Sauk Indian, Chief Black Hawk, who was a prominent figure in Illinois history.