Habs Trashing Of Thrashers, A Tonic For The Troops!

Share All sharing options for: Habs Trashing Of Thrashers, A Tonic For The Troops! 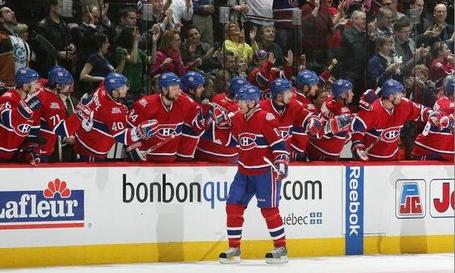 Whoa! Who saw this game coming!

Just as the Canadiens were getting everyone used to mediocrity, they whip up a 6-3 trashing of Atlanta from their bag of tricks. It was no small victory by any regard. It there was ever a win, and a type of win at that, perfectly timed to have positive consequences, this was it!

This win had everything that had missing in recent games (weeks, months, most of this season!).

For starters, after an unconvincing first period which saw the Canadiens take the lead for a change, there seemed to be a much greater reliance on instinct over thinking. Where there was once an abundance of nervous reaction plays, anticipation had taken over, most notably in Mike Komisarek's play.

There was cohesion and communication between defensive pairs, and with forwards helping out by eagerly joining the play at the back end. Added support from forwards, relaxed Roman Hamrlik, and allowed him to be more positional and execute simpler plays.

The transition game was ablaze, thanks to forwards in constant motion going both north and south on the ice.

Units of five were clogging passing lanes like there are supposed to, and it resulted in the team allowing close to 15 shots less than it had a habit of doing in recent games. 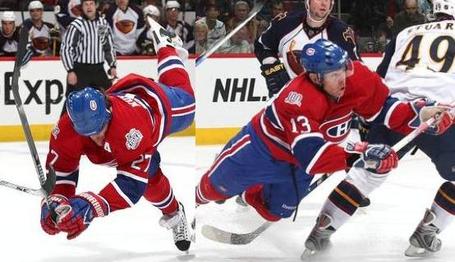 There were lucky breaks going the Canadiens way, for a change, such as Ilya Kovalchuk wringing a shot off the post on a beaten Carey Price.

Price, despite allowing one softie, was sturdy and dependable in this one. A few key saves at pivotal points allowed the team before him to play with confidence. Conversely, the lead the Canadiens gave Price, allowed him a comfort zone for the first time in a long while.

There were four lines whose composition made absolute sense, for a change. Chris Higgins on the fourth line will cause opponants great concern. Sergei playing with brother Andrei, seemed to spur the elder to a more physical and committed effort.

There was a powerplay with some punch, that struck early and often. Best of all, there was what looked to be a legitimate first line with Koivu, Kovalev and Tanguay, and it dazzled with such a display of skill grit and finesse that it had the Thrashers on their heels for a full two periods.

Placed together by coach Gainey with the idea being that for the Canadiens to win, their best players must be their best players. They were also three players being somewhat pointed as having let the team down for lengthy stretches. Not coincidentally, all three are free agents, so it what as if gainey united them as if to say, "Work out your squabbles together!" With that in mind, I've already got a name for it - the FAFU line! (Figure out the acronym, first two words are "free agent")

Tanguay serves well as a catalyst between Koivu and Kovalev, allowing their skills to mesh. Koivu mentioned before the game that there were elements of all three players that were similar. Each player has a tendency to want to carry the play and dominate the line. In the past, these facets did not mesh well, but it seems that the trio have sorted out the roles with a more precise definition. As Tanguay has the best vision of the three, he is more apted at moving from the neutral zone into the opposing end. By supporting Koivu's efforts along the boards, it allows for Koivu's presence at the net and Kovalev's cruising of the slot. Earlier in the game, there seemed to be a developing chemistry 5 on 5. It bloomed on the powerplay, where the trio gained prescious split seconds of execution.

Coach Gainey spoke after the Toronto loss of wanting the team to put together one sixty minute win, in which all facets of their game would work cohesively as they should. The team achieved its goal for perhaps 50 minutes in this one, but many wrinkles were ironed out.

In many ways, this game should spell relief for many players. The top players produced, the defenseman protected intelligently, and the goaltender gave the club what it needed. All that could be asked more, is for efficiency and consistency.

For a change, the Canadiens looked like the Habs team many feel they can be when working together. 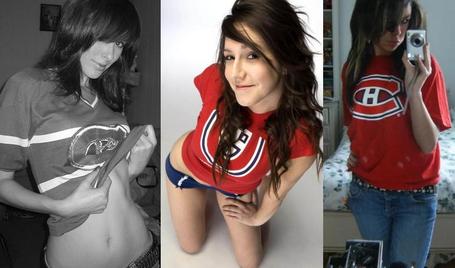 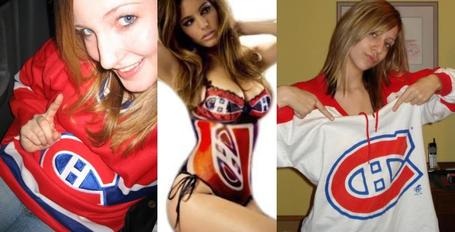 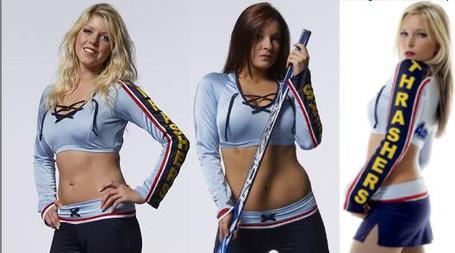