Gainey's Bench Work Not Cutting It

Share All sharing options for: Gainey's Bench Work Not Cutting It 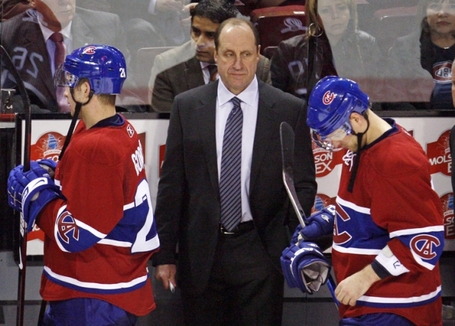 It's hard not to think back to the midseason point when Bob Gainey called the hiring of Guy Carbonneau his best move as GM.

I wonder now if he has it in him to admit that firing Carbonneau two weeks ago has been his worse move.

21,173 fans chanting "Carbo, Carbo" at the Bell last night suggests perhaps that it was.

With the Canadiens losing their fifth straight game, 5-2 to the Maple Leafs, can anyone possibly state that Gainey going behind the bench has had any kind of positive effect on the team?

Since taking over the GM's role in 2003, I've had an almost unshakable faith in what Gainey has done. I've understood most of the moves he's made, appreciated that he rarely acted impulsively, and had the greatest respect for how he turned the fortunes of the club around. On the occassions where I felt it proper than he be second guessed, hindsight usually gave reason to his acts.

The Guy Carbonneau coached Canadiens had won five of their last seven games.

The Gainey coached crew won their first in overtime, then bailed in five straight.

A dismal and disappointing situation has gone from bad to worse, and it's looked for a while now as thought the Habs won't recover in time to salvage a playoff spot. Clearly, the issues nagging this team were not ones to be solved by a simple coaching axe.

Maybe Gainey should have examined things more thoroughly before acting.

Prior to seeing a clip of Gainey's post game press conference after last night's game against Toronto, RDS viewers were informed that it was running late by a few minutes. The thinking was that the coach was spending an extra long time in the dressing room.

Not so, said Gainey, minutes later when asked. The question pointedly inquired whether the coach had given the team a lashing. Gainey simply stated that he would be speaking with players who failed to show up for game at the next practice.

He could be in for a long day.

Bob Gainey is not a demonstrative person. Sometimes, I think he needs to be. Often I feel he needs to learn how to light a fire under his players during the course of a game, and not between them. Sometimes players need to feel that the bench boss is as into the game as they are, or in the case of the present Canadiens team, even moreso than they are.

What is most concerning, is that Gainey looks totally out of his element behind the bench. At pivotal points in games, the camera pans to the Canadiens bench, and Gainey is usually seen, in statue pose, glaring cross ice.

All that viewers can see of Gainey's work, are line adjustments during the game's course. Against Toronto, with the Grabovski - Kulemin - Ponikarovski line destroying the Habs, he somehow countered at one point with the Metropolit - Laraque - Pacioretty line. Three minutes into the second period, such an absent minded mismatch caused the eventual game winning goal.

At a pivotal point in the season, in such a crucial game, such an error is unforgivable.

Coaching, when best exemplified, is seen as an alert on the fly skill, demonstrated by being on top of game shifts, and ebbs and flows in the context of particular contests. It is in essense, playing chess with against the opposing coach's moves. At its most generally accepted proficiency, it is reactionary work. At its best, it is an instinctive skill, with the person in command adapting to subtle changes on the ice, a step or two ahead of his rival.

Gainey is not only a step behind, he's still at the "fixing things between games" stage.

The saddest truth, is that Gainey's quicksand approach to things mirrors the teams most flagrant dilema. Hockey is not a game of reaction, it is a game of instinct. Proper work habits make instinct rule over reaction. The Canadiens are thinking too much, while plays pass them by. Each mistake the Canadiens make is preceded by a second of hesitation on some players part. Repetitive drills in practice are usually the quickest solution towards eliminating such habits. In fact, the habits practiced between games become the way a team plays.

Going back to basics 72 games into a season is one heck of a scary notion.

Doing such a thing on Gainey's part would be invariably admitting that the previous coach wasn't far off in judging where his team was at mentally. Curiously, six games into his manning of the team, Gainey's desperation moves now mimic those of Carbonneau.

In six games, Gainey has committed a litany of bench boobs, too numerous to run off.

It's nightmarish. Gainey the coach has put Gainey the GM's job in peril.