Share All sharing options for: Habs Outworked By Leafs - Where's The Razorblades? 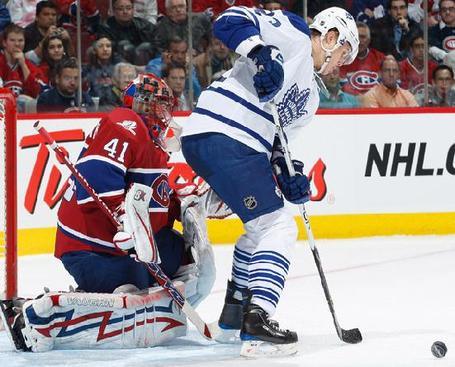 When Montreal loses to the Toronto Maple Leafs - an always proud rival - I don't run looking for razorblades. Losing to the Leafs does bum me out a touch more than losing to other clubs, but it's not the end of the world it is made out to be.

Many people won't side with this view, but to me it does not matter that Toronto are an eleventh place team, now eight points back of Montreal. Regardless of standing, when these two meet they are on equal footing. Toronto could be the worst team in the NHL and they would still play their best games against the Canadiens. It's always been that way, and it always will be. It is something that simply has to be respected.

What really grinds at me, is not that Montreal loses, but how they manage to lose games which should pump them up.

From the drop of the puck in this game, there were lackings in commitment and focus once again. The Maple Leafs came within an inch, or a fraction of a second, from scoring on the opening play of the game. By the time Montreal woke up, the score was 4-0. There was a brief glimmer of hope that a classic comeback was in the works. It wasn't to be.

A prouder team than the Canadiens on this night had a big say in that.

As usual on Saturdays, whether the Habs win or lose, I head out for a few posts game wobbly pops. Heading out the front door, I stood on my porch step and watched as the owner of a car across the street removed his Canadiens flag and placed it in his trunk.

That's depressing! Even worse is wondering when the dude will have it back up. 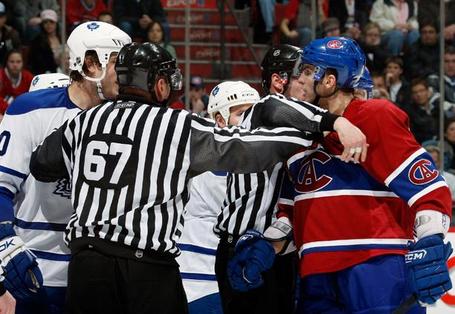 At the bar, an acquaintance asked me to name the Canadiens players who I thought looked like they gave a crap for sixty minutes. They said they could name them on one hand. I said I could probably do so on two thumbs. Of course, I'm being harsh - I might have had to borrow an extra thumb.

Of all the Canadiens, Max Lapierre was the only player that made a dent. Latendresse put in a spirited effort as well. Two guys who will surely be around Montreal during the summertime, played as though they didn't want to spend May, June, July and August answering for their team mates.

There isn't a single other good point to note about this game.

Were it not for three guys in Columbus named Torres, Vermette and Mason, the Canadiens would be in ninth place right now.

Maybe I drink to forget where I placed the razorblades! 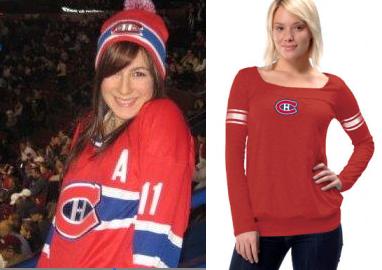