Cough It Up For Illegal Smokes, Win Habs Tickets!

Share All sharing options for: Cough It Up For Illegal Smokes, Win Habs Tickets! 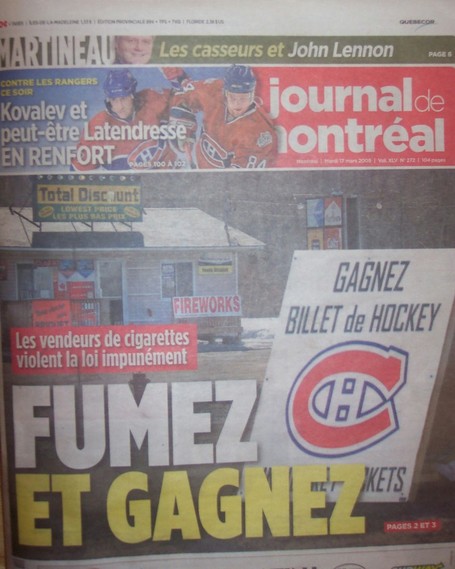 Regardless of the Canadiens standing of late, it seems the popularity of the team seems to know no bounds - legal or otherwise.

No, this is hardly another mob related player tie in, but it's good for a laugh, especially while watching the team struggle.

This little tale is from close to home, right across the river from EOPT Central in fact, on the Kahnawake reserve on Cornwall Island. As I'm sure everyone and their police dog knows, native law on the reserve differs from provincial regulation, and the sale of illegal smokes is big business from there to here. Yours truly is a customer. Enough said.

It was quite surprising this week to see a photo of a local establishment plastered across the front page ofLe Journal de Montreal, with the headline, "Fumez et gagner!" (Smoke and win!). When I saw it at first, I did a doubletake just to make sure it didn't say "Habs Get Smoked!"

Recently, an establishment on the reserve decided to run a promotion of sorts, tying some tickets to Canadiens games as one of three prizes for those purchasing the contraband tobacco. The deal was simple - buy a $30 of stoggies, and you could win a 2008 Hyundai Accent, cash prizes, or a pair of tickets to a Habs game.

Both ethically and legally.

The Canadiens and Canadian law had something to say about. 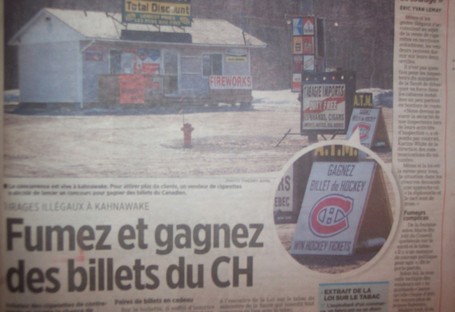 On the hockey end, Canadiens media relationist Donald Beauchamp called it an illegal use of the Montreal team logo for promotional purposes. On the government front, Ministry of Health officials called it a violation of rule 21 of the Tobacco Law, that cites that no merchant can exploit an adverstised product for the purposes of selling the cancer sticks. It's the same law that removed the Players cigarette logo from Formula 1 racecars a decade ago.

There is a lot of local lore tied into cigarette smuggling in Cornwall. You learn to live with the good and the bad. The proliferation of tax free smokes has brought all kinds of publicity onto the city, and not much of it in a positive light. One jokes that goes around in these parts actually has a ring of truth to it. There's an international bridge crossing at Cornwall and Massena, New York, and years ago the country music group Alabama were crossing the border into Canada when they were stopped at customs. The inspection officer borded the tour bus and asked if they had any contraband. The ensemble were stupefied. "We ARE a country band", came the startled response.

Enough reason to arrest them as far as I'm concerned!

Here's a loosely translated exerpt from the Journal story:

"For their centennary, the Canadiens certainly weren't counting on being associated with this type of contest. At the roadside of Route 132, sits a storefront road sign telling customers it can win Canadiens tickets. It's the newest tactic dreamed up by a Kahnawake business looking to expand its clientele.

Last weekend, a representative entered the building on the pretext of wanting to purchase cigarettes. The clerk, standing in front of posters of Komisarek, Koivu, Kovalev and Laraque, informed that a minimum $30 purchase was required to enter the draw.

After some negotiation, the Journal scribe was able to knock the price down to a one - time - only twenty bucks, as a first timer's discount of sorts. He then purchased some Play Fare ciggies.

Entering the draw for a pair of seats to the Canadiens March 31 game against the Blackhawks simply required the scribe to write down his name and phone number on a white scrap of paper.

The journal rep returned a few days later to find that only cash prizes were up for grabs and that the Hyundai was no longer on the table. For nine bucks, he grabbed himself two packs of Marlboro's and the chance to win fifty bucks."

The journal writer, Eric Yvon Lemay goes on to state that on native Mohawk land, such violations of the tobacco act are rampant, and often go without punishment. The non - conformity with tobacco laws are virtually ignored.

Now in light of rival paper La Presse's damning last month of the Kostitsyn brothers tie in's with alleged drug dealers, can this front page Le Journal scoop be seen as their response?

The story is just as laughable, and just as likely to vanish like yesterday's fumes.

Of course, all credible writers of Le Journal de Montreal - Betrand Raymond, Marc de Foy, Pierre Durocher - are locked out by the paper. I'm not sure if Lemay is a scab or not, but I do know that the reserve establishment in question is just a stoner's throw from the Mohawk Casino.

The bigger story might just involve why a Journal writer is there in the first place.

I should investigate, being so close by.

And I'd love to take in that Habs - Hawks game while I'm at it!