Much To Build On For Habs In Loss To Senators

Share All sharing options for: Much To Build On For Habs In Loss To Senators 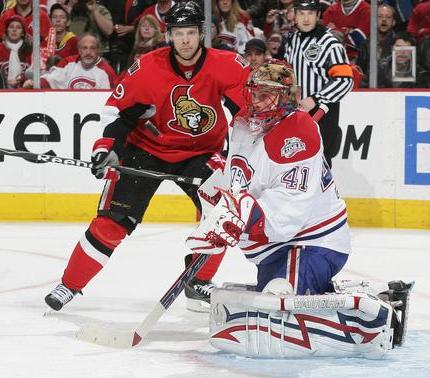 Back in the late 1970's, a punk rocker school pal of mine spat me what he thought was the ultimate insult.

He called me an eternal optimist!

Wearing a Clash t-shirt at the time, Charlie despised that I wore a John Lennon shirt with a peace logo on it. I remember vividly that he said I could presented a bronzed turd and consider it a prize.

He was a Bruins fan, and I was what I am to this day. He's doing time now in Kingston Pen, but I'm guilty as charged - an eternal optimist.

I did in time grow to love the Clash, up until "Cut The Crap".

Charlie argued music as much as hockey, and he came to mind today. I have to wonder what he'd dart me with now, for failing to throw in the towel as far as the 2008-09 Canadiens are concerned.

Watching the Habs lose to Ottawa last night, I suffered a viscious mood swing. I felt my own opinions collide head on in my gut. During a rough day in which conflict ate at me for great lengths, I watched the Habs I was all but ready to give up on earlier, turn some kind of corner.

It's tough to explain, but I saw something beyond the game's final score. 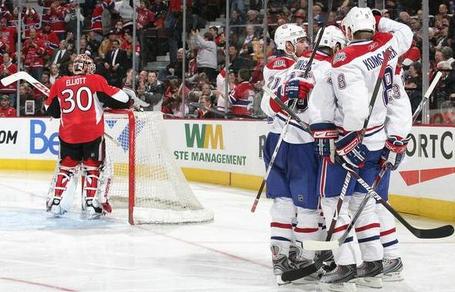 The Habs of late have been a story underlined by chaos, identity, confusion, and cohesion. All their most recent silver linings - few as they've been - have just been grey areas to the colour blind. They have deceived fans with occasional bursts of synchronicity, only to leave us feelings foolish for once again believing.

But something happened on the way to losing to Ottawa last night.

They looked familiar, for a change.

My guess is that it had to do with coach Gainey sticking with his lines for sixty minutes. It might also have to do with the fact that the team never quit, although it had canyon sized absent minded lapses at the worst possible times in this game.

Twice, a tone was set by the Canadiens, and twice it was undone thanks to gratuitous failings courtesy of Carey Price. I've generally laid off giving it to the annointed franchise goalie, due to age and pressure cooker circumstances, but I lost it last night.

Carey owes me a new remote, a new flower pot, and needs to come over to my house and clean the shit stain on my rug left by my cat to get back in my good books.

After the Canadiens opened the first two periods with early goals, their momentum was snuffed out by the largesses of Price, who seems more and more in need of attention deficit disorder stimulants to stay in the game.

Ask my cat. My patience is paper thin. 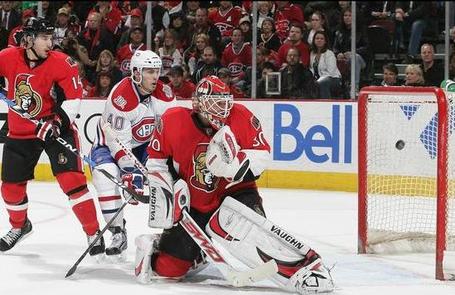 Once Price was relieved by Jaroslav Halak, the Canadiens got a hold of themselves and rallied to make it a closer game. They stopped playing on their heels, and charged so hard, there were moments where I felt that winning the game was inevitable.

And this is where they began to look familiar.

There was cohesion between Latendresse and Lapierre, with Kostopoulos diligently doing all kinds of dog work along the boards. Koivu was throwing himself at plays like his life depended on it. Plekanec was starting to ignore Kovalev when he should have, and began finding Kostitsyn at opportune times.

All told, of each forward on the top three lines, good things were seen from everyone not named Kovalev, who was smothered quite efficiently in this one.

The cohesion brought about by the familiar line combos resulted in a 5 on 5 game that Montreal won 4-3.

What did them in, in the end, was the PK and PP just didn't have it working against Ottawa. 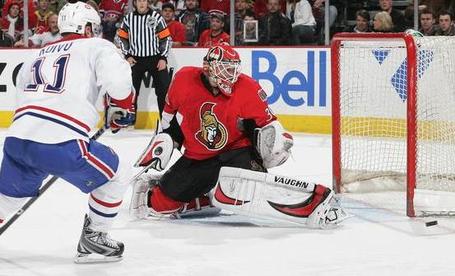 I am convinced, by what I saw, that if the team were to continue rolling these familiar, recognizable to themselves lines, that better things will come. Keep Halak in goal, not until he loses, but until he stinks the joint out, and allow the team to build confidence around him.

If there were ever a lesson to be learned in a loss, this game would represent the one to take such a notion from. What went afoul and got away from the team should not veil what went well.

A foundation has been pourred. It should be allowed to cement and be build upon. Anything else is just digging another hole.

Photos from this game courtesy of the Montreal Canadiens official website.