Niclas Havelid, a solid fit for the Habs D

Share All sharing options for: Niclas Havelid, a solid fit for the Habs D

Atlanta Thrashers defenseman Niclas Havelid is not one of the big names you will hear bandied about as the trade deadline nears. In most parts, he is at best an unknown commodity having played his whole NHL career in hockey hinterlands such as the Georgia state and Anaheim.

Now in his ninth NHL season at 34, Havelid stands 6' 0" and weighs 200 lbs. This season with Atlanta, he has 2 goals and 13 assists. Aside from playing with the Ducks and Thrashers, Havelid was a rock on defense for the gold medal winning Swedish Olympic team in 2006. With Anaheim, Havelid played into the seventh game of the Stanley Cup finals in 2003.

Havelid is neither a flashy player, nor is he a big point producer. His best assets arise from the calm and efficient nature of his game. While he shows little offensive upside, he brings stability to all areas of the game. He is often unnoticeable on the ice due to his habit of making clean work and few glaring mistakes. A disciplined defender, he rarely gets his team in trouble, taking on average 20 minor penalties a season - quite low for a top pairing defender on a supposed weak team.

In some corners, the Swedish native has been termed a poorer man's version of Niklas Lidstrom, in that he is fluid in all facets of the game, without rousing much of a fuss. Efficient and fleet footed in his own end, he is a quick decision maker seldom caught out of position. Not an overtly physical presence, Havelid uses his smarts to avoid getting into trouble. He reads both ends of the rush with veteran composure.

He would seem to be a smooth fit for what the Canadiens currently need, which is a defenseman that can slide into the second and third pairing and bring about a smooth complicity with any type of pairing partner.

According to this site, which has all kinds of good things to say on Havelid, the Red Wings are in hot pursuit, with the Flyers, Sharks and Devils not far behind.

A 2007-08 scouting report on Havelid with the Thrashers had this to say:

"Havelid sees the toughest minutes of any defender drawing the assignment of matching up against the offensive stars of the other teams. The Thrashers score an average of 3.06 goals per game with Havelid on the ice and allow 3.19 against. When Havelid is out of the equation, everything falls apart. Without Havelid, the Thrashers score 1.54 GPG at even strength, but allow a staggering 2.74 against - a goal differential of 1.19."

Playing out of the Southeast Conference, Havelid faces the likes of Vincent Lecavalier, Eric Staal, and Alexander Ovechkin more often than other opponents. In 63 games this season, Atlanta has scored 125 even strength goals, and allowed 141. On a minus 16 team, Havelid is a strudy plus 4, best amongst the team's regular defenseman.

Havelid sees virtually no powerplay time with Atlanta, but he is a mainstay on the penalty kill. Of his two goals this season, one was scored shorthanded.

As the trade deadline approaches, Havelid could be an interseting option for the Canadiens. Almost assured of being traded by Atlanta due to his age and free agency status, he could come at a reasonable price. A veteran presence, Havelid would be surrounded like he never has been on the Canadiens team, and it would surely bring about his best game. Judging by his traits, he's snug fit alongside Josh Gorges, Roman Hamrlik, or Mike Komisarek.

Here are some further stats on Havelid, in comparisdon with where he could fit in with the Canadiens. 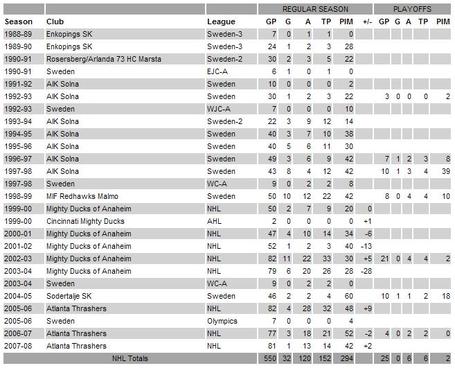