Share All sharing options for: Loss To Rangers Continues To Reveal All Too Familiar Cracks In Canadiens 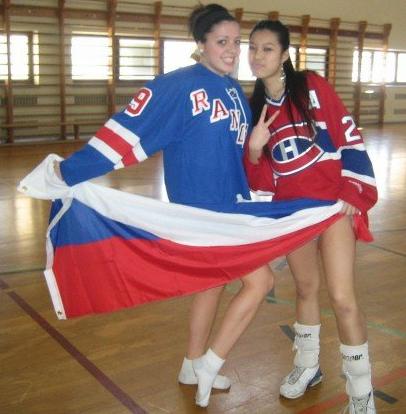 Ability, faith, and confidence. If only they could come together.

Last season, these three elements of the Canadiens character had many opportunities to manifest themselves in unison during what many are now terming a surprise season. As all of these mental and emotional componants have presently vanished, the team is now being viewed as a rudderless vessel, that was never really as sturdy as last season's showing brought many to believe. This season, club's composure comes and goes, drifting like waves.

The verve and swagger that the 2007-08 Canadiens had is long gone, replaced in recent games by recklessness and desperation. The team still has certain solid elements, but as a whole, it is a group rattled by the realization that it is nowhere near as solid as it once thought it was. This club panics easily, and at it's worst, losses its group focus at the most pivotal of times.

In the group of players, there is an abundance of talent we can all testify to having seen more often than once. It misleads. When everything is in place, it fits together like fingers on one hand, creatively finding the path to victory. When elements of the group break down, the team meanders aimlessly, relying on individualism to see it through. 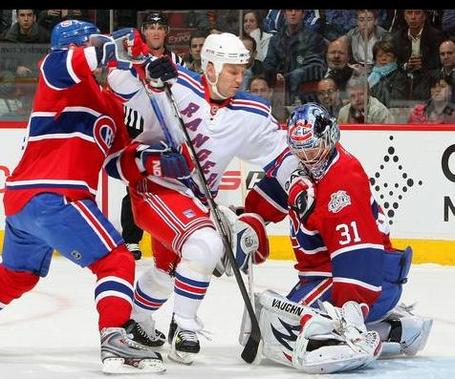 In Bob Gainey's first game behind the bench against the Oilers last week, there was a brief glimpse of what it would take to right this sinking ship. In a first period stretch, you could clearly see all five Canadiens players in the play inside their blueline, like webbed fingers of the hand, clogging passing lanes and eliminating shot options by their single unified presence. The Canadiens were shown a powerpoint presentation on the subject two games later, on Saturday when they were schooled by the New Jersey Devils.

In order for Gainey to bring this team to play such a suffocating style, he has to sell it the same mantra he offered to Alex Kovalev last month during his two game forced sabbatical - work first, and the talent will come.

Maxim Lapierre's effort in the last two games, for one, has been a profound example of this.

The trouble for Gainey, and Carbonneau before him, is that the teaching of work rituals is flying over the heads of players drafted based on their offensive talent moreso than their work ethic. The basic fundamentals and teachings now being stressed during practices have yielded little result thus far because the Canadiens have drafted a group of players designed to evoke firewagon hockey. Asking this bunch to plough and clog is akin to wanting an opera singer to cover White Stripes tunes.

It just doesn't fit, and this attempted makeover of the club's mentality reveals all kinds of cracks. 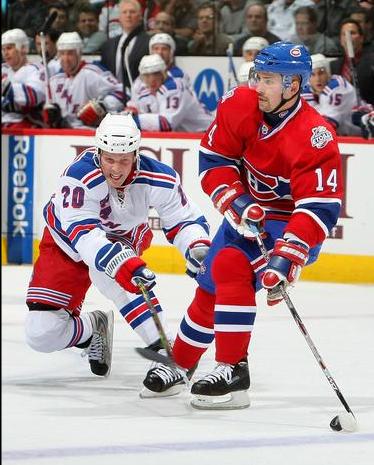 The connundrum in part is that by concentrating on cleaning up inside their own zone, the transition game is being sacrificed rather than fortified. Breakouts that should be three strong are done individually, as players overworked are heading off on lines changes after having spent their shifts defending. Once gaining the offensive zone, the smooth passes that once existed to contain the effort have evaporated, due to the lines being out of kilter and players being with unfamiliar linemates being uncomfortable with commiting to puck pressure.

The Rangers game continued to expose the already well observed open wounds in regards to each unit of five's commitment to team concepts. It is terribly curious that in four games behind the bench, Gainey's adaptations have looked like nothing more than a run through of Carbonneau's prior frustrations. He is now shuffling the deck in search of compatible lines and pairings. Seeing him roll out a line of Lapierre, Kovalev, and Higgins speaks volumes that he has come to the same conclusions as Carbonneau. Gainey is now planning to go with the lines that began the season, minus Lang and Sergei Kostitsyn.

Square one after 70 games is a scary proposition. Silver linings, as in picking out small positives in the Rangers loss, add up to little comfort at this stage in the season. The brief displays of skill, talent and ability aren't providing a foundation on which to build group faith or self confidence.

Perhaps the most disconcerting note is that at the beginning of the season, a date with the Detroit Red Wings was seen as a fair measuring stick for where the Canadiens stood. Tonight, the Habs face a regrouped Ottawa Senators squad, and a win is far from being the sure thing it once was. I'm very much afraid.

Somewhere in the back of my mind, I hear the warbling of Celine Dion's vocal chords, preparing for a version of Seven Nation Army. 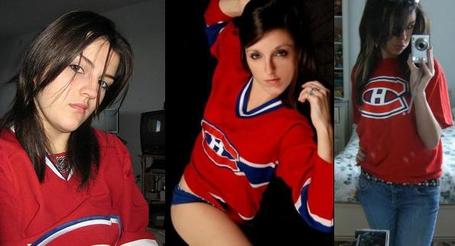 Just a brief note here to readers. Post have been, and may be, just a tad less frequent for the next few days here. Home renovations being what they are, I'll try to keep up on things as best as I can. Yesterday, I was quite pleased - and freaked out - seeing EOTP so high at Ball Hype rankings. Thanks to readers and everyone who makes a habit of reading here and hooks up articles to other sites. It is much appreciated. It's hard to explain that rank. My guess is that the Habs bad news travels at light speed. 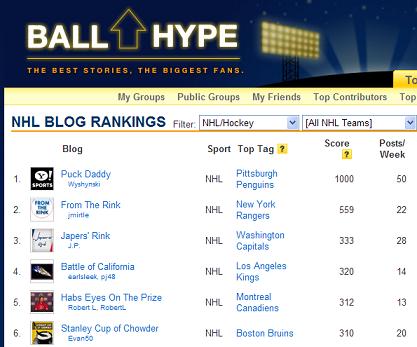