Share All sharing options for: Carbonneau In Good Spirits, Auctions Off All Star Game Lucky Tie 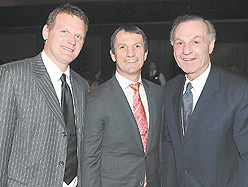 Guy Carbonneau made his first public appearance yesterday evening, at a charity event assisting the Formons une Famille foundation. Relaxed and smiling, the former Canadiens coach was in good spirits, often joking with the crowd, who gave his two rousing ovations during the course of the evening.

During the auction that followed the foundation benefiting meal at the Montreal Casino including 600 guests, Carbonneau removed his tie and offered it to the highest bidder.

"Last time this one was worn, was during the All Star game. As I'm no longer coaching, I won't be needing it", he joked.

Carbo's tie fetched $7,500 for the worthy cause. The Formons Une Famille foundation seeks to place orphaned children with families in the province of Quebec. Carbonneau was photographed here by Le Journal with former team mate from 1993, Vincent Damphousse, and Guy Lafleur.