Share All sharing options for: Seeing Brodeur's Record In A Historical Context 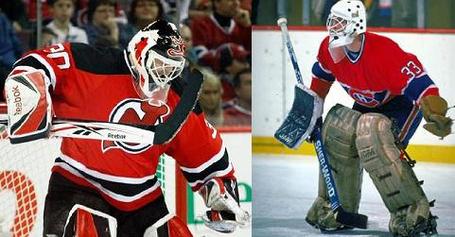 When Martin Brodeur wins his next game - whether it be tonight against Chicago, or the next night in Carolina - there will undoubtably be all kinds of press greeting the record setting moment. Regardless of when it happens, there will continue to be all kinds of debate following the achievement, questioning the merit of Brodeur as the game's greatest puckstopper of all time.

The argument about who is the better or best is often a moot point. Comparing era's, divided by statistics, measured against competition, subtracted from team strength, does not yet have a precise mathematical formula for providing a concise calculation as for determining who the best truly is.

But headlines adore record numbers. Fans will always base opinions on such milestones and records. Along the way, history, becomes just that - history - and context will be lost in the perspectives of most fans.

When Martin Brodeur is crowned as the all time winningest goalie this coming week, he'll be held up, along with his accomplishments, against Patrick Roy as the best goalie of his era, until he obliterates the numbers of his closest competition.

A few years back, Roy became the accepted standard for the measurement of puckstopping greatness, through a series of record numbers, precious hardware, and a jersey number now hung in two separate buildings.

I've nothing against Martin Brodeur and his numerous and great career achievements. The Devils stopper has been the NHL's most consistent goalie going on 16 seasons now. His totals, which speak for themselves, will continue talking for another three or four seasons. The numbers by then will be even more astounding than they appear now. Projecting them over that span, would tend to place Brodeur into a Gretzky - like numerical dominance, perhaps warping all the perspective of all players of his position that came before.

What about when goalies played maskless, with no backup goalie, in slightly shorter seasons, with smaller equipement, against the same opponents 14 times in one season, and in a less watered down era? Those who starred in the game's bygone era had nothing much going for them beyond team strength (which they were arguably more tied to then) than pure athletic ability and guts.

Throw in seasons of totals padded with overtime wins, better equipement, strong defensive schemes and more scientific training and health methods, and the differences in era's aren't simply factors, they are staggering reminders of how much better goalies have it today.

For most of my life, the Canadiens Jacques Plante was the established standard for goaltending. With 6 Stanley Cups and six Vezina trophies, his status seemed untouchable. Add in his numerous revolutionary contributions to the position, and his place as standard bearer is cemented. When Ken Dryden came along in the 1970's and accomplished in 8 seasons what Plante did in a career, no one shrugged. Plante was still tops.

In Patrick Roy's case, it often said that he helped the Canadiens to a pair of Stanley's no one saw coming in 1986 and 1993. Dryden did much the same, in a three year span, helping the Habs confound experts in 1971 and 1973.

It will often be mentioned that Roy was not amongst great teams as Plante and Dryden were, and that they did not have to carry teams on their back as Roy twice did. Goaltenders on the other hand, will forever state than it is much harder to remain focused in games where the majority of play is at the opposite end. It begs a valid question, are goalies considered more dominant, the weaker the team they played on? 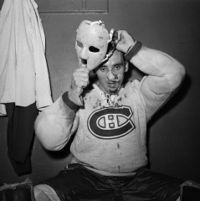 Maybe if Terry Sawchuk or Glenn Hall - "Mr Goalie" - had instead played on teams as dominant as the Montreal Canadiens were during the 1950's and 1960's, the argument would be closed in a hurry. For my money, both Sawchuk and Hall were as good as Plante, but perhaps less fortunate.

More recently, what would Dominik Hasek's career numbers looked like had he been a Detroit Red Wing at the beginning of his career instead of at the end?

How about Ed Belfour and Curtis Joseph, two other goalies in the top five in all time wins? The playoffs have apparently decided they don't factor into the argument.

How about if Bill Durnan joined the Canadiens sooner, or if Ken Dryden had not retired so soon? Would their dominance during a short span have translated into longer term success, making claims for them moot? 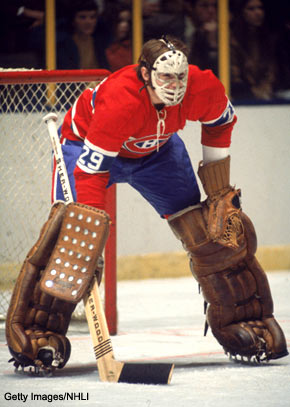 What if the Leafs' Turk Broda best days in goal weren't compromised by World War II?

Perhaps if the Canadiens has not traded Jacques Plante to the Rangers in 1962, and he'd hung around long enough to be part of the Habs next four Cups, the case would be closed entirely.

There is much to consider, before even starting the debate between Brodeur and Roy.

If you can swipe away all such considerations - because they are not modern day - then you really aren't interested in truly weighing the question of who the best goalie of all time is.

The truth is, one can never claim any individual achievement in mere numbers to qualify as the greatest ever. In a team sport, the question of quality of opponant and era will always render any qualification or proclamation less meaningful. Some can spend days fiddling with league scoring averages versus save percentages, but until there is a stat that can return in time and pronounce on shot velocity, who really gives a damn! For me, it will always come down to Stanley Cups.

None of this, of course, stops the logical process of conclusion that Martin Brodeur is almost assuredly the winningest goalie of his era.

Just don't forget that pucks were being stopped by thinly veiled, bare faced braves long before 1994 and that nothing - not even regular season wins - has shrunk their accomplishments thus far. You'd be cheating Brodeur, and your own intelligence, if you did so.

Six Stanley Cups in an eight season span! Plante and Dryden. The puckstopping lawyer in the pretzel faced mask versus the toque knitting eccentric that perfected it.