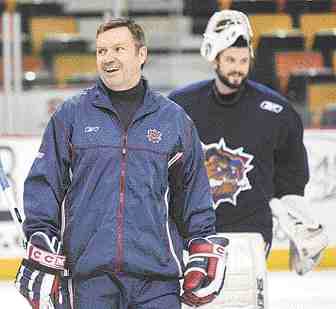 Here's a translation of a Renaud Lavoie article from RDS earlier this week. When Bowman speaks, it's noteworthy. More links on Lever follow this piece.

Scotty Bowman has had a major impact on the lives of several people in the NHL over the course of time. Whether it be players, coaches, agents, or managers, he's helped change a few lives along the way. The name of coach Don Lever can be added to the interminable list.

The two men first met when Bowman was running the Buffalo Sabres organization and prior to the 1985-86 season, Lever accepted Bowman's invitation to join his coaching staff. Lever, who had made his NHL debut with the Vancouver Canucks in 1972, was at the end of his playing career. Bowman's offer was a simple one: play two more seasons with the possibility of being sent to the Sabres' Rochester Americans affiliate, and upon his retirement, Lever would be named the Sabres assistant coach.

Twenty four years later, the two still see each other quite freqently as residents of the same Buffalo neighborhood, and spend much time together in the off season.

In speaking with Bowman, who makes his winter home in Sarasota, Florida, a word keep creeping repeatedly into the conversation, one that Bob Gainey demands of his all his employees: consistency. Bowman's first words on Lever contained the term.

"Don Lever is very consistent. He always the same after a win or a loss. He's a very honest person, and his players like him." 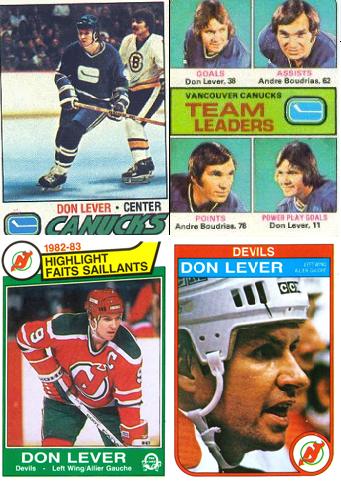 It's not a bad thing to have someone of Bowman's stripe speak for you. It was he who recommended Lever to gainey four seasons ago, for the head coaching position in Hamilton.

"Don was looking for work and I told Bob that he was the kind of coach he was looking for. He has a lot of experience and he's very honest. You know, he has 37 years experience at the professional level. Everywhere he's worked, he has done good. Joel Quenneville had him for his assistant in St. Louis (2002-04) and he's always said that Don did a lot of good work with him. It's true that he has been an assistant for a long time, but as you know, they prepare the practices and drills. He's far from being a rookie. His success in Hamilton has been very important, because he won with a young team filled with players who are now in Montreal. He has a god record and the confidence that goes with it. He's a guy who will do everything he can do to have success and remain in the NHL. He's a family man who is very passionate about hockey." 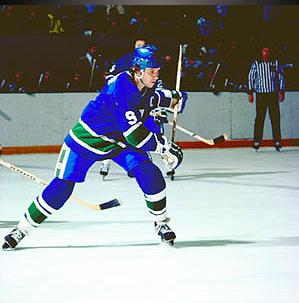 If Lever has one knock against him, it's that he doesn't speak french. In Quebec, a large majority of people have the view that the Canadiens coach ought to speak the language of the people. It's only normal, but for Bowman, times have changed in the hockey world, and he thinks that the Canadiens are best proceeding in ways that do not place barriers on the organization.

"Players these days, come from just about everywhere. It should be the same for the coaches. My former assistant in Detroit, Barry Smith, have been in Russia for three seasons now. He has a good team in a league and it's not easy. He understands some of the language, and his assistants help him with the media. In Lever's case, he'd be able to learn french fairly quickly, because I'm convinced he already knows a lot of the language. (Lever grew up in a french sector of Timmins, Ontario. He has been surrounded the language all his life - Robert L) But as you know, the most importnant thing is that he has an incredible eye for things. He knows who has talent and who doesn't. And I'll say it again, he's very consistent."

That consistency, is often what differenciates winners and losers. In Bob Gainey's case, it has always been a strong point. According to Bowman, Lever has the same trait. So it can said, the Canadiens coach for next season will definitely be consistent. Whether it be Gainey or Lever.

Lever, quoted in la Presse, as saying he will learn french if need be.

"I'm from Timmins, in Northern Ontario, a town with a sizable francophone population. I've never taken french courses and I've never conversed in french, but if you speak slowly enough to me, I can grasp what is being said. I've surprised a few players in Hamilton, who were speaking french thinking I didn't understand. They found out the hard way."


One way around the language problem for Lever :) 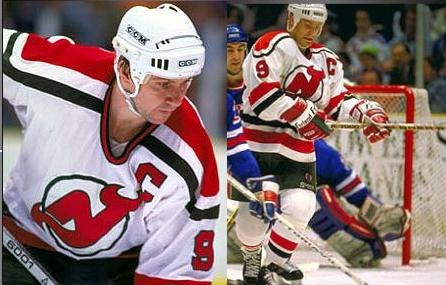 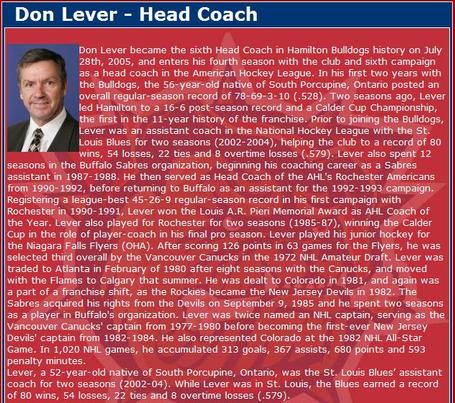 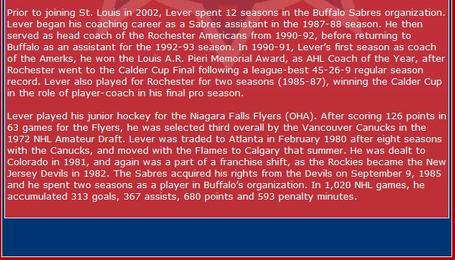