Ten Things Martin Brodeur Will Never Have Over Patrick Roy

Martin Brodeur has had an illustrious career that's been marked by great team based accomplishments, but he cannot be compared to Patrick Roy.

Share All sharing options for: Ten Things Martin Brodeur Will Never Have Over Patrick Roy

New Jersey Devils goaltender Martin Brodeur is about to equal, and of course surpass, Patrick Roy's mark for regular season wins by a goaltender. Should Brodeur win his next game - hardly coincidental that it's against the Habs this coming Saturday - he will tie Roy in one of the buildings where his jersey number hangs in honour.

In time, Brodeur may eventually own just about every goaltending record of merit there is to own, save for Glenn Hall's 502 consecutive games played and Johnny Bower's "Honky The Christmas Goose", but in the esteem of many knowledgable hockey fans, Martin can barely tie Roy's skates when it comes to achievements that matter beyond regular season wins. 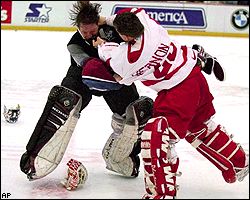 Here is both a fact-based and lighterhearted look at the merits of two of hockey's most prolific stoppers.

Roy has won one more Stanley Cup than Brodeur, and leads 3-0 in Conn Smythe Trophy wins.

By the time Brodeur won his first Cup in 1995, Roy had already won two. Roy's initial achievements came in an era when goaltenders did not dress like upright picnic tables, pumped full of padded, inflated equipment.

After his second Montreal Cup, Roy's nickname went from Casseau to Saint Patrick. Brodeur has no nickname, but plays for Satan's team.

Roy once won a Cup on a team that featured Patrice Brisebois on defense. Brodeur plays behind the trap.

Brodeur's won a bunch of games in the era when ties no longer existed. Roy might have sucked in shootouts, but all his wins were earned in a less watered-down era. 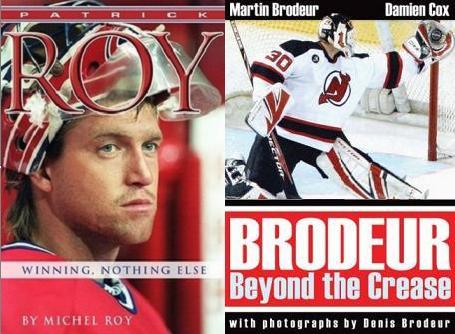 Roy's book was written by his father, a boring tome with a great title called Winning, Nothing Else. It was an end of career encapsulation. Brodeur's father Denis used to be a photographer for the Canadiens, whose one book features only photos. Brodeur's own book was co-authored by Damien Cox, who is best known for covering the Toronto Maple Leafs, and was called Beyond The Crease. Brodeur's book has come years before his days are over, and was basically written around a plea to lessen restrictions on goalie equipment sizedowns.

Roy has locked horns with Mike Vernon in a bloody fight, was suspended by the NHL for cracking Warren Babe in the shins, won a power struggle with Mario Tremblay, has taken on the entirety of the QMJHL several times, and slayed Jeremy Roenick in a verbal joust. Brodeur has scored two empty net goals. 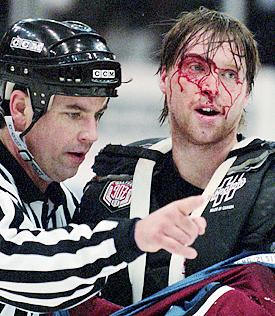 8) Off-ice Shenanigans of the Marital Kind

Roy somehow managed to remain married his entire career, before becoming divorced. His marital melting point came after a family gathering at his home in Colorado, wherein he lost his head and ripped a door off its hinges. 911 was called, but Roy escaped the law. Brodeur banged his sister in law, and got caught. 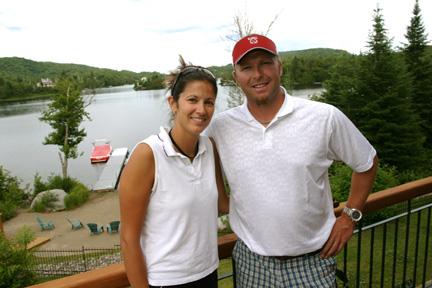 Roy had his appendix removed during the 1994 playoffs. He missed a game and returned three nights later, stopping over 50 shots in an overtime win. Brodeur pulled a muscle in his bicep in 2008-09, missing 50 games.

Roy plied his trade in the province and state that respectively gave the world Celine Dion and John Denver. Brodeur played his entire career in Bruce Springsteen's backyard. Hey, you can't win 'em all!

Brodeur and Roy are similar in some ways, and opposite in others. Curiously, both enjoy having their photos taken at the Canadiens bench in the company of former Habs.

For a more serious look inside the greatest goalie debate, check out Greatest Hockey Legends' breakdown of numbers. For myself, the best all time stopper is neither a Habs, nor Brodeur. It just might be this man.