Share All sharing options for: Gainey's First Flirts With Disaster 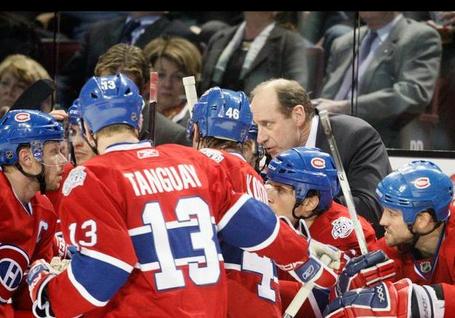 Some games are easier to write about than others. As Bob Gainey's first game back behind the Canadiens bench, this particular contest had a very well defined storyline to it.

Just like everyone watching, that was the point to key on, and I went looking for distinct differences in how the team coached by Gainey would play, as opposed to what we'd gotten used to before. It took a good while to come up with this. I think I saw three hockey games in one last night. Each period seemed to have it's own identity. I might have seen three coaches coaching as well.

In the first period, the troops rolled out pumped, as is often the case when performing for the first time in front of a new coach. The first thing that was noticable, were the quick lines changes to start, as all four trios were rolled out by the first minute and 45 seconds. You could see subtle Gainey adjustments, such as finding all six Habs within the camera's scan on the TV screen, meaning the forwards were coming back to help out the defensemen with more consistency than before. It was easy to see units of five collapsing in the slot, removing all lateral pass options from the Oilers speedy forwards. There was alot to like about that. With passing lanes all clogged up, Edmonton managed just six shots on goal. 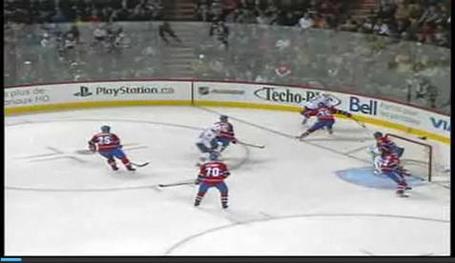 With the concentrated effort in that area, the Canadiens breakouts were of a more unified, three forwards strong variety. There was simplicity of execution in every facet. The Habs weren't hitting much, and they didn't chase after hits and take themselves out of the play very often. After Oilers goalie Roloson's fat rebound landed on Tanguay's stick to give Montreal a 1-0 lead, the Canadiens exercised an even tigher control on the Oilers in their own zone. The concentration on defense came at the sacrifice of offense, and the Canadiens produced few sparks for the remainder of the period.

In the game's opening stages, it looked like Stewart, Hamrlik, and Metropolit had all come to play. Lapierre was being his irritating self near the net after whistles. Kovalev was making a habit of entering the Oilers zone in a less experimental, straight line manner, and twice dumped the puck into the corner when options ran out. In a period defined by control and cohesion, the Canadiens didn't press much offensively, even though they spent a fair slice of time in the Oiler zone. 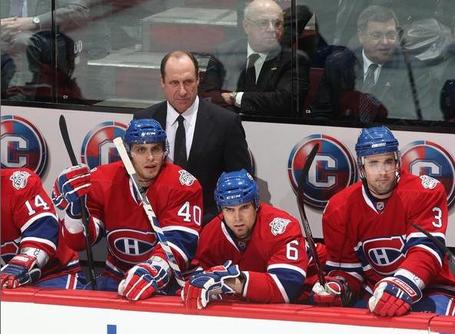 The second period was an utter disaster. The Canadiens were a disorganized mess and were badly outplayed. They spent long stretches in their own end and on too many occasions players extended their shifts way too long. On the few occasions where they entered Oiler territory, they looked for perfect scoring chances rather than trying to create them with shots at the net. Montreal fired all of two shots at Roloson in the period, and it resulted in a goal. Finally coming at the 16 minute mark, a Dandenault rebound was pounced on by newest Hab Metropolit, making the score 2-2. A curious lesson with both goals scored off rebounds, if players don't hit the net with shots, they cannot create scoring chances.

In the post game presser, Gainey was asked if going back behind the bench was like riding a bike, and he replied in the negative, referencing the second period as an example. In admitting that he had no clue what adjustments Edmonton brought on, or what the Canadiens players were doing badly, Gainey owned up to being a step behind. He cited that with the bench at the opposite end for the period, line changes were badly managed, and that he felt all moves were a step behind. He garnered a giggle from the press corps when he mentioned that he couldn't really blame the players as he himself had no idea what was going on. Gainey closed the question by saying that it would be looked at closer in review and ironed out before the next game. 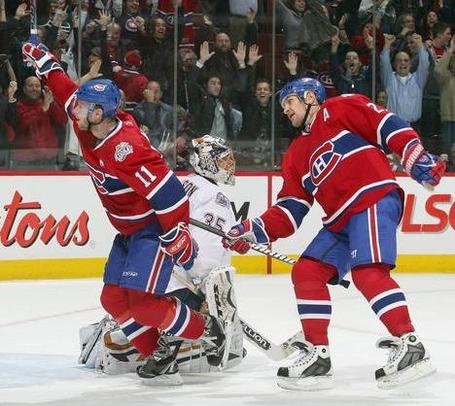 For the third period, newly appointed assistant coach Don Lever came behind the bench from the press box above. Gainey stated that with the move, Lever brought no new adjustments, but only wanted to have a different perspective. The Canadiens players however, began doing things differently than they had in the first two periods.

Most apparent, was an emphasis on puck possession and passing. The Canadiens not only fought harder in desperation for it along the boards, but the additional support of a defenseman and forward in fighting to maintain possession was clearly evident many times along the boards and in the corners. Passes became confident and crisp due to the extra time players created frp themselves. Hits started coming with more frequency, so as to increase the chance of lengthier control. Possession was also evident in open spaces, when entering the Oilers zone where players craddled the puck with less panic. In doing so, it allowed them an extra second to hit the net with shots or crowd the crease area for more opportunities. Such tactics translated into deflected goals by Koivu on both the late third period and overtime occasions.

All told, Gainey's first game back was a hardly neat and tidy affair. It surely had moments of both planned structure and disorganized chaos. It did see new wrinkles slowly being implemented, which is somewhat impressive so far, considering the team has yet to run through a full themed practice at this point. Once Gainey gets an exact handle on issues and puts the team though the paces that correct them, there will be a more pronounced concentration on the details that need fixing most. 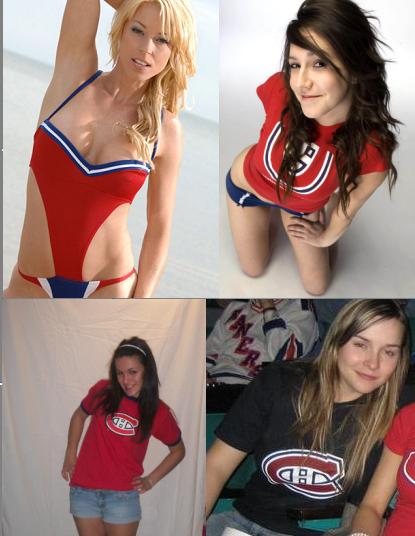 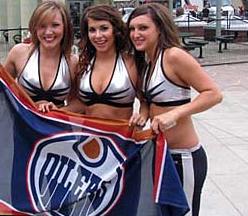