Who'll Be The Next Coach Tossed Into The Habs Roulette

Share All sharing options for: Who'll Be The Next Coach Tossed Into The Habs Roulette 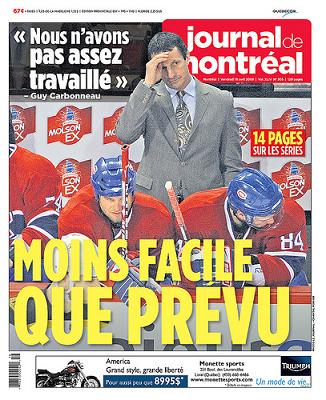 Maybe you are like me - pinching yourself thinking that yesterday's news is all a bad nightmare.

Or maybe you are like any member of the Montreal Canadiens brass, feeling that the centennial season has turned into one.

I will always like Guy Carbonneau, as a former on ice warrior for the Habs, and as a coach.

As warriors go, was there ever a better foot soldier than Gainey? I trust his judgement and instinct in this decision, but I don't have to like it.

I think the 100 seasons celebrations placed unnecessary expectation on the club. Perhaps they were unrealistic as well. I'm not a big fan of blowing up the blueprint or changing horses in mid stream. I also hate resorting to using cliches.

Back the Habs go onto the coaching roulette, with the GM as interim bench boss.

Where my confusion and conflict lies, is when Gainey states yesterday that younger players brought up from Hamilton sometimes regress after intial successes. He even noted that the club expects it to happen in certain cases almost plans on it.

An analogy in all this, would involve a steep hill and a mountain bike. You gather steam peddling like mad, and make it halfway up. The steepness of the curve at some point stops you in your tracks. You roll back a bit, and return to a place from which you can build more steam for the climb. You try it again, and make it a little further past where you once were stranded. You look around, find another place from which to push a little further. You do this repeatedly. Sometimes the bike gets a flat tire and you make the rest of the way by foot, other times there's enough strength left in your legs to peddle those final hard lengths. You reach the end of your might and you can see the summit in sight, and it energizes you for one final thrust. You keep at it and reach the top of the mountain - reaching it because you never gave up.

You could say this mountain bike didn't blow a tire. It might have sprung a slow leak, and threatened to go flat. Yesterday, the air was let out of it, and it had to be replaced by a whole new wheel. Time will tell if the bike was repaired halfway up the mountain or not. Time will tell if new replacement parts are needed. Someone else might take a look at it and say all it needed was a squirt of oil and a dab of grease.

Is grooming a hockey club, or a coach, any different? In expecting rookies and sophomores to make backsteps, does this not apply to coaches as well, and team's in general?

The answer will likely go unheard, as to how many second chances Gainey gave Carbonneau.

I thought he was in it for the long haul, to become a better coach with each passing season, learning from its inherant trials.

Now Gainey hops on the bike at the bottom of the mountain, patchkit in hand, and ready to run it up as quickly as this limited time in building speed allows him. Wherever the wheels stop turning, will be the starting point where the next rider takes over from.

The climb will begin at the bottom with no idea where the oil and grease are needed, no clue where the rough spots lie, and few notions as to which area to avoid steering into. When air starts to leak out, it will be realized that the pump has been left behind at the base.

And we will be privelege to watch it all happen all over again. 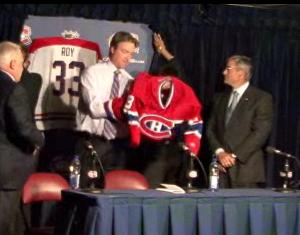 When coaches are on the hot seat in Montreal, names start popping up left and right as to who would make a good successor.

Two such names already on people lips are former Colorado coach Bob Hartley ( coached the Cornwall Aces here in town and I do not not not like him!) and inevitably, Patrick Roy.

Gainey will be bringing Hamilton's Don Lever, knows as very good teacher, to assist him in Montreal.

Is he being groomed for the Canadiens job? It would be risky for Gainey to state as much, as a conspiracy against the english named Lever would immediately be launched against him.

Unlike when Gainey took over in 2006 and brought in Carbonneau to replace Julien, there is no heir apparent to the job at present. The speculation will be rampant. Let the polling start now!