Something Smells Rotten Inside The Carbonneau Firing

Share All sharing options for: Something Smells Rotten Inside The Carbonneau Firing 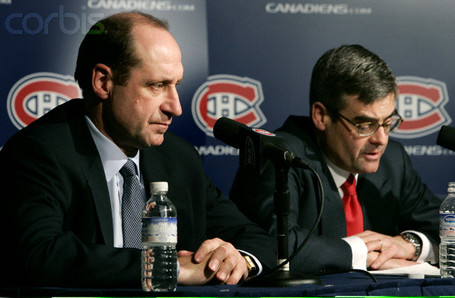 Robert L note: Many different opinions will be elicited from the firing of coach Guy Carbonneau. Well liked in some quarters, and not so much from others, opinions on this move should split right down the middle. I've long backed Carbonneau here, and despite his mountings errs, stood by him in a sense, as a coach being groomed for the long haul. Yesterday's news caught me like a suckerpunch, and I've had a knot in my gut all evening long. It would be quite hypocrital of me to put a knife into a man I've often defended so there will be no "it's about time" or "it's all Gainey's fault" rants here.

Along with initial thoughts on this move being very uncharacterictic of Gainey, came a notion that the firing may have been ordered from the GM's superiors. Regular EOTP reader and commenter Saskhab made note of it in yesterday's comments and I thought he was onto something. In mentioning that he would be writing his take on things, I invited him to share his thoughts here, with his own post. I'm happy that he accepting the invitation.

What you will read below, are Saskhab's words unedited from an e-mail sent here late last night. He brings up several interesting points in his piece. I hope you enjoy it.

There are two ways to look at the firing of Guy Carbonneau as the Head Coach of the Montreal Canadiens, and General Manager Bob Gainey appointing himself as the interim Head Coach.

The first is the hockey reasons. Since the All-Star break, the team has been struggling to win games. The bottom line for any coach’s performance is wins and losses… but then again, the Habs were 5-2 in their last seven games, and seemed to make an emotional turnaround with a big "all for one" style win on the road in Dallas just Sunday night, including a massive series of penalty kills at the end of the first period and into the beginning of the second.

My evaluation of Carbonneau’s faults lies in a couple of areas. One was the mishandling of minutes to certain key players. The team’s leading scorer, Andrei Kostitsyn, was frequently handed fewer minutes than checking forward Tom Kostopolous in recent weeks. Added to that, Carbonneau seemed reluctant to acknowledge that Andrei Kostitsyn was less effective opposite Alex Kovalev than he was on a different line, preferably playing the right side. Another gripe I had in the Canadiens’ style of play was their willingness to concede their own blue line defensively, often letting the opponent gain entry with the puck and with some speed. These were faults that I definitely laid in team play and ice management, though in general, I viewed Carbonneau as an effective head coach who was improving in time. It can’t be stressed enough that this job was handed to Carbonneau after only a couple of brief stints as an assistant coach and assistant general manager, a long and successful career as a player, but no previous head coaching experience. Carbonneau was viewed in my eyes as much as a protégé, and project, as Carey Price was. I have no doubt he will find future success in coaching and be better for his work in Montreal the past three seasons. 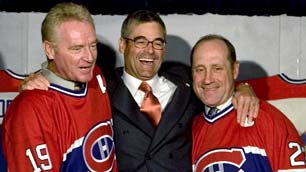 So what happened? Is this the case of giving up on a star prospect too soon? Is it simply about the players giving up on him for his errors? Was there a difference in team philosophy?

It’s often said that a manager can’t fire his players, so he fires his coach instead. The problem is, with so little time remaining in the season, Bob Gainey had the rare opportunity to do just that. With only 11 regulars signed through next year, the fact is that Gainey could have gotten rid of a lot of the players he felt were a problem quite easily, including the team’s 4 highest paid (and most experienced) forwards. If Gainey really believed that Carbonneau was a great coach, and that the players were the problem, then he had the opportunity to show the loyalty to the man he handpicked and get the players to "fall in line" as a result. He didn’t.

Firing a coach is something Gainey has only done three times in his career as a general manager. There was Carbonneau; there was Julien in 2006, and Ken Hitchcock in 2002 when he was the General Manager of Dallas. With Julien, he was hired by Gainey’s predecessor, André Savard, and was always viewed as a man on thin ice that Gainey would replace in time. The real only other comparison to Carbonneau’s firing that can be made is Ken Hitchcock. When Gainey fired Ken Hitchcock, he resigned as Dallas’ General Manager immediately, suggesting that he was pressured into the move by team ownership. Which leads to the second possible reason why Carbonneau was canned. 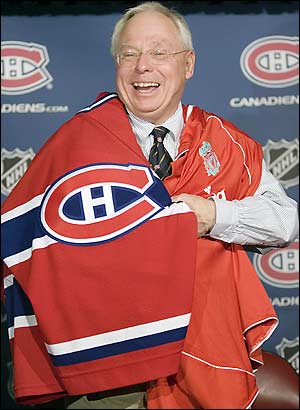 Something smells rotten about this move, as it seems to be very un-Gainey to fire his handpicked choice. At the midpoint of this season, Gainey even called hiring Carbonneau his "best move" as GM since taking over in 2003. Is Gainey under added pressure to make this team successful? The answer seems obvious… yes.

In case you’ve just been awaken from a decades-long coma, this is the Canadiens’ Centennial Season, a year in which the team has celebrated all things bleu, blanc et rouge ad nauseam. A year long schedule has been carefully planned that is designed to at it’s most benign serve as a fun history lesson, but at it’s most severe is a year long money grab to take advantage of one of the world’s most passionate fan bases during an economic collapse.

So who is the architect of the Centennial festivities? Team President Pierre Boivin. Although Boivin is no longer involved directly in hockey operations, as Gainey only reports to team owner George Gillett, Boivin remains a highly influential figure in the Canadiens’ day-to-day operations. He’s been with the Canadiens longer than even Gillett, taking over as Team President in 1999. And before Gainey took over, Boivin was responsible for hiring and firing the team’s General Manager. At the conclusion of the 2002-03 season, he took a lot of flak for holding a season ending interview with a La Soirée du Hockey (the now defunct French language version of HNIC) reporter sitting on a large chair at centre ice, one that resembled a throne. Back in 2007, he openly mused that the team's rebuilding phase had ended, and that Carbonneau and Gainey were now to be judged only by results. For a man supposedly separated from the hockey operations department, he sure sounded like an impatient boss. 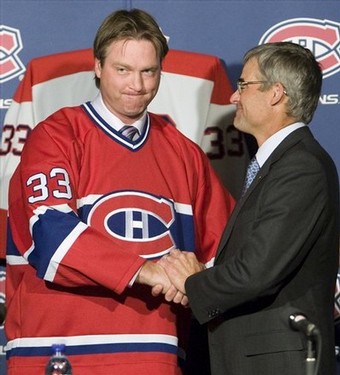 So what does this have to do with Carbonneau being fired? I’ll be very simple here… Gainey may only have to answer to Gillett, but Boivin only has to answer to Gillett as well. Pierre Boivin has helped make Gillett a lot of money, and the Centennial festivities are a cash cow. With the on ice product floundering, Boivin looks pretty good in comparison, and could definitely hold major influence with his boss. If Boivin is panicking, that might make Gillett impatient. Gainey’s not a man of impatience… his team building, his support of Hitchcock to the end in Dallas, his public admiration of his coaches… this move does not seem like it came from Bob Gainey directly.

I might be wrong. I hope so, as nothing could be more troubling for the franchise’s future than middling upper management reminiscent of the later Ronald Corey/Molson days. And certainly there were hockey reasons that have in the past lead to coaches being fired. But given Gainey’s past history, how this all went down just doesn’t add up.

If you missed Gainey's press conference, there's a transcription of the audio here.