Share All sharing options for: Chris Higgins Owns Up, Hands Over $500 Cash 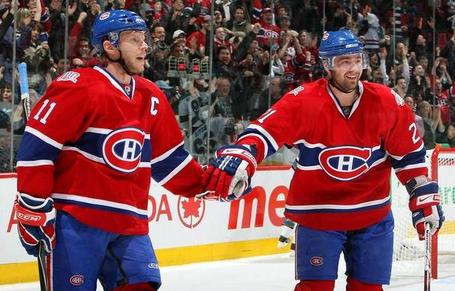 Funny little story in La Presse yesterday involving the kind of thing that goes on all the time within the team club house. Funny because one wouldn't put it past the paper to have titled the little blip, "Canadiens Higgins Admits To Betting On Games."

Imagine the stir that could have caused!

Make a promise, keep a promise. Chris Higgins is keeping his word on the $500 laid on the table to any Canadiens player who would set up a Josh Gorges goal against his former team, the Sharks on Saturday. Forward Matt D' Agostini will pocket the cash, for setting Gorges up for the team's second goal in the first of the game.

"I'm reallly happy for Josh and real glad I didn't make it a thousand dollars", said Higgins. "Matt Doesn't have to worry, he'll get his money. I wrote the offer on the dressing room board and the whole team knows about it. I've no choice, or else I'll really hear about it."

No word yet on whether coach Carbonneau has posted a $100 bill for Georges Laraque's first!