Share All sharing options for: Halak Evokes Roy In Habs Nailbiter Over Sharks 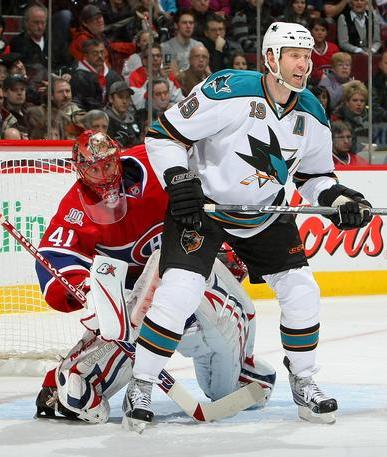 Early yesterday afternoon, my daughter tells me that HABS is an acronym for "have a beautiful Saturday". Hey that works for me!

Since playing the Sharks constitutes a hell of a challenge for the Canadiens, I though I'd go the delayed live game blog route, as I haven't done one in a while. It should be an interesting night.

The Bell Centre greeting for the Canadiens is absolutely nuts when they hit the ice. Is there a more excited rink when the home team is on a three game win streak?

Brian Boucher is starting in goal for San Jose. Huh? Pepe Lemieux's also out there for the opening faceoff. Nice gesture.

First good impression of the game, Kovalev threads his way into the Sharks end with some silky skating and manoevering.

Two shifts in and Brisebois and Komisarek already look nervous. Dandeneault should be dressed.

Are Mike Grier and Jonathan Cheechoo fourth liners in San Jose? Can't be! They are out against Metropolit, Stewart and Laraque, and it looks like a mismatch. Wait.....the Sharks fourth line is Claude Lemieux, Jeremy Roenick and Jody Shelley. I want to laugh, but they are giving the Habs trouble in their own end. 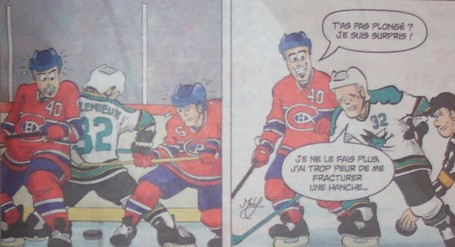 Laraque throws a hit on Dan Boyle and Shelley comes in waving his arms in the air - "Let's go!" Four punches and Laraques destroys him.

Another inspired shift by Kovalev. He's announced himself for the night.

The two Max's come close. They are starting to gel.

Sharks are outplaying the Habs already. Not a good sign. Jaro look alert though. That's a god sign. He just spun 180 degrees in the crease to catch a rebound off the glass.

Strong shift by Higgins. He can't thread a needle lately, but he's a hassle to play against.

Pacioretty hustles behind the net and draws Erhoff into a hooking penalty.

Tic, tac, toe and ....boom. Markov rips one from the point. 1-0 a half minute into the PP. That'll make the Sharks think twice. The Habs PP is their big threat once again. 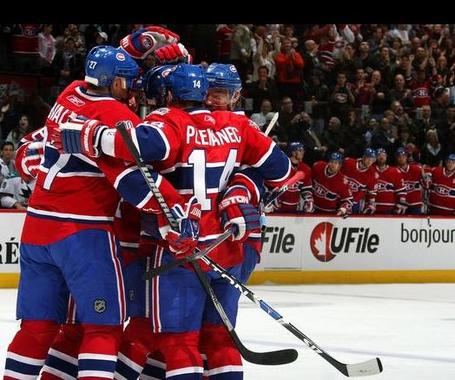 Lemieux gets a scoring chance. His shot looks 43 years old.

Second string shift from D' Agostini. Taking the puck behind the net, he outhustles the Sharks D with Boucher watching him all the way. He sprawls and slides a pass from the shaft of his stick to a pinching Gorges in the high slot. 2-0. Whoa, did Boucher ever overplay that! Glad he's in.

Canadiens are playing with lot of confidence now.

The Kovy line knocks at the door. The two Maxes follow suit.

D' Ags and Higgins are wreaking havoc out there, giving the Sharks D fits. Markov give and go with Koivu finds him wide open. What a pass! 3-0 Habs. Pinching myself here! 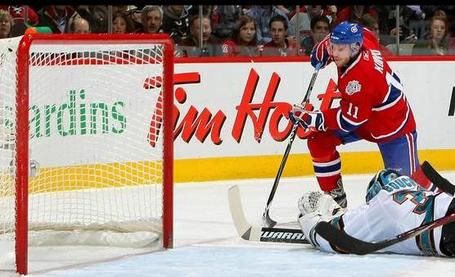 Benoit Brunet's giving all the credit to the Laraque fight for changing the flow and momentum of the game. What a crock! It's the Habs PP, fool. That's what's making the Sharks hesitant out there.

I gotta run out just before the period's end. Drving my acronym creative daughter to public skating at a local arena.

On the way, I catch the end of the period on CKAC. Danny Dube also mentions Laraque's fight as changing the pace. I must be a moron. The powerplay has nothing to do with it!

Komisarek runs interference at the blueline. What in the world was he thinking?

Ouch! 3-1 now. Pavelski slips behind a snoozing Hamrlik into the slot. This changes everything.

In the Sharks end, Plekanec dumps the puck in and is interfered with a foul remiscent of Komisarek's move, but no call.

Halak's looking overwhelmed. A puck off the crossbar, and a bounce later finds Thornton in the slot. 3-2...and yikes! Houde was right.

Laraque gets a shot on goal...hey wow!

Brisebois dumps one down the ice and gets stuck out there. Doug Janik, can you do better?

D' Agostini gets called for a hook after being rubber out in the Sharks end. A bit lame, but I hope the ref calls the whole game this way. Might be the Habs best chance to stay ahead. For now, they gotta kill this one off.

First PK Unit a daring choice....Pleks and Kovy with Markov and Schneider.

Vlasic hits the post! I pity Habs fans with pacemakers.

A tired Markov fires blindly around the glass. Take a better look dude....puck stays in.

Metro and Greek Lightning come out, kill off the last second. Phew!

Kovalev's covered real good. Not an inh of room for him, and he's looking discouraged.

AK46 not into this one. No hustle to catch passes just out of reach, no intensity near the boards. Some games he's Mogilny, some games he's Andrei Kovalenko!

Pacioretty working his ass off behind the net. Great consistency game in for a 19 year old.

Last minute of the period and the Habs are burried in their own end. Not good.

Intermission: Dave Morrisette preaching for his lunk head types, also points out the big shift in momentum due to Laraque's fight in that long gone first period. Note, dude, the Sharks got the momentum back after a powerplay goal of their own.

Is the rink tilted towards the Habs end. Seems so. A bad sign.

Marleau and Thornton are all over the Habs D.

15 minutes to go and no shots yet for Habs.

Kovy dangles onto the Sharks end, one hand on the stick and easily snuffed out.

Brisebois lured out of position, pursues Grier all the way to the blueline.

Higgins breaks in one on one. Sharks D all over him like a dirty shirt. No call. 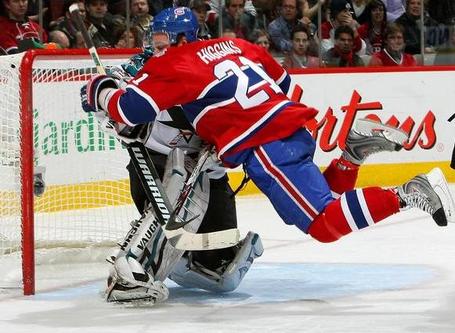 Carbo sends out Metro and Stewart with Kovalev. It can't hurt.

Marleau backhands a shot through his own legs. Halak alertly in places makes it look easy.

Kovalev dazzles on a spinnerama move, but he's all alone.

The two Maxes buzz in the Sharks end, but don't threaten.

Boyle drives a boiler hard into the CH on Halak's chest.

Metro with Higs and Dags get a good 3 on 2 chance.

Four Habs waiting back at the blueline, a good idea considering they're being overwhelmed a good bit.

Plekanec has a "girly" shift.

Five minutes left. Habs are a little more poised and patient that earlier.

Two Maxes are strong, deep in the Sharks end on the forecheck. Kills a good 20 seconds.

Sharks buzzing some more. Halak is standing on his head. He's stealing a game in the great tradition....dare I say it...of Patrick Roy. Fans give him a rousing standing O. Well deserved.

Kostopoulos ices the puck. Could be a good thing, might be a bad thing. A time out is called.

The Ole song again. Don't the fans know it should only be sung when a game is in the bank!

Pavelski breaks out of his own end and his stick slides from his hand in stride. A good break. Sharks start over as seconds dwindle.

Game over. Somewhere in the attic of my house, my heart is still beating.

My daughter was wrong. HABS is an acronym for Halak Awesome, Beats Sharks!

A crazy game won entirely in a seven minute span by the Habs. I'm not too comfortable with this "grab a lead, hang on for dear life" style of game. It's relying on Halak's excellent play a little too much. There is having confidence in the goalie, and then there is outright dependence. Over the course of this win streak, the team's faith in their puckstopper has swung from being none at all, to way too much.

It begs the question: Was it the biggest win of the year or was it the worst thing that could happen?

87 hours until the trade deadline.

Bob, the solution is Niklas Havelid!