From Bad To Worse To Rock Bottom For Habs

Share All sharing options for: From Bad To Worse To Rock Bottom For Habs 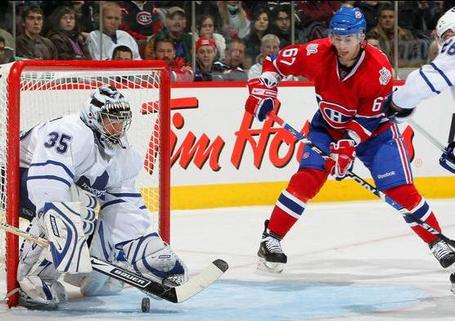 It might be a blessing in disguise for the Canadiens to be heading off for six road games after this stinker.

Losing 5-2 to the Maple Leafs - no powerhouse team, to be honest - is in every way unacceptable.

The trouble with diagnosing the Canadiens problems lately is that it has become a six headed monster. It stretches from the net out and back, and has infected every point in between. Getting through this on to better days will take a great amount of character, soul searching, and players admitting to themselves and team mates what their faults are.

Injuries have obviously taken their toll. After playing well for a certain spell while enduring them, the team now seems too overwhelmed to continue plugging away. But excuses are a loser's verbal diarrhea. It would be like blaming the bad luck the Habs often have. In hockey, players create their own luck.

The injuries are but one fact of the matter.

A bigger and more concerning fact is that the players called up to files holes are the one's giving it their best. If Tanguay, Lang and Latendresse were healthy, it sure wouldn't be Pacioretty and D"Agostini sitting!

There isn't a lack of effort across the board by all players. It comes and goes, dips and sways, as morale swoons. It falls under that cliche of teams working hard, but working badly.

One solution is going right back to simple basics, and trying to win games by 1-0 ot 2-1 scores. It all has to do with positioning, units of five working together, and cautious puck movements. It's a sorry state for such a talented team to be mired in, but this is exactly where they are at. They will have to pass through such lessons without shortcuts.

Panic versus patience will play out over course of the next week. 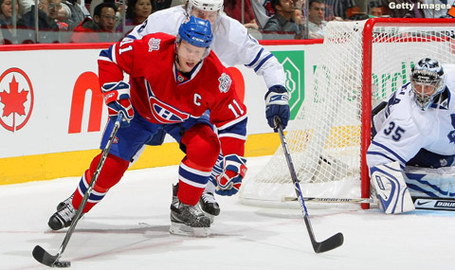 I wasn't all that into the idea of jotting notes down for this game, but it got the better of me just a minute or two in. When it was all said and done last night, I just wanted to scrap the papers it was written on. I tried to keep my notes simple and my eyes on the screen, so each blurb remained brief. Note the change in temperment from period to period.

Price a surprise starter after Halak was announced. Wonder what the story is there?

May and Laraque drop one minute. May gets a half punch in. Laraque makes him look like Alexander Semin.

Louder crowd than usual. Not surprising. Both teams start pumped.

Price seems composed and settled in. He'll have a good one.

Pacioretty - what moves - passes to Cube and he hits the post on a wide open net!

Ole Ole sung in a scoreless tie, five minutes in.

Antropov walks in untouched, right up to Price. Where is everybody?

Two snapped graphytes in one minute. Bring back the wood.

Kovalev should never play on the PK.

What is it with monsters painted onto goalie masks? If I were still playing goal, I'd paint my face on it.

Bouillon's having all kinds of trouble again.

Antropov could be a helluva player if he had heart.

Leaf goal disallowed because of a high stick. Obvious. I think if the NHL wants to increase scoring, everything except throwing it in by hand should count. Imagine that skills that could bedeveloped.

Toronto is badly outplaying and outshooting the Habs.

Price, bumped slightly by May, is beaten by Schenn on a bad angle. Screened? Hard to tell.

Habs hit another post. Their story of the year.

Penalty coming to Leafs in final minute. Habs should have let them touch the puck on the delay.

Max P should be out there on the PP.

Final second, seven tenths of a second on the clock actually, and Toronto is called for delay of game, puck over the glass. The NHl needs to get rid of this. Lucridous call. 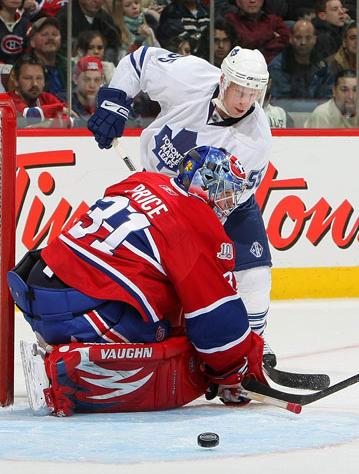 Habs start off with a 5 on 3. D'Agostini doesn't miss on a perfect feed from Markov.

Kovalev getting fancy, turns it over.

SK74 sticks up for Price after he's bumped by Moore. Both go for two. Kinda lame, as little happened here.

The whistle blows as Habs have the puck. No one seems to know why.

Habs kill off their own PP.

Canadiens are showing a lot more life in this period.

Leafs score. Bad coverage by Montreal. Lapierre transition from offense to defense lacks sometimes. He lost his cover here, and the puck ended up behind Price. He could have stopped it.

Good hit by Max P on Van Ryn, who hasn't learned anything from the Kostopoulos slam months back.

A fan behing the Leafs bench is jeering Ron Wilson through a crack in the glass.

Cube smears Grabovski into the boards.

Lapierre's hustle draws an interferrence foul for Mayers. That's the way to do it.

Koivu crosschecks Stajan in the chops. Accidental or not, the refs blew that call. Both players get into it and go for two and ten.

Laraque on the PP now. Let's see how this works?

Higgins get a breakaway on a Markov hail Mary. Toskala stands tall.

Gorges is having a rough shift with Markov. He's not reading his partner's instincts, and Markov isn't making it easy on him.

Max P is dumped into the net. Kunina goes for two - hooking.

Kovalev must be cockeyed. Passes it into the gap between two pointmen from the corner.

The PP is being booed.

So many penalties. A real messed flow to the game.

Habs get another PP, and they are doing better this time out. Feet are actually moving, creating swifter puck movement. That's the idea.

Laraque passes back to O'Byrne, now there's a dynamic combo for you!

This game is getting chippier as it progresses.

Good second period by the Habs. They forced their play on Toronto like they should, and it resulted in much PP time and scoring chances. Now if only they could pop one in. 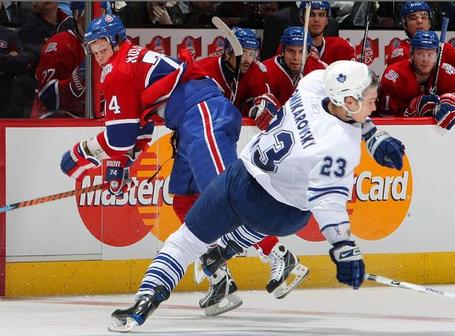 The penalty parade continues. A minor to Stajan.

The PP back to showing to cohesion. Koivu and Kovalev have no click.

Kovalev is slammed into the boards and takes forever and a week to get up. Then he stays out another 20 seconds. Good grief! No one eats up PP seconds like l'Artiste!

Another PP bites the dust.

Leafs go up 3-1. Lapierre coughs it up at the blue line, and a pass hits Blake who rifles it past Price.

If the Habs are down by two, why on God's earth are Begin and Laraque out there one shift after a goal?

Price isn't looking up ice when he whips it around the boards.

Markov shoves Stajan into Price. Real useful that! He's gone for two at a time when he would really be needed on the ice.

Blake is playing like he knows he is being shopped around.

Twelve minutes to go and down by two. Does not look good.

Markov does a hesirant pinch from the blueline a la Breezer and gets caught flatfooted. Leafs break out on an odd man rush and Blake goes upstairs on Price. This one is as good as over.

The Canadiens are totally buggered out there, spooked by their own ineffectiveness. They lift their eyes and head on passes and shot, and they are flubbing everything. This has been the cause of most of the game's turnovers.

4 - 2. Tom the Bomb dives to whack in a loose puck at Toskala's feet. A standout effort in game in which few of his mates stand out.

Komisarek splatters Grabovski at the blue line. Nice, but uneccessary at this point. Positional poise would be wiser.

Kovalev is on the PP point. The puck goes past him and he looks as slow as death chasing down a Leafs player who scoots past him. Him being there is a terrible idea.

AK46 gets a clear chance to shoot and fluffs it. Lifted his eyes again. My Lord!

Kostopoulos has a chance to slam Kubina behind the Leafs net but settles for simply rubbing him out gently. Kubina then plays the puck up ice.

Laraque out again for some reason. He nails Schenn, then Grabovski, and now he's gone for two. Is there a book out there called "How Not To Shoot Yourself In The Foot, For Dummies?" Carbo and Georges should read it.

On the PK, D'Agostini draws a foul from Kubina while chasing him down. A lame call by the ref, really.

AK46 comes in wide for a shot, but an official is standing in his path.

Habs brief PP. Kovalev tries a saucer pass from the corner. Alex, FFS, you are playing hockey, not soccer.

It's over. Mercy. The Habs are leaving the ice to well earned boos.