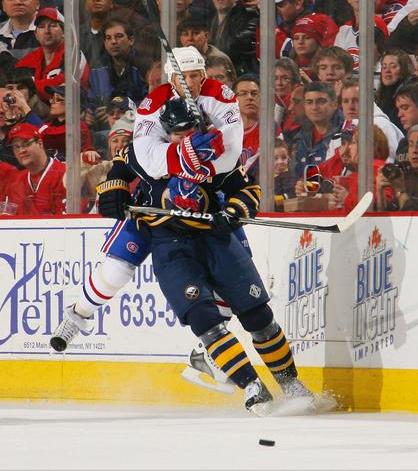 This was a very disheartening effort by the Canadiens. I was out and had to punch the record button to catch this one, and when it was all over I had to wonder why I bothered. At this very late hour, and in a sour mood, all I can muster are some random, glass half empty thoughts.

After three consecutive solid efforts against the Kings, Bruins, and Penguins, the Habs laid a crapper. That old saying - "Your best players have to be your best players" - has gone to the dogs. The best players lately have been named Roman, Max, Max and Saku.

Carey Price needs a goalie to challenge, push, and share experience with him in Montreal. Halak will never be that guy. Price needs a veteran influence around. He dozed through this one and all three pucks that beat him were entire stoppable shots, although his defense left him to burn on two of those.

Francis Bouillon has been admiring Patrice Brisebois too long. He's starting too emulate his softness at the worst posible times in the game. Bouillon will hit hard, relent in pinning efforts, and watch players skate off with the puck. I counted no less than four examples of this. I can see him sitting some out when Breezer or Dandeneault is healthy enough to play.

Mike Komisarek must have his contract on his mind because he wasn't thinking hockey in this one. He made two glaring mistakes and both live will eternally on the scoreboard. Komisarek has to think simplicity out there, because for all the things he does well, there is a bunch that are better left to others. His will is never lacking, but he's throwing off his valuable positionl poise in trying to do too much out there.

I barely noticed Ryan O'Byrne and that is a good thing. Partner Hamrlik was much more noticable.

Andrei Markov was invisible and didn't affect the game at all.

Josh Gorges misses Roman Hamrlik when they are separated.

A very so - so game from Kovalev. He gave an effort at times, but seemed to have mailed this one in. He didn't do much to anger me or lift me from the couch. His two late game penalties were bad calls that I thought were totally inconsequencial. He has a reputation for stick fouls, and little margin to work with in the offical's eyes. 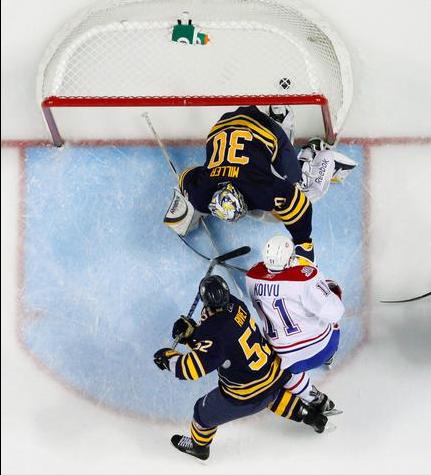 Saku was being Saku, which is creating opportunity where there is none. Missed a couple of good chances.

Sergei had some strong moments, and I think if he was left with Lapierre long enough this line along with Pacioretty would gel something beautiful. Lapierre has played better games of late, but this was still a solid effort.

Pacioretty will never play another game in Hamilton. He's a much better 19 year old than Latendresse was, and is completely unpredictable in many good ways out there. He surprises me every game, and I am having a tough time believing that he has arrived as an NHL'er so soon. But he has.

The line of Begin, Laraque, and Kostopoulos is in every sense a fourth line. They were barely a factor, and I'm finding that all the good things I love about Begin disappear when he has a centreman's responsabilities.

Andrei Kostitsyn has to be more involved without the puck in order to have it more. No one will ever call him Andrei Konsistent!

Plekanec worked awful hard to get his linemates going. He probably dispensed double the body fluid of his linemates combined. Some nights he really deserves more involved linemates.

Chris Higgins has many games like this one in which he works like a dog and accomplishes nothing on a scoresheet. Other games he'll work less and score a pair of goals. 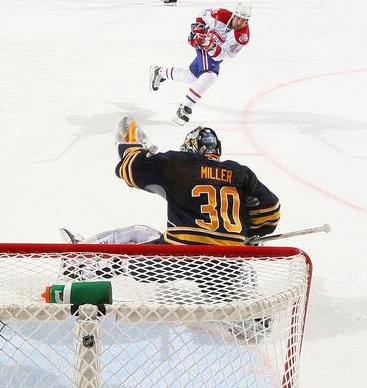 No one can take a shot in the face like Matt D'Agostini. I was impressed. He'll be hard to send back to Hamilton as well. His goal production has dropped from his first games in the uniform, and he is working increasingly hard on the little details that make a player complete.

The game line states that the Canadiens had 37 shots on goal against Buffalo. The ratio of scoring chances to shots would be very low for last night's game. Too much perimeter work. Credit Buffalo's D if you will, but the faster Habs should be steamrolling them something bad. Conviction was obviously absent, and nowhere did it show more than here.

Another out of whack stat - the Canadiens threw only 16 hits against Buffalo. That must be a season low. None for Komisarek, if you can believe that! Zeroes in this category for Bouillon, Koivu, Kovalev, Markov, Lapierre and Sergei. Three for Begin, and two's for Kostopoulos, Laraque and Pacioretty. 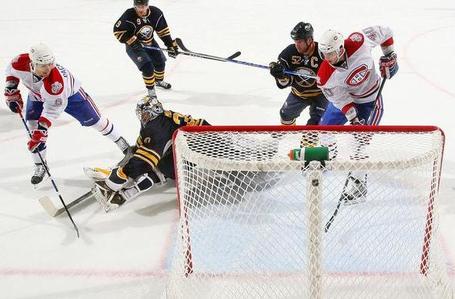 Habs with more than three shots credited to them were Markov (6), Higgins (5), Lapierre (4), and Plekanec, Komisarek and Hamrlik with 3 each. Kovalev, D'Agostini and Begin came up empty.

Tomas Vanek and Derek Roy had no shots on goal for the Sabres.

In the "go figure" department, Laraque understandably had 8:34 of playing time. Next least was Paciretty at 9:42.

Higgins, Kovalev and Koivu all played near 18 minutes.

All told, an effort such as this might be a recipe for embarrassment against Toronto. Let us pray!

You can see the rest of the event summary here at Canadiens.com.