Kovalev, Higgins, And The "C" and "A'' Controversies

Share All sharing options for: Kovalev, Higgins, And The "C" and "A'' Controversies 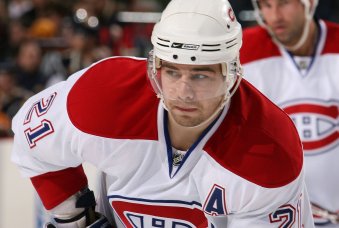 A letter on a jersey is often a great source of pride for a hockey player. In Montreal, where the game's proportions are magnified beyond common sense at times, the awarding of the "A" and "C" on sweaters takes on a life of it's own when subject to speculation.

Recently, there have been two teapots tempests over such a thing in the Canadiens hierarchy, one dealing with the "A" that went missing on Chris Higgins' jersey, and the other, deeper rooted controversy involving the play of Alex Kovalev when borrowing captain Koivu's letter.

The Kovalev "C" theory, goes that he plays better when wearing it, but seems increasing unhappy and unproductive once it is removed. It is a bigger story than it really is apparently.

Contained here are two reports that dismiss the tale as nonsense, but the most telling might have been the proof offered up by RDS during Tuesday's broadcast of the Canadiens / Penguins game.

As it was told, the story reached Kovalev via inquisitive friends of his, and apparently caused him much distress. The player in question couldn't understand the origin of the controversy, it seems.

I am not 100% certain that I caught what RDS said next in exact detail - kids in the house equalling distraction - but I thought they mentioned that Kovalev himself decided to investigate such claims. Either way, the station posted a chart listed Kovalev's points per game average when wearing the "C" versus games in which he didn't over the last two seasons.

Much to the dismay of those behind this fabrication, Kovalev's point production decreases slightly when temporarily handed the captaincy. His PPG ratio when donning the "C" was 0.79 points per game, and 0.84 without it.

Pretty much unchanged, for all intents and purposes. Take a needle to that hot air balloon!

As for the removal of the "A" from Higgins' duds, the player concerned and the coach who made the call have yet to be heard from.

What it seems to boil down to, is that the "A" is probably a more comfortable fit on Komisarek's chest, for the team's sake, and for all concerned. 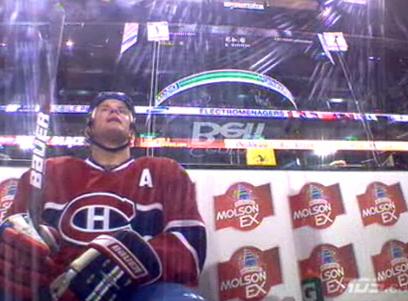 I'll read between here and suggest from past inferences, that perhaps the letter was a burden to Higgins in ways that it isn't to Komisarek.

In pieces translated and quoted below, the captain and Komisarek weigh in on what the letter does and does not represent. Both will point out, with much truth, that leadership and what it entails, does not begin or end with a letter place over the "CH".

Higgins himself, was unavailable for comment yesterday, as he was away from the practice rink for a scheduled therapy day realted to the injury that had kept him out of the lineup.

Here is an RDS article, transcribed from Renaud Lavoie's commentary and interviews: 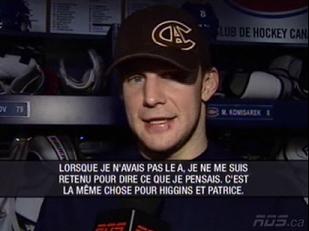 Christopher Higgins may as well forget his title as assistant captain on the Canadiens. Coach Guy Carbonneau has decided not to remove the "A" that is presently stitched on the jersey of Mike Komisarek.

It has been five games since Higgins returned from the injury list, and the sweater he wears is no longer the same as the one he wore before he injured his left shoulder. Carbonneau met with Higgins recently to confirm that the "A" would be remaining on Komisarek for the balance of the season. The decision might seem a trifle insignificant, but it testifies to the respect now commanded by Komisarek.

"For me, when I didn't have an "A", it was never about having a letter on my jersey or not, and I think it's true for a guy like Higs or Breezer", said Komisarek. "I always told Breezer, he doesn't have an "A" on his jersey or a "C", but he's a leader, he's someone and he's a guy that's looked up to in this locker room. He's a guy that's won a Stanley Cup, and has been there and guys look up to. So does that make him not a leader that he doesn't have an "A". I think the same is true for Higs." 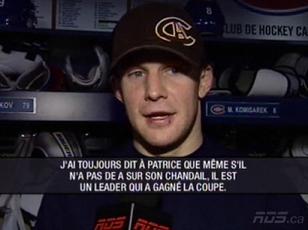 "Now for Chris, he's doing the same thing as before", says captain Saku Koivu. "and during the game, during the practice, you don't think about whether you have a letter on your jersey, you still have to be yourself and do those things. Regardless if you have a letter, the most important thing that you can get is the appreciation of your team mates and the respect that you're looking for."

Speaking of letters, Koivu says he was amused by the minicontroversy in the last few days regarding the perception by some that Alex Kovalev seemed to play better when wearing the "C" on his sweater. The speculation says Koivu, is no surprise considering the media market. 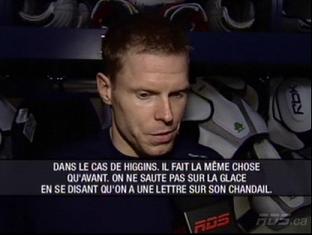 "I think it's something that happens often", says Koivu. "There's lots of media members and hockey is so big in Montreal, so obviously we know that there is a lot of talk and debate on different stuff. But for us as a team and as a member of the Canadiens, really what matters is what goes around in the room here, and we know how it is. I spoke with Kovy and I know it's not an issue." 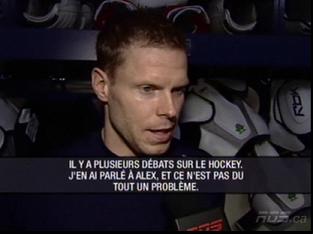 Either way, there is a certain pride for an athlete in wearing a letter on his jersey. RDS wanted to speak to Higgins, but he was unfortunately not available to the media on Thurday.

I transcribed the players quotes word for word from a video clip posted in Thursday's archives that you can link to here.

Denis Poissant of Le Journal de Montreal had this to offer on the Kovalev and the "C" misunderstanding.

Yesterday after practice, Alex Kovalev closed the cover on the whole episode on the captain's "C" on his jersey.

"That's the most ridiculous thing I have heard on the part of journalists this season", said Kovalev, in mock laughter. He did admit to being frustrated by the situation.

The Canadiens number 27 admits that his play hasn't been up to par. According to Kovalev, it was a "desire to try to do too much" and a lack synchronicity with linemates that led to the poor performances.

In the seemingly unending series of episodes in this ongoing Bell Centre melodrama of the past few seasons, coach carbonneau met with his talented, but sometimes underperforming ring winger.

"It's always good to have a talk, especially in light of the things being said over the last few days", said the coach. "I have no problems with Kovalev, or Begin, but I have a job to do. We put our cards on the table."

The meeting between the two allowed a point to be made.

"I have to play better, and everything will fall into place", says Kovalev. "I'm a professional, and I know what it takes to win."