O'Byrne: "As though I'd forgotten how to play!"

Share All sharing options for: O'Byrne: "As though I'd forgotten how to play!" 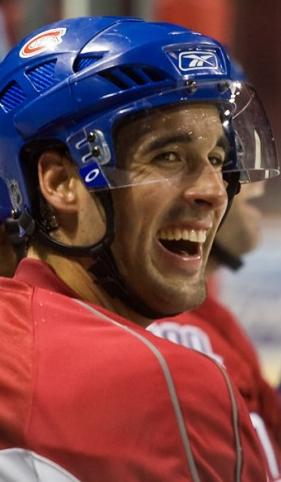 This is a translation of an interesting piece on Ryan O'Byrne from Marc Antoine Godin in yesterday's La Presse.

With Josh Gorges not in full form and Patrice Brisebois slightly bnged up, the Canadiens need a full effort from other defensemen. In that sense, it was good to see Ryan O'Byrne playing with confidence alongside Roman Hamrlik.

It had been a long time since we saw the O'Byrne of last season.

"I hadn't seen my old self in a good while either!", says the player concerned.

The game in question was the thrid for the 24 year old rearguard, since his callup from Hmilton on January 26.

What we seem to be seeing now is a defenseman who is much less stressed than he was before the holidays, when the 6' 5" colossus had the look of a scared kitten.

"Returning to Hamilton did me a lot of good", O'Byrne recognized. "I had completely lost my wits. It was as though I'd forgotten how to play!"

"I wasn't surprised to be sent down. Although it is unpleasant to live through, I needed to find my confidence again."

During the short purgatory, the gentle giant was inspired by Carey Price's trip to Hamilton, in a similar situation one year ago.

"Carey was sent down for a similar amount of time last January and came back with tons of confidence. I've tried to do the same", O'Byrne points out. 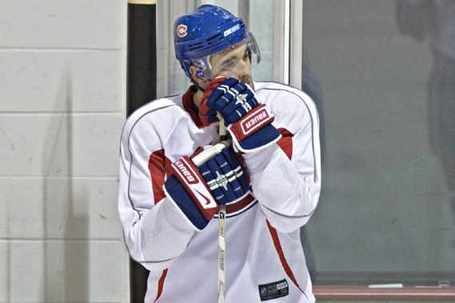 From a miserable first half of the season, most onlookers remember the goal O'Byrne scored into his own net most. But the young defenseman points to another game as to when he hit rock bottom.

"It was the game against Washington, where I fell down at the blue line, before falling again in a one on one break. I was rattled. You never want to have the impression you are letting down your team mates". O'Byrne remembered.

"I called my father some time around then, and he laughed a bit. He told me that sometimes bizarre things happen in hockey, and that it couldn't get worse than that. Pointing to the new year, he remarked that it offered a chance at a fresh start."

While O'Byrne rounds into form, his partner Roman Hamrlik played what was possibly his best game of the season on Tuesday.

"I know that I didn't play very well in the five or six games before that", admitted the Czech defender. "But during the Bruins game, I felt we were on the right track, even if the outcome was less than what we desired. We have to build on that."

During the month of January, Hamrlik has been a minus 9, which is well below expectations for him.

"There a lot of luck involved in that statistic, but it does tell when you are playing good defensively. You can be sure I'm trying to stay on the plus side."

Since last season, coach Carbonneau doesn't hesitate to pair the dependable and stable Hamrlik with different defenseman occording to team needs. We've seen him with O'Byrne, Gorges, Brisebois, and others.

"It shows just how dynamic he is", suggests O'Byrne. "After 1100 games played, he continues to be a premier player."

After playing the role of big brother to the rescue, Hamrlik had O'Byrne turn the tables for him against Crosby and company.

"We support each other well when the other is in a tough spot", explains O'Byrne. "Roman assures that there's always good communication out there, and on Tuesday, we really seemed to click."

It has been pointed out by some that Hamrlik is not playing as physically as he had last season. Those who take in the team's practices note the he is often the first player off the ice. It begs the question - is he playing hurt?

"Not at all", smiled Hamrlik. "All is good. If I'm the first to leave, it's because I'm older now and I need the rest!"