Habs Play For The "CH" For Sixty Minutes

Share All sharing options for: Habs Play For The "CH" For Sixty Minutes 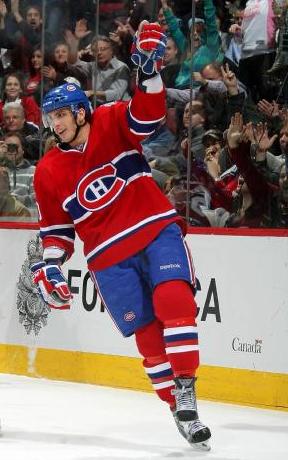 If a Canadiens fan had slipped into a coma, been abducted by aliens, or entered a monastery back in October and returned to normal existence to witness last nights Habs / Pingouin tilt, they could have sworn that everything was proceeding on schedule in this centenary season and the drive for twenty five.

For all intents, the Canadiens appeared against Pittsburgh as the team many believe that they are capable of being on most nights. For a full sixty minutes, minus a few flatlining seconds, the team that had recently been seen scrambling for identity for the past two weeks, looked to be the sum of its whole parts once more.

How is that done? Is it a switch they flick on and off? Was it an illusion? Chameleon metamorphosis?

You will read, everywhere you wish to, that 20 Canadiens players put individualism aside and put their full effort forth in a game for the first time in a good spell, and gave everyone a glimpse of what they can be when they work together as a team.

And without doubt, there is a strong ring of truth to that statement.

The Penguins have stumbled this year, bumbling out of the gate since the season kickoff. They are no longer the once feared machine of a season ago, and their lineup has been pillaged and fossilled of all depth by the Marian Hossa trade, free agency, and injuries. Their ranks depleted, they have filled out roster spots with a bevy of spare parts and Islander castoffs such as Satan, Fedotenko, Godard, Cooke and Boucher. The Sykora's, Whitney's, Dupuis' and goaltender Fleury, have rarely ever posed a problem of large proportions for Montreal.

Yes, there is always Crosby, Staal and Malkin to deal with, but they are a lot less lethal when supported by castaways and a not too threatening contingent of Wilkes - Barre callups. 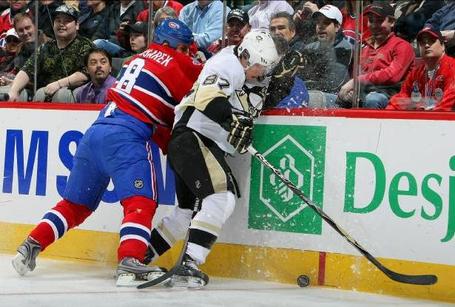 What Montreal did handily accomplish, was beating a team with better top end talent, that is just as hungry and desperate for a win as they are.

As a mechanism for putting back together a team mired in disarray, one couldn't ask for a better beginning.

And by next game, a beginning is all this one will have meant.

The meaningfulness of this particular win is in the fact that the Canadiens returned to the things that have long worked for them in exempliary fashion.

The constant hustle, movement, and speed of execution looked familiar once more. Through playing as a team, with everyone dedicated in the same direction, its individuals shone again, in creative playmaking and united zeal.

It was in fact quite beautiful and reassuring to watch.

The Canadiens, who are often rightly accused of playing at the level of their opponants, had the pedal to the metal for a full two periods and then some. 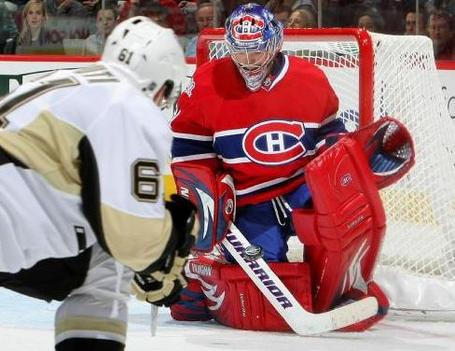 Things started on the right foot with the first shift by Alex Kovalev, who showed up ready to play after being put through the ringer the last few days. The first time Kovalev grabbed the puck, he drove with it to the net for a scoring chance. He looked inspired, and it seemed to rub off immediately.

What started well soon caught a rut, when a bad line change resulted in a Penguins goal 2:30 into the game. With Pittsburgh forward Luca Caputi driving to the net with the puck, the Canadiens fourth line of Begin, Kostopoulos, and Alex Henry were slow jumping over the boards and late arriving for a three on one net scrum that overwhelmed goalie Carey Price. The three Habs should have started knocking bodies around the second they got there, but instead tried to pick the puck from the swarm that had surrounded Price.

Credit to the Habs for not hanging their hands, and they evened the mark two minutes later when a Roman Hamrlik drive mystefied Fleury from fourty feet. The Canadiens took control of the game from that point on, and never looked back.

As mentioned, several Canadiens, if not all at some point, caught my attention in positive ways tonight. My eyes were fixated on the performance that Kovalev would deliver, and for one game it is safe to suggest that he owned up.

Kovalev managed to go an entire game without once pissing me off. No mean feat for him lately. Not once did I catch him overdoing twirling compass vertigo tricks with the puck. He played the game on a rink that is longer than it is wide for a change, and it served him and the team well. His north to south and back wasn't just limited to the periphery either. Several times he cruised the slot, going to the nets at both ends of the rink. I was satisfied with this one game of his, but it has to continue exactly in this manner.

As Kovy goes, so do the K brothers. Both Andrei and Sergei played their best games in weeks, and the Kovalev influence seems to help. Sergei in fact, looked reborn as the player he was during most of last season. 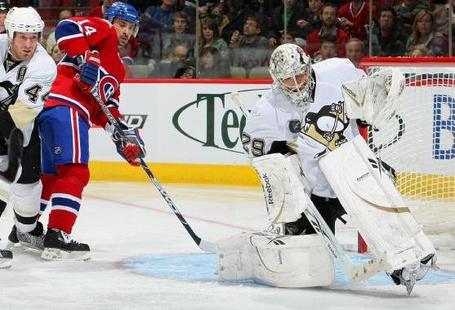 Roman Hamrlik, the game first star, was a physical presence all night long. He won puck battles, made savvy outlet passes, was an alert shooter, and read the play in concentrated calm for the game's duration. He went off hobbling at one moment, but soon returned to ward off that scare.

Hamrlik really brought out the best in Ryan O'Byrne in this one. Last night might have been Rhino's best game with the Habs this season. He hit with authority, was rarely out of position, carried the puck with confidence, and even pinched in to help out offensively when it felt safe. If he were to play every game with such command, he would make it hard for Patrice Brisebois to get his thousandth game in. In fairness, I wouldn't want Rhino out on every Crosby shift, but this was a strong game for him to build from.

Tomas Plekanec and Chris Higgins should be more appreciated for what they do and dinged less for their failures. Both players are honest workers and often victims of bad luck. Their occasional apprearances of confusion and frustration should never be interpreted as not showing up. Good players sometimes exhibit bad working habits, but these are two players who give a damn.

I was looking for a bit more offense from Koivu, and there were flashes of him coming back into form. He is still playing hurt to some extent, and his role in this one was to shutdown his opposing center. If you didn't see a whole lot of sparks from Malkin, it was Koivu doing his job.

Aside from impressive individual notes, the best part of this showing was how the team played like one for a change. Players on the ice played like units of five, and they were keyed and synched into each other better than I've seen in some time.

Gone was the "you want to do it all yourself, then by all means do it all alone" mentality.

It was beautiful hockey to watch, as players without the puck were constantly moving and shifting position to make available pass outlets of themselves. The speed and execution kept the Penguins on their heels and hesitant. The more the Canadiens did it, the better they were at it, and as the game progressed, such behavior began to create additional space for themselves to work with.

In pursuit of the puck, Montreal were relentless. They either won most battles or were in hot pursuit, and the Penguins were rushed into turnovers all game long.

It was nice to see the Habs on top of all the things they have been known to do well. It looks promising should they bring the same effort to Buffalo on Friday.