Share All sharing options for: Treating The Kovalev Malaise A Key To Canadiens Quickly Moving Forward 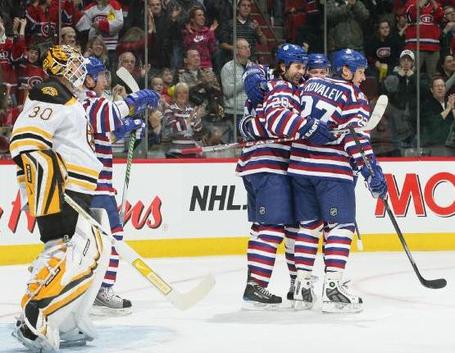 What to do with Alex Kovalev!

Canadiens coach Guy Carbonneau is a much more patient man than I will ever be. I lost all tolerance for the Kovalev act just before the All Star game. When Carbonneau benched the totally unproductive Kovalev for the majority of the third period against the Bruins on Sunday, you just knew seeing Kovalev seethe on the bench that the story was just beginning.

And we've all seen this movie before!

Kovalev was brutal during the 2006-07 season. As bad as he was, he had a resurgeance of the greatest kind last season, and won back almost every admirer he'd lost. So far this season, he has been a bit of both old selves, and lately it has taken a turn for the worst.

His sins are well known. As explosive as he can be within a game, he can just as easily be it's most irrelevant component. As much as he can appear confident in his abilities, he just as often delves into selfish plays that continuously fail to yield any result. As much as he perceives himself to be a leader on the team, he more often than not exemplifies the worst of examples by playing the most individualistic of styles. As joyous and inspiring as he sometimes is, he can be a sulking, frustrating burden for a team to bear.

On his better days, it is said of Kovalev that he is an extremely intelligent thinker, who often sees the game in a completely different light than lesser skilled players. Nicknamed "L' Artiste" for his random on ice art, he has a seemingly endless bag of tricks that sometimes serve to make fools of opposing foes.

The enigma of Kovalev, is that he has all these gifts minus the capacity to employ his team mates in his efforts. If he truly is as smart a thinker as some profess, it shouldn't be such a task for him to figure out what he needs to do to break out of his funk.

But then, there is ego involved.

Kovalev, like any player of his stature, enjoys the spotlight. He has said himself that he especially loves it in Montreal, where he feels he is appreciated. Everyone saw a great example of what makes Kovalev tick on All Star weekend. When he is primed and rolling, everyone gets in line behind him. The trouble is, it just doesn't happen with enough frequency and consistency for it to be counted upon on a regular basis.

Often when things aren't going his way, he only knows how to make it worse - usually to the detriment of the team.

I was getting quite peeved at Benoit Brunet during Sunday's game, as he kept referring to how well Zdeno Chara had Kovalev completely neutralized. I was ticked, because from what I saw, Kovalev was making it easy work for the Bruins pillar. For a player who has been in the league for fifteen seasons, you would think Kovalev has accumulated more resolve than he displays.

Yes, Chara has great reach, but he's not infallable. Because of his stick lengh, he's easier to play against when he is challenged between the skate boots, or the puck is shot past him on the opposite side. Skating up to him and coiling to make a move plays right into his strenths, and that was all Kovalev attempted to do for 40 minutes. His linemates, because of this coverage, were for the most part freed from Chara on the day. Kovalev made few attempts to use his linemates sooner when in trouble. For Kovalev, it too often seems as though his linemates are his last resort.

For the past four or five games, Kovalev has appeared as though he is skating in molasses. His stride looks laboured and unwilling, and he glides in the neutral zone so uninspired it comes off as sulking. It's as if he simply doesn't care.

Some have gone as far as suggesting that he is sending a message of sorts, to the team that he is unhappy with certain things, namely his status on the team. It's an old story, filled with speculation from dubious sources that Kovalev feels he should be permanently annointed team leader.

Despite my better instincts, I am starting to think that as ridiculous as all this seems, there just might be something to it. 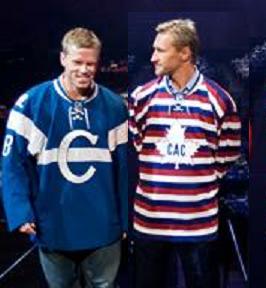 Listening to CKAC this morning, they have brought the question down to it being a matter whether it is Kovalev at fault or if it is in fact Carbonneau who is handling him badly. The question is a joke really, and the station barely veiled that it was at Kovalev that the darts were pointed. Before turning the phones lines over to listeners, they alluded to an inner team turmoil in regards to Kovalev's conduct, suggesting that Carbonneau's benching of the player would have received a round of applause from supportive players fed up with Kovalev.

They mentioned sides in the perception, stating that the Russian born players - Markov and the Kostitsyn's - have had a habit of seeing things through Kovalev's eyes, and that the non European players were not in line with such views.

The station played three audio clips, from the english, french and Russian factions on the team to point out that all was not well. The first came from the lips of Mike Komisarek, who spoke pointedly of the team needing everyone on board in order to win. The clip was taken after the Bruins game. Another viewpoint from Steve Begin, after a different game, stated basically the same thing.

The third clip was the juice, and it came from none other than Russian cohort Andrei Markov, hardly known for his volluble english skills or his fiery declarations. It begins with Markov seemingly defending Kovalev and his ways, but quickly spins around to suggest what many have been saying about Kovalev all along.

What Markov said, was that Kovalev has a particular way of approaching games. He has his things that he does within a game, and Markov termed them "bad for the team". He then made the suggestion that when a player realizes he is doing things wrong, he must change his ways.

That is pretty pointed. 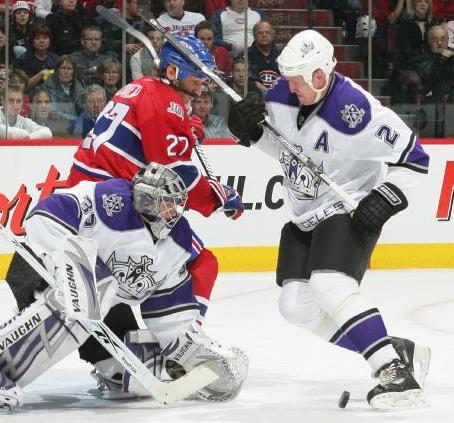 For a couple of seasons now, there has been much ado about the relationship between Canadiens captain Saku Koivu and star winger Alex Kovalev. The key word here is in fact "speculation", as there seems little factual meat that there exists any kind of rift between the pair other than the notion that they're dictinct personalities may not mesh tightly with one another. The players sit next to one another in the dressing room, and depending on the eye of the beholder there is either a cordial respect or a quiet chill between the two.

The sensationalist french Montreal media think there is a story there, and a few seem ready to stake their reps on it. They point to how well Kovalev play when Koivu is out with an injury. They write stories on Kovalev's leadership when he wears the "C". They take shots, sometimes prematurely at Koivu, when he fails to be Jean Beliveau.

Sometimes the chatter reaches a ridiculous proportion, and smallish subtleties are given to a microscopic examination.

When Koivu recently returned from injury, CKAC were on his case once more. After a solitary practice at the Brossard complex, it was said that Koivu skated off the rink to cheers and hellos from fans on hand, and that Koivu never acknowleged their presence with a single, simple gesture. Their zeal to report it was so profuse, that it hit the airwaves before Koivu had likely finished showering. A caller immediately phoned in to state that Koivu had just spend 20 minutes chatting and signing for autograph seekers and well wishers outside the arena.

Koivu, quite simply, is just not as demonstrative as Kovalev. The captain gestures are on a subtle level, not a grand stage. Just as leadership is done by example, and not from a podium. For many, Koivu needs no defending. For others, all that shows from him is what he lacks. It's my belief that a chosen perception often says much more about the person speaking than the subject itself.

The mechanism of the Montreal hockey media explains much of what is at the core of all this. The english sides mainly get the news and deliver it. The french sides are many more, and hence more competitive. They've never failed to show woodies for the players with better quotes - regardless of mother tongue. Koivu is as dry as Gainey. Kovalev, on the other hand, is all one liners and zingers in good times and bad.

Still, watching Kovalev meander on blades lately, you have to wonder the reasons for his unhappiness.

Could it really be Koivu?

Could it be contract negotiations?

Whatever the problem, it has now reached Carbonneau, and he was asked the nasty Koivu question and slammed the door shut on it quickly.

"If a player needs a "C" to perform.....". You can guess the rest. Carbonneau maintained the discussion was between him and Kovalev.

The CKAC call in show (Parlons Hockey) is currently airing as I post this, and there will be a audio link available once it is finished. I'll be sure to add the full Markov quote on Kovalev as well as that link as soon as I am able later today. For now, here is the page where it will be appearing.

For bilingual readers, both Pat Burns and Jacques Demers weighed in on the subject. Burns, a former cop gets right into (right after talking for a spell about Krispy Kreme donuts!), and likens the Carbonneau / Kovalev relation to a stick of dynamite.

Burns mentions that what happens is both embarrassing for the player who is sat down shaking his head while steaming on the bench, and for the coach, who if he continues to play him and he's unproductive, looks like a dupe. Burns says that a coach in this situation will not chew the player or have a meeting with him immediately. The coach will usually wait for the player to come and see him - and without fail, usually he will. Listen to what Burns has to say here.

Demers for his part, stands firmly behind Carbonneau. He was asked what the consequences were of sitting a player earning Kovalev salary was, and what the possible repercussions would be within the team. Demers flipped the question around and asked what would be the repercussions of not benching a player acting in such a way, when most of his team mates are practically demanding that it is done. Demers said it was about time that Kovalev got disciplined, and that he doubts that it has anything to do with Koivu.

Later in the conversation, Demers was unequivocal in stating that it is beyond a doubt that it is Carbonneau job to light a fire under Kovalev and get him playing the way he is capable of. He did not get into the responsabilities of the player, which go without saying. Demers likes Kovalev as a person, but makes it known that he feels that he is upset at the moment because he is not undercontract for next season. Demers had much more to say on it, and you can catch it here.

Regardless of the origin of Kovalev's disatisfaction, attitude, and lack of conviction, it will be his task to put things right in short order. What he does will show everyone what he is made of, either way. If the reaction is anything less than immediate, consider his days in Montreal numbered - in single digits!