Share All sharing options for: Canadiens Character About To Endure Severe Test 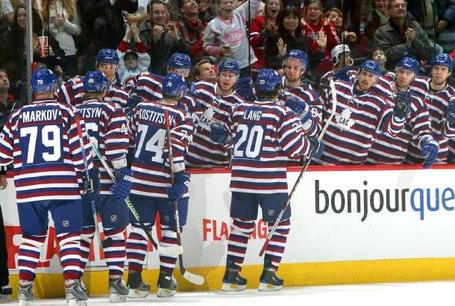 Still reeling from all that the Canadiens and Bruins game laid bare on the table? You're not alone!

My thoughts on this one are scattered full of messy, angry emotions and conflicting discoveries - and most aren't new. I believe that this game will leave all kinds of marks on the Habs season, depending on how they go forward from here.

Prior to the Boston game, my thinking was that the Canadiens needed a solid showing just as much as they needed a win. They needed to convince themselves that the Bruins were not as out of reach as the standings told. They needed to play a tight defensive game, give themselves a chance to win, and emerge from it with a sense that a meaningful challenge with the Bruins will take place at some further point down the road. Despite the loss, I believed they accomplished that. Most of the Canadiens players played an inspired game for most of 60 minutes. Time will tell. 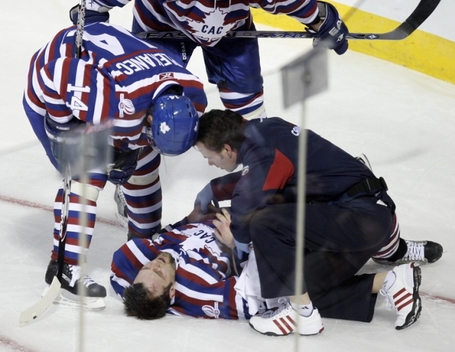 Along the way, the Habs character will be severely tested. The weekend as a whole was not kind to the Canadiens. Lang has been lost for the season with a torn achilles tendon. Guillaume will be out for a bit, no word on his condition yet. Gorges is day to day with concussion symptoms. Brisebois was injured in a collision with Hamrlik on Saturday and the injury has not been disclosed. Kovalev is back to being stuck in the same morass as in 2006-07, and seems as clueless as to why all over again. Koivu is being forced to play at less than 100%. Tanguay is just starting to skate again, but is weeks away from returning.

On the good side, Georges Laraque is said to be close to a return. Whoop-ti-doo!

The Canadiens have 62 points and 32 games left to play, and if it is 92 points they need to clinch a playoff spot, they will need 15 more wins this season - a task that grows more difficult with each additional piece of the sky falling on their head. 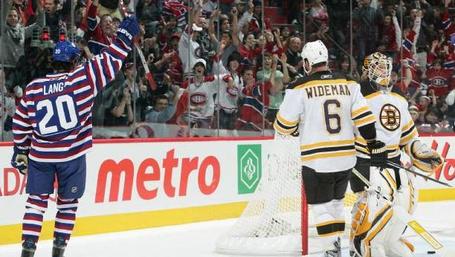 The focus of the team will shift to becoming the strongest unit they can be by the time the playoffs start. The will need to further tighten up their game, hope the midly rejuvenated power play continues to give them a goal per game or more, and pray that the lineup they are left with, gels in the final slice of the season. The Canadiens have learned not to expect gifts before the trade deadline, so it's foolish to look for cures there.

Good things can, on occasion, arise through buckling down, struggling, digging deep, and battling hard for every inch. The road to this point in the campaign has been no easy ride, but for a team that currently sits fourth in the Northeast Division, they have surely endured plenty to arrive where they are now. Lessons taken from that, will help them going forward. With expectations possibly lowered, a burden may in some ways have been removed.

If through all this, they can get their act together, the playoffs may present an opportunity for redemption. 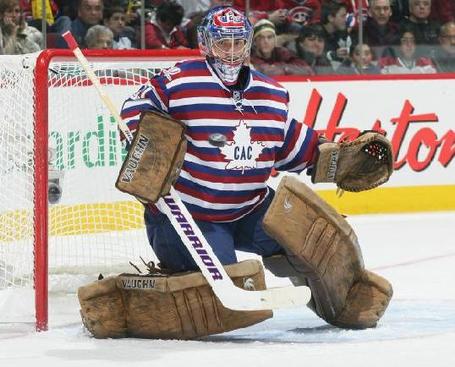 On a different note....how was your weekend?

Mine was so nutty, I needed all of Monday to recover from it. Yup, Sunday was quite a ride. Sandwiched between the Canadiens game and a Super Bowl I wasn't planning to watch in full, was my daughter's hockey game, and the entire whirlwind added up to one big eventful day filled with all kinds of different emotions.

As for the Super Bowl, all I intended to do was take in the half time show - Boss fan that I am. Tuning in right before the end if the second quarter, I was just in time to catch that historic interception - an unbelievable 100 yard runback from goaline to goaline. It turned out to be one thriller of a game, dramatic until the final seconds. At first, I'd have taken 3 hours of Springsteen and 12 minutes of football, instead of the reverse, but this was one compelling night of entertainment. And I needed it!

Funny thing about when the Boss is on T.V. is that I usually get a few phonecalls from old friends informing me of that which I already know. I've seen Springsteen 19 times in concert, and many acquaitences see Bruce and think of me. Ring, ring!

One thing led to another Sunday night, and next thing I know I'm a couple of blocks down the road, sauced and cheering on the Cardinals!

Hours before the Habs and Bruins tilt and all it encompassed had barely settled in my brain, I was at the old barn down the road for my kid's game. Yours truly got into it in a pretty bad way with the game's official, and my daughter's coach when the game way over. I became sort of the poster boy, for how not to behave as a parent at a hockey game.

With seconds left on the clock in the third, my daughter earned herself a slashing call - totally merited - when she whacked another player's stick in a puck battle. As play was stopped, the other kid retaliated in full few of the ref, and my daughter was cracked with a good two hander across both wrists, with no call made. She fell to the ice in pain, the official acting as though nothing happened.

I lost it right there and gave it to the official really bad. I was incensed. He was looking straight at my daughter when she was slashed. With all of two seconds on the clock, he threatned to have me tossed. My kid's coach then tried to muzzle me, explaining that the officials assigned for this game had failed to show because of a last minute rescheduling, and the coaches for both teams had simply plucked this standby former ref from the crowd to handle the game, giving him a whistle and some instruction. It's so nice to know our kids are safe and in good hands! I will be having a hearing with the league's officials on this matter this week.