Share All sharing options for: The W5 on new Hab Glen Metropolit 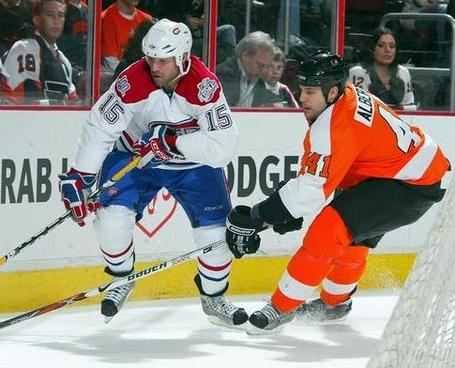 Sometime around noon yesterday, I heard the news that the Canadiens had picked up center Glen Metropolit on waivers from Philadelphia, who the Habs played last night.

An odd transaction, I first thought, picturing Metropolit walking from one dressing room across a hall to another.

His name rung a bell for me as a player who always seemed to perk up for games against the Canadiens. In the playoffs with Boston last season, he scored a key goal, and in the Canadiens last meeting with the Flyers, a 5-2 Habs win, Metropolit assisted on both Philly goals.

He's obviously a well travelled and experienced journeyman and in the present term provides the Canadiens with more depth at center than what has been offered by Kyle Chipchura. He's on salary for one more season at an even million per. Metropolit is a 34 year old veteran of 7 NHL seasons and as many teams. He's also spent two seasons with Jokerit Helsinki of the Swedish Elite League, where he lead the league in scoring in 2003-04.

Of course, like all Canadiens fans he's not the acquisition down the middle I was hoping Gainey would land for the team. That doesn't mean the move does not have merit for a team looking to stabilize it's team work ethic after a grave February spinnout.

At 5' 10" and 195 lbs, Metropolit is hardly a physical presence. He is however a very competitive player with a capable offensive upside. In 55 games with the Flyers, Metropolit had 4-10-14 totals. I like what I saw of his last night, in what had to be the most unsettling of games for him.

Metropolit's background, is even more interesting that his day could possibly have been yesterday.

As he told it, he attended the morning practice with the Flyers, although he had been placed on waivers. Had he cleared, it meant a walk across the street to the Spectrum, home of the AHL Philadelphia Phantoms. He then went home, had a nap, knowing that no team had yet put a claim in on him. Just after noon, he was awoken by a phone call from Flyers GM Paul Holmgren.

"I've good news and bad news for you. The good news is you're playing tonight. The bad news is that it is against us."

Talk about waking from a dream thinking,"What the..." 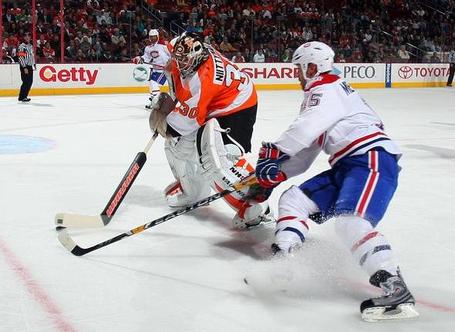 Judging by Metropolit's road in life, this latest road bump could not have caused him much grief. His journey into NHL hockey is far from the standard tale.

Metropolit grew up in the Cabbage Town projects of Toronto, an area well known as being badly drug infested. In a family of three, headed by an often unemployed single mother, Glen was tossed about from foster homes for close to two years. Hockey was his saving grace. A younger brother, Troy, didn't fare as well.

Glen's mother, Linda Lafferty, was a caring woman dedicated to her family's well being. After losing her job as an input operator at the Toronto Stock Exchange, she placed her boys in foster homes when she could no longer support them as she wished. They spent one Christmas sheltered in a hostel, that burned down not long after they arrived. Their Christmas gifts consisted of mittens and a hat from a local church. After the fire, they were reunited with their mother in a hotel populated with crack addicts and hookers.

Moving to another foster home, Glen was separated from his mother and brother. All along way, the boys had played hockey, but Troy did not last in the game because of issues troubling him. The drug culture was so bad in Cabbage Town, that peddlers were often found inside arenas, blatantly selling drugs to players. Glen went one way, Troy another.

Glen fell in with an uncle who became a father figure to him. The uncle helped him on his hockey path while his brother was lead astray. In 1999, Troy and two other men were convicted in the car jacking of a high profile Toronto lawyer. While serving his sentence, he was charged with a murder that has yet to go to trial. The brothers speak only on occasions.

At 16, Glen headed west to pursue his hockey dreams in a less conflicting environment. Never an elite player, he did enough things well to progress through various minor and professional leagues. He was noticed by the Washington in 1999, while playing with the IHL with the Grand Rapids Griffins. After posting 28-53-81 totals in 77 IHL games, he was offered an NHL contract by the Capitals.

It is quite curious, and maybe not all that coincidental, that Metropolit now joins the Canadiens only weeks after players on the club have been alleged to have fallen in with dubious drug peddlers. A character person and player, the newest Canadien is obviously a veteran of smooth transitions from rough patches, both on and off the ice.

He should fit in well.

Must reads on Metropolit's path to the NHL can be found here and here.