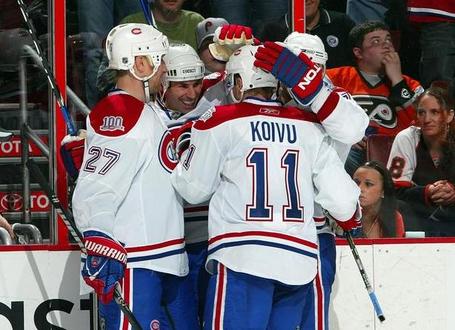 It sounds so much better now to hear it said that the Canadiens have won three straight!

Much better than hearing about winning only two of ten.

With the 4-3 overtime win against Philadelphia, it can be made official that the Habs have turned the corner. They have gotten their act together, and have a 4-2-1 record in the past seven games.

There could be all kinds of theories as to how these changes have come about, but truly the team effort is what should be credited most. Beyond the individual heroics, it is the team coming together that has allowed for the turning of things. Every player on the club seems to have gotten back to focusing on their own work, and not that of others. The combined efforts have helped place recent distractions deep in the background.

And now, lo and behold, there are other emerging stories to tell.

Two weeks ago, there were all kinds of sorespots on this team. The goaltending was horrid. The powerplay had no zap. Leadership was questioned. Kovalev's play was disgustingly absent of commitment. There was desperation for a number one center. Dressing room issues went from a whisper to a scream. Lines were unsettled. The defense was all out of kilter. The pressure placed on the team to win in it's centenial season seemed to have become a burden the players were crumbling under.

This is where most teams fire their coaches or begin to make all kinds of ill advised trades. 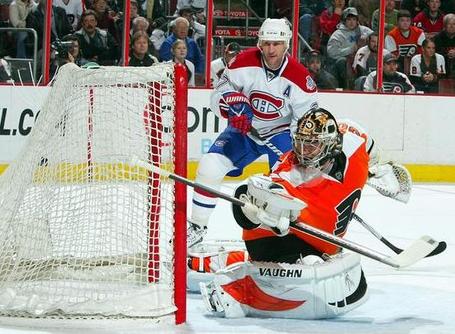 General Manager Bob Gainey made a daring move. He decided to sit Alex Kovalev down for two games. Everyone from Guy Lafleur to your dog thought Gainey was shooting himself in the foot. Gainey and Kovalev had another waterfront walk and talk, and Kovalev pronounced himself refereshed and ready to go.

The Canadiens haven't lost since, and of the 13 goals scored in the last three games, Kovalev has been in on seven of them.

To the surprise of almost everyone, Jaroslav Halak is making a run at the number one job, having worked out all the repetitive errors in his game. He's allowed only six goals in the last three games, rather than six goals per game.

Gainey was practically mocked for bringing in Mathieu Schneider to settle the Canadiens defense and add some power play punch. A fossil, Schneider was termed. The power play is 10 for 24, a 41% conversion rate, in the five games since Schneider's arrival. 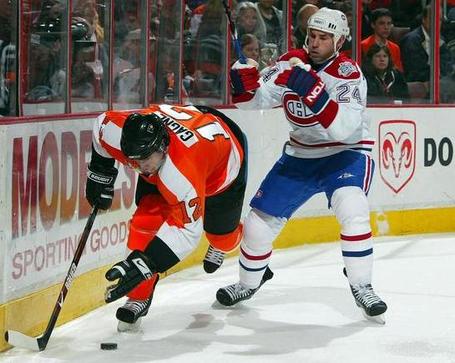 When leadership is called into question, the usual target is Saku Koivu. Koivu has been equal to himself, and now that the team is back to winning, the things he does so well are being noticed once more. His great penalty killing in the Vancouver game, that helped set up the eventual game winner was leadership exemplified. And there he was again last night in Philly, winning three straight offensive zone faceoffs that lead to the game winning goal.

The dressing room issues have evaporated right when everyone thought they would only get worse, the moment news hit of Habs players being involved with drug traffickers. That it seemed to have an opposite effect, is a credit to how close this group might truly be. It may just have bonded the team like no afternoon of bowling ever could.

The furor over the numerous shuffling of lines has settled down after all possibilities were exhausted. It is something a coach must do when searching for solutions. Bringing it all back to familiar ground has helped eliminate much confusion.

The etch - a - sketch defense has been settled with Schneider's acquisition, and now ice time is more properly handed out. Mistakes are still being made in large number, but there are less of them than before. It is what it should be - a work in progress that seems to be getting progressively better. 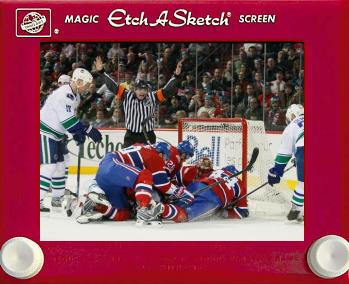 Now with all that cleared up, and with the trade deadline approaching, what the Canadiens really need to do is find a centerman that can score almost every game.

But wait.....Tomas Plekanec has now scored in five straight games! The crucial element, that player he was last season, seems to have returned.

Depending on your faith in this group of players, you could file all these good happenings into three categories - accidental, inevitable, or planned. You could itch your noggin raw about it all day long, but it comes down to certain unshakable foundations being at the root of it. You can credit good luck if you will, summon the element of fate, or take a logical look.

The Canadiens are coming back around because they have most of all the same personnel in place that they had when the season began. Never mind the injuries and resulting call ups, the entity of the group as a whole, has not been badly messed with.

The Canadiens team that started the season on a tear, and filled everyone's heads with dreams of a 25th Stanley Cup are still intact. While many clubs are presently hoping to add an impact player to their lineup before the trade deadline, the Canadiens will soon see Alex Tanguay return, followed by Guillaume Latendresse, and if they last into the playoffs long enough, maybe even Robert Lang.

And if you think that the Canadiens aren't a better team for having weathered recent storms, you haven't been paying attention.