Share All sharing options for: Georges Laraque Bites His Tongue, Twists His Words 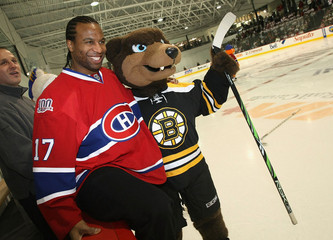 Who woulda thunk it that good ol' Big Georges Laraque would play the part of drama queen?

Maybe this story flew under your radar over the past few days. I can hardly blame you if it did. I have barely typed two sentences about Laraque all winter, because frankly, the man who was supposed to enable every Canadiens player to grow a few inches this winter rarely warranted it.

And we could have all kinds of fun with that "grow a few inches" stuff, couldn't we?

What occured in his case, that made him the Canadiens comedian of the week, is that one day after whinning about his playing time and alluding to wishing for a trade, Laraque does a 360, bites his tongue, and takes it all back.

Backwards, I say. Maybe he read this!

It's totally understandable that Laraque may not be a happy camper right about now. There are even several somewhat valid reasons for it, but none important enough to mention. But choosing this improper time to vent is inexcusable.

Especially for a player whose role it is to supposedly defend team mates, he should have realized this was the worst time for him to speak out. Either way, whatever had his jock mangled in his mouthguard, he should have saved it for a private chit chat with the coach and GM. 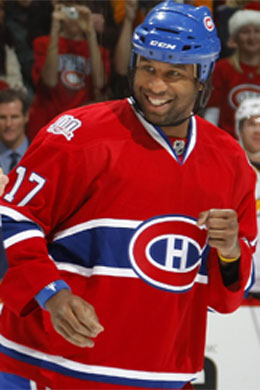 I'm not sure if I could say I liked the idea of the Laraque signing over the past summer. I did however warm to it based on the players positive reaction to it. After Laraque's season mulliganed out of the gate, I started having doubts.

Laraque's first few months on the club were mired in mixed signals. There was that groin, or leg, or back injury thing, that sparked rehab rumours. For a spell he seemed to do more blogging than he did fist bopping. He got into some games where he was as irrelevant as Sergei Samsonov ever was, and then he starts yapping like a pacifist for the anti fighting camp.

Somewhere in all this, I got to thinking that Laraque's ego must be as big as the great outdoors. Who really gave a fat crapper about his opinion on a variety of subjects either way. He was being paid to do a job he seemed more intent on avoiding. He seemed more concerned about his celebrity since coming to Montreal, and he cannot hide from that fact.

Have you ever seen a picture of John Ferguson smilling?

Ever seen a shot of Chris Nilan without that hint of a crooked grin saying he'd just as soon carve you a new forehead?

Georges Laraque is being paid to be that!

When a team's designated goon - and I'm not shy to appropriate the term - starts thinking he's a full borne hockey player, it's game over, folks.

During the last few games he has played in, Laraque has appeared to have been conquered by the factions involved in what Mike Milbury likes to call the pansification of hockey.

John Ferguson lead with his fists when indulging in an opponent.

After having blogged at great length on his own personal site about "the code" between fighters, Laraque let every other tough guy in the league know that he would not challenge them unless they first accepted his invitation.

I read it and coiled. The Canadiens likely got wind of it. The blog was his last. 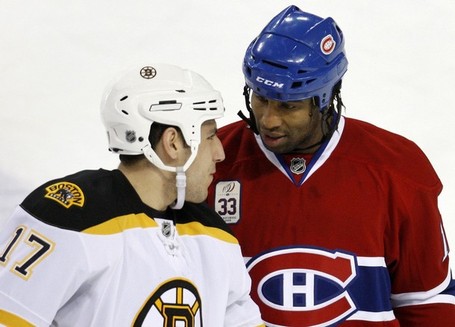 Since then, Laraque has appeared to scare no one, and each time I saw him pass up an opportunity to feed a foe some knuckles, I couldn't help think of that last article he wrote.

Last season, Canadiens coach Carbonneau was all behind the idea of "team toughness". During the last two games - with Laraque on the sideliness - that is exactly what the team brought.

Any coincidence that it won those games?

Any coincidence that after them, Laraque chose to vent his frustration?

Remember that scene in "Back To The Future", where Marty McFly is stuck in the 1950's timewarp, and he starts seeing his fingers, hand, and arm start disappearing?

That was Laraque on Monday.

The "team toughness" concept will always win over employing a designated goon. The logic behind why it works much better is as logical as basic math.

I'll use tonight's game in Philadelphia as an example.

Laraque might play six to eight minutes while toiling on the fourth line. Most of the game, he will be lined up against a player of his ilk. Odds are, if the pair fight, they will drop them for no evident reason within the first five minutes of the game, for no more cause than to establish that they are both there. The bout will epitomize pointlessness.

Players on the Canadiens top three lines will not grow inches, because Laraque is simply not solid enough a player to take a shift with them. So he will be as irrelevant as what he does is pointless.

Sometime during the course of the game, a Flyers' player - for argument sake we'll say Mike Richards - throws a flying elbow at Saku Koivu's head. What are the chances that the next shift that lines Richards' line against Koivu's, finds Laraque riding shotgun on it?

What Laraque will likely do to defend what Richard did to Koivu, is drop the gloves with Riley Cote.

And that will settle that, until Richards comes out on the following shift and crosschecks Koivu behind the head.

Like this. Mike Komisarek, seeing what is being done to Koivu, pounces on Richards, and pounds the living daylights out of him. So what if he gets an additional two for instigating - the Habs can kill a penalty, can they not?

Richards won't line up against Laraque all game long, but if he sees Komisarek out there, will he take the same liberties a second time?

There is all kinds of talk on the ice, but it is actions that speak. For me, goon on goon does little for conversation.

If I were a coach in such a situation - and I make apologies to no one for this - I would send the goon out in mid shift, with directions to make a straight beeline for a targeted player, and tell him to pummel the guy into submission.

Damn the instigator rule, I'd want players taking liberties with mine to think twice. Do this three or four times a season, and the result will be a whole lot of players backing off from the stupid stuff.

Over time, doing this would eliminate the need for goons who never drop the gloves with the perpetrators anyway. Along the way, it would re - establish "team toughness" for every club, wipe out the uneccessary goons on all teams, and likely serve in an offhanded way to clean up what goes on in games.

It makes more sense than having Georges Laraque fight Riley Cote for what Mike Richards did to Saku Koivu nine shifts before.

That sound you hear coming from Georges Laraque, is the dinosaur's wail.