Koivu Deserves His Place Among Canadiens All Time Elite

Share All sharing options for: Koivu Deserves His Place Among Canadiens All Time Elite 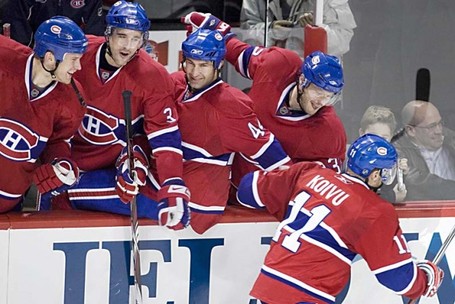 It was a typically selfless sacrifice play, a gesture among many others of willful intent within a game, from a player who has never failed to place the team ahead of himself.

On the play, during a 5 on 3 disadvantage, Canadiens captain Saku Koivu covering the point, spun a pirouette, slashing the puck off an opponent's stick, and then dove to poke it away from another, and onto the blade of a dashing Tomas Plekanec, emerging into the clear at center ice after two minutes served in the sin bin.

Plekanec went in alone to score a what became the game's winning goal.

A highlight reel marker for Plekanec. An historic achievement for Koivu.

With the assist, Koivu had tied Habs great Elmer Lach for tenth place on the Canadiens all time scoring list.

The feat was addressed and celebrated with the usual amount of fanfare that greets Koivu's accomplishments. The point touched no milestone, broke no record, and reached no big round number.

Saku Koivu's 623rd NHL regular season point, monumental as it is, was greeted without trumpets and declarations. Such is often the case with the 13 year veteran.

History will one day tell whether Koivu truly is underappreaciated in the realm of Montreal Canadiens' greats. For now, many will be surprised to find his name amongst the Richard brothers, and players named Lafleur, Beliveau, Robinson, Cournoyer, Lemaire, Shutt, Geoffrion and Lach, winners of a combined 64 Stanley Cups.

However Koivu's tenure in Montreal is eventually termed, it will likely consider what he has not been able to achieve over his time, starting with winning the hallowed Cup.

While none of the players listed above would ever dare suggest they won anything on their own, Koivu has scraped his way into their midst almost completely on his own.

Still, the cynical will persist in detailing all of what Koivu isn't, as opposed to what he is and should be valued for. It is as though his gravest fault was in being born 50 years too late to be surrounded by the greatest of greats.

At some point, the conscience of cynics ought to deal with all of what Koivu has been the essense of for 13 seasons. 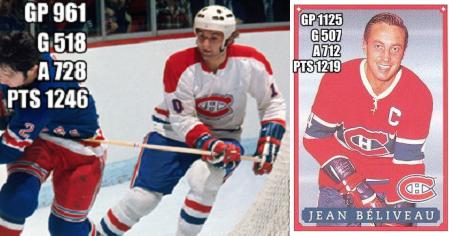 During his time, Koivu has been the hardest of battlers, often injured due to his competitive nature.

A large heart rather than a large man, he has been tasked in the role of captain longer than anyone not named Beliveau.

He's been maligned badly along the way, criticized at every step for not being more than he already was.

He could give everything of himself, but his best has never been good enough.

A native of Finland who had to learn english, he is knocked for not speaking french.

At times, it has been demanded of him that he carry a club with no one worth his weight on it.

He's battled back from cancer in the span of one season, returning to lead his charges through two rounds of playoffs.

He's lost part of the vision in one eye after an injury, and returned to have his most productive season while having to adjust to seeing things differently. 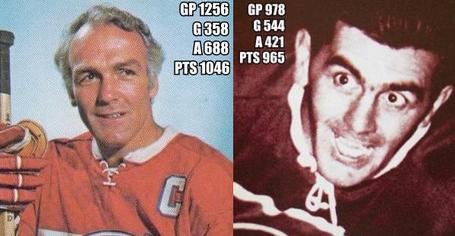 Along the entire course of this, his leadership has been relentlessly questioned due to his humble nature.

And now, he has clawed his way into the group of all time team leaders virtually by himself, and many are wondering whether he will even be offered a contract next summer.

After all this, there are then those who question why he maintains a sheltered distance from the media that tends to rough ride him at every available go.

Through years of hospital visits to sick children and helping to raise donations of millions in funds, his leadership is described as never vocal enough.

Some people I gather, could find a way to dislike the sun!

Koivu's achievement in reaching the Canadiens all time top ten scorers is no small feat. Consider all the knocks against him, and the fact that he keeps getting back up only to be pounded for more, and a you get a sliver of an idea of the resilience of the man.

It is often said, that since the Canadiens last dynasty ended in 1979, that there has only been one true warrior - Patrick Roy - worthy of the names that hang from the Bell Centre rafters. While that is far from completely precise, it is a major slight to Koivu. 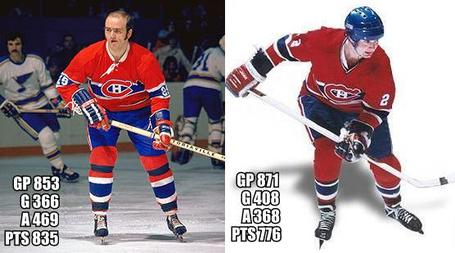 In all those years since, Koivu is the only player to pierce the Habs all time top ten point getters. It is worthy of the accomplishments of those he is joining by mere fact that he had few compatriots helping him get there. The cast of Koivu's team mates - Recchi, Savage, Rucinsky, and Ryder - don't quite measure up to the componants of the Punch Line or the trio of Lafleur, Lemaire and Shutt, who were all around together long enough to help each other deep into that list.

Koivu may not win that Cup many feel his efforts deserve. He may also not live to see his number eleven raised above every head in the Bell. In the end, such accolades might not be the best measuring sticks for Koivu, who had to suffer the unfortunate fate of being dropped into a time in Habs lore when virtually every ounce of vision vanished for ten seasons.

Being the most consistent player during the club's most inconsistent years is not Koivu's cross to bear.

He is, after all, the man responsible for giving the Bell Centre a heart. The arena was a cold and distant place, until the night he stepped on that ice, after having survived a cancer scare.

He may one day leave the game without all that we've wanted for him, he should not leave it without every single Canadiens fan's utmost and everlasting respect.

Shame on anyone who denies him as much. 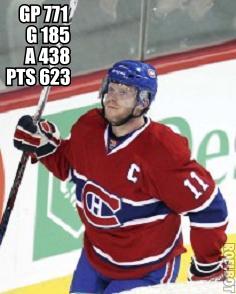