Share All sharing options for: Stewart Turns Heads In Fight With Canucks O'Brien 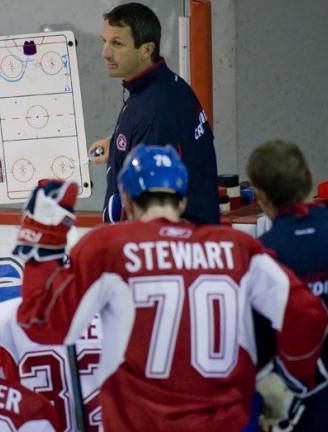 Canadiens forward Gregory Stewart turned a few heads with his pugilistic talents on Tuesday against Vancouver. Shane O'Brien might have been the most surprised. The Canucks defenseman dominated the early part of the fight after suckerpunching (my word) his rival. But Stewart, who is ambidextrous, turned the table before the arrival of officials.

"I know O'Brien only a little", says Stewart. "He was among a group of players I trained with this past summer. After the fight, he asked if I was a lefty. I think he was surprised."

Stewart offered that certain players are one dimensional boxers. They cannot adapt to a style foreign to them.

"I can hit just as well from the right as the left", Stewart explained. The player who does not consider himself a fighter added, " Mon role is to to be strong on the forecheck and put pressure on the opposing team's defense. But I will always be there to defend a team mate."