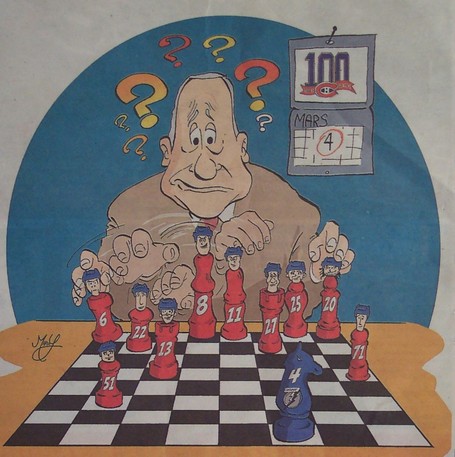 It will be curious to see how Canadiens GM Bob Gainey approaches the trade deadline, now just six days away. As March 4 gets closer, teams usually identified as buyers and sellers are about as clear as mud. This season's trade speculation is clouded by crowded standings, declining league revenues projected for next season, a possible salary cap standstill, and in the Canadiens case, the impending unrestricted free agency of up to 11 players.

Those UFA's in question, could very well come into play for Gainey, as it is highly doubt that all 11 would wish to be retained next summer.

On last season's date, Gainey was in the running for the Marian Hossa sweepstakes right up until the 3 p.m. cutoff. In the end, he made no acquisitions, but did part with a player in goalie Critobal Huet that he had no intention of resigning this past summer. This season's scenario has that familiar element once again as the Canadiens are tight against the cap and willundoubtably need to subtract contracts in order to bring in new players.

The current Canadiens roster has been in constant flux all season due to injuries, callups, and sub par play by several players. My guess is that Gainey will move a player or two who are no longer in the team's plans beyond this season. With one eye on the playoffs and the other on free agency next summer, Gainey will likely be seeking to improve the current club while doing next year's housecleaning in one fell swoop.

It will be interesting - as well as critical - to see how Gainey proceeds with no guarantee of a playoff spot this late in the season. With the club slumping of late, it will be seen as an opportunity to fix some issues if players with the right fit are made available. Of course, the Canadiens will not be the only team in the running.

So far, teams identified as sellers would include Atlanta, Tampa, Ottawa, Islanders, Toronto in the East, and Phoenix, St. Louis, Los Angeles and Colorado in the West. It could also be that Ottawa and Los Angeles consider themselves buyers. Other clubs, who designate themselves as buyers, might well be dangling star players facing free agency or whose contracts are burdening their organizations from moving forward with other scenarios. In that, Florida's Jay Bowmeester would be an example of the former, and Anaheim's Chris Pronger an example of the latter.

Gainey got the ball rolling early, as to the Canadiens biggest current needs by sacrificing no roster assets in acquiring defenseman Mathieu Schneider from Atlanta on Monday of last week. In the short term upside it looks as Gainey has made a positive move in helping to resurrect the team's powerplay, but the Canadiens still allowed a whopping 47 shots against Ottawa last weekend. Gainey might not be done toying with the team's blueline.

As is usual with this time of year, several names are already being tossed around as players who might interest the Canadiens before March 4. While there is no one player as targetted as Hossa was last season, there could be some star calibre players. Below is a list of 20 players who will be talked about that may interest the Canadiens in some way. For each, I will speculate from both sides on what would be offered to acquire the player in addition to my take on the prospective move. 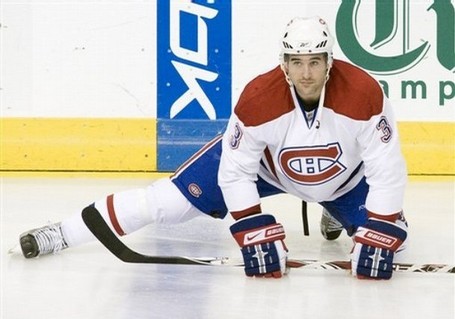 It is said the Ducks might be willing to part with Pronger, who is 33 and carries $6.25 million over to next season. The story is the canards would rather put their cash on a returning Scott Niedermayer. If such is the case, Anaheim would not want a large contract in return. On Montreal's downside, Mike Komisarek will command similar money next season, so the fit would best be temporary. It is also unsure if Pronger would relish a return to Canada, considering past problems.

Anaheim Offer: Ryan O'Byrne, Sergei Kostitsyn and a 2nd round pick. Likelyhood: No deal for me here.

Montreal Offer: O'Byrne or Kostitsyn and a 2nd rounder. Likelyhood: Something to ponder, with moving Pronger after the playoffs an option.

One of the better defensive centerman in the game, Pahlsson may just command fairly decent money in the offseason, and Anaheim might seek to get a return on him now. On the Canadiens, his acquisition would give the Canadiens fourth line better definition and flexibility.

A versatile and solid blueliner that Atlanta will have trouble retaining. Could be heavily sought and would represent a sound solution for Montreal for two or more seasons should he be retainable at the same price.

A slickplaymaking center, Connelly's days in Buffalo seem to be at an end. Due to severe injuries and setbacks with concussions, he has been a bust for the Sabres and it is unlikely he will resign. For Montreal, adding a third line center of Connelly's skill as replacement for the injured Robert Lang could be a difference maker down the stretch.

Buffalo offer: Kyle Chipchura and a 2nd round pick. Likelyhood: No deal

It is unclear whether the Avalanche will dangle Smyth at the deadline, but there will clearly be calls for him. Still in his prime, he would add to any team acquiring him. The Canadiens, as other, wouldn't be hurt by his addition of leadership and hard nosed play.

Montreal offer: Same, might dither on Kostitsyn. Likelyhood: A deal if Montreal parts with all four assets. 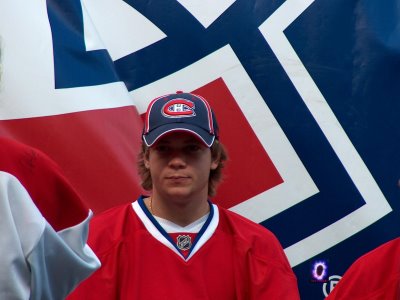 Leopold has seemingly worn out his time in Colorado. It is doubtful Montreal would add him after acquiring Schneider. An emergency only proposition with a late round pick going the other way.

Long sought by the Oilers, Cole has disappointed in his short time there. Seeing as he has always gotten up for games against the Canadiens, there could be some interest.

Montreal offer: S. Kostitsyn Likelyhood: The Oilers would jump at a chance to put him on a line with Sam Gagner.

Will be available and discussed, but many teams will steer clear. His contract removes the Canadiens as a destination.

On a club with little firepower, Nolan has shown he still has a decent touch. He could interest some teams, Montreal included, as he brings much of what Ryan Smyth does only at a more laboured pace. If the Canadiens see a third line fit, there could be talks.

Montreal offer: Steve Begin and a 2nd round pick. Likelyhood: The Wild would consider it.

Arnott is a strong two way centerman the Canadiens would love to get their mits on. It's unclear whether Nashville would part with him unless a good package was sent their way. There's no need to wonder whether he would help Montreal.

Montreal offer: Chipchura, Begin, Dandeneault and O'Byrne. Likelyhood: Only a starter for Nashville. 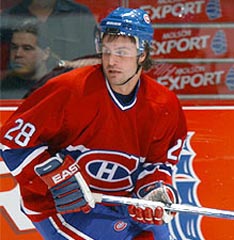 Guerin, a decent goalscorer and rugged player, shouldn't be of interest to montreal anymore than Nolan would be. Personally, I'd hand up the phone.

Ottawa will ask the moon for Kuba, and Montreal would have little interest unless he were to be given away. No offers here.

A very solid young player who has had a disappointing season. It is likely that Ottawa would only consider parting with Vermette if it were to add a roster player of similar value. It's doubtful he would be traded within the same division, but as a french speaking center with speed, the Canadiens will have called.

Montreal offer: S. Kostitsyn Likelyhood: Gainey would jump at it

A player sure to be auctioned off to the highest bidder, Jokinen has never appeared in a playoff game after 11 seasons and 778 regular season games. While that stat alone will scare smart teams away, there will be heightened interest. It's debatable whether he's a fit with Montreal, a team with more depth than Jokinen has known. Seeing as few former team mates have ever spoken highly of him, I would personally not go there.

Montreal offer: S. Kostitsyn Likelyhood: Perhaps a deal, but the salary is a snag

Many are wondering why the Penguins would dangle Whitney, who is signed five seasons beyond this year. It has been said that a sniper to ride shotgun to Crosby is the goal. Should be a prosition that causes many teams to become excited. Could be seen as an interesting aquisition for Montreal only if it no longer seeks to resign Mike Komisarek. 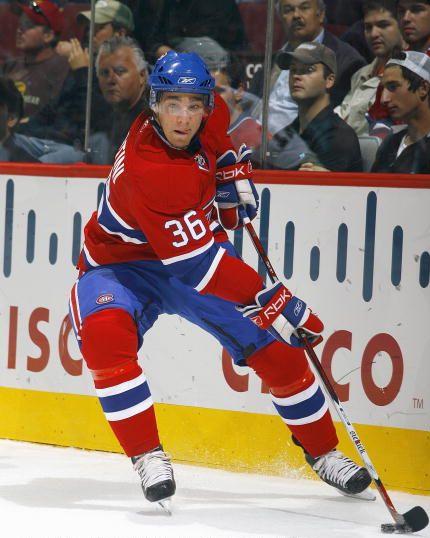 Letang was recently sat out by the Penguins, leading to much speculation a deal somewhere was imminent. The thinking is similar to the Whitney idea, to acquire a shooter for Sidney. As a Montreal native, the Canadiens should be all ears, although adding him does not make the Habs better in the present term.

Tkachuk is a perennial trade deadline commodity it seems. With his salary of next season, I cannot see a fit with Montreal.

McKee is just the kind of defenseman the Canadiens should add in a second pairing role. With one season remaining at a fair price, the curiosity would make some sense.

Montreal offer: Chipchura, O'Byrne, and Dandeneault Likelyhood: The Blues might fall for it.

Grouped together, as it is doubtful these teams would deal. There's something in each player that might entice the Canadiens to become curious, as well as notes to steer clear. Concerns about Antropov's work ethic and consistency, Kaberle's willingness to get physical, and Moore's offensive skills are all reasons to proceed with caution. On the upside for the Canadiens, Antropov is an above average sized forward who can be effective when well surrounded, Kaberle has a strong shot from the point and solid outlet passes, and Moore is somewhat like Cole, in that games for him in Montreal bring him to life.

Moore would be the asset Brian Burke most likely retains, and offers involving Antropov and Kaberle would likely require Higgins as a starter. For Gainey to include Higgins in a deal, my guess is that a more impactful acquisition would be required to get things started.

Of the above 20 player scenarios, I like Arnott, Letang, Whitney, Vermette, Smyth and Havelid only. The rest look like traps to me. It is often said that more managerial mistakes are made on trade deadline day than any other time of the season. I wonder what Michel Therrien would say to that!

With such thinking in mind, Gainey should only be dealing in assured values on March 4. Should he not be able to seal a deal, comfort yourself in knowing that no ridiculous ransoms were paid for tenuous solutions.