Share All sharing options for: Hamrlik Admits To Links With Drug Peddler

Translated from an article by Pierre - Marc Godin of La Presse.

Canadiens defenseman Roman Hamrlik has admitted to connections linking him to presumed drug dealer Paquale Mangiola in an interview with TV Nova in the Czech republic.

The interview, the only one authorised by the Canadiens regard stories published in La Presse last week, was done in order to calm spirits in Hamrlik's native Czechoslovakia.

The Canadiens defenseman admitted to journalist Zdenek Matejovsky that he had indeed had contact with Mangiola, without ever learning what business he was involved with.

"When you are a new arrival in a city, you do not know where to go after games", explained the 34 year old defenseman. "Sometimes, we'd go out to eat and that was all." 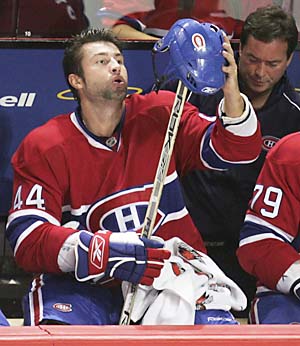 According to information gathered by La Presse, Paquale Mangiola was a person who very much enjoyed being seen in the company of hockey players.

This was precisely the reason why Hamrlik stopped associating with him, the defenseman explained.

"I haven't seen him at all this season because I became aware that he spoke too much about hockey players and that he liked to bring too much attention to himself . We have not seen each other this season."

"It's a good lesson for my next life". said Hamrlik.

In addition to Hamrlik, there have been no criminal charges against the Kostitsyn brothers stemming from the investigation that lead to Mangiola's arrest.