Habs Getting Their Act Together

Share All sharing options for: Habs Getting Their Act Together 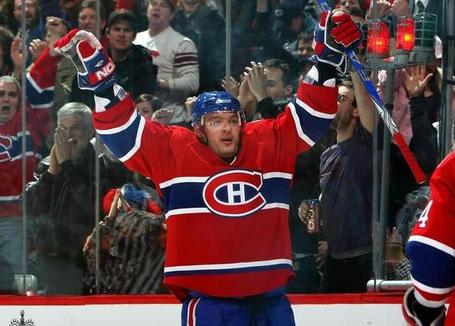 Last night's game, a 3-0 shutout of the Canucks was decribed prior to the contest as a statement game for the Canadiens. It was of primordial importance going forward, especially with the trade deadline approaching, that the club begin playing to it's potential and rise from a disastrous month of February in which their record was a brutal 4-11-1.

Facing Vancouver, the task did not appear to be an easy one for Montreal, as the Canucks were the league's hottest team of late, going 8-1-1 in their last 10 games.

As an example, Vancouver is one that can serve the Canadiens well. Prior to regaining their winning ways, the Canucks went on an 11 game skid between January 2 and 31, winning only 2 of those games. Proof that teams mired in deep ruts can indeed turn matters around.

For Montreal presently, almost every facet of it's current makeup is a rebuilding work in progress. From inconsistent goaltending, absent minded defensive coverage, to forward line instability via crucial injuries, and a powerplay whose pop has gone poof most of the season, nothing about the Canadiens in the month of February spoke for them being a playoff bound group.

As if these woes weren't enough, last week's Kovalev and Kostitsyn issues added to the dump pile, and it looked as though the Canadiens hopes sat precariously on the edge of a nightmare.

The win last night over Vancouver did indeed become a statement for the Canadiens going forward, as it represented the fruition of several new beginnings undertaken of late.

The reorganization of efforts began with the acquisition of defenseman Mathieu Schneider on February 16. In the four games the team has played since the trade, the powerplay has gone on an 8 for 25 clip, a conversion ratio of 32%. In league rankings, the PP jumped from 25th to 17th in that span. 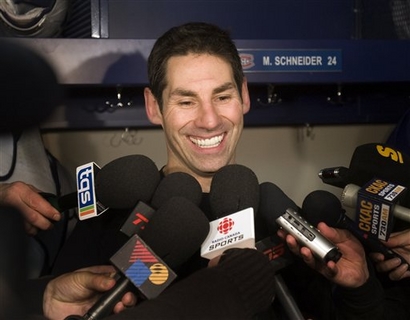 The penalty kill has also gained claws since, allowing only 2 goals in 30 opportunities in those games against players such PP specialists as Ovechkin, Crosby, Malkin, Heatley, Spezza and the Sedin twins last night. The PK efficiency rate over those games has been 93.4%. Clearly, Schneider addition has had a compound effect on the Canadiens blueline.

The forced sitting of Kovalev by Gainey also sent several messages, and not only to the player involved. The team as a whole understood the seriousness of matters, and has played with the required desperation since the move. The fact that in Kovalev's first game missed, the Habs came within three minutes of defeating Washington, spoke that no one is irreplaceable on the club. With the trade deadline approaching, don't doubt that such things aren't on players minds.

The pit of the sewer was reached late last week when news broke of a major story involving a trio of Habs involved in a scandal with alleged drug dealers. As it was later learned the players concerned were simpy on the periphery of the dark tale, resulting ctastrophy was avoided. When GM Gainey publically handled the uproar with distinct calm and perspective, it helped refocus the team to it's goal of winning games.

The way the club has approached recent games, it is playing as though it is fed up with rumours and innuendo, and is looking to reaffirm it's identity, not to mention its integrity. It is quite possible as well that the trade deadline is also scaring the shit out them. 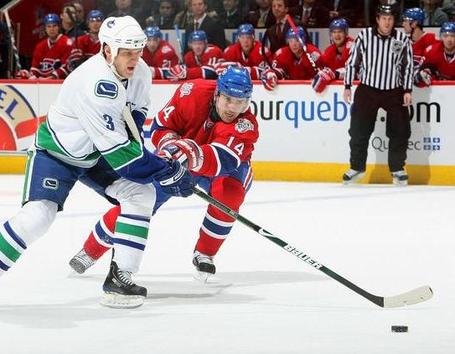 As has been evidenced recently, leadership from all players and the combined toughness of the team has come forth. The return of the "all for one" mentality has been a crucial step in the group regaining it's form.

With all things added together, the kick in the head that has been the month of February so far has spurred the team with a purpose renewed. There is still much work to be done in many areas, but the club has pointed itself in the right direction.

Seeing as the toughest portion of the schedule is underway, the Canadiens are getting their act together not a moment too late.