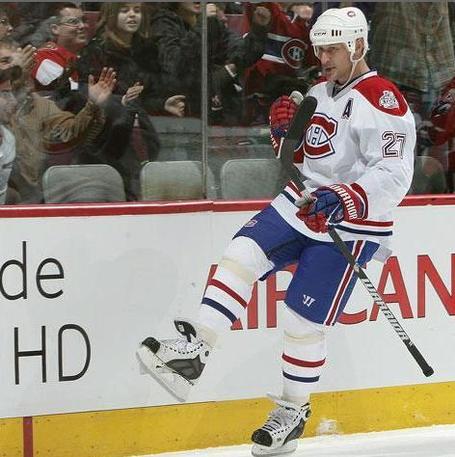 The above quotation is from a song off the new Bruce Springsteen disc called "What Love Can Do", a sort of mediation on romance and trust in the post George Bush era, that today strikes me a whole lot more like a snippet of conversation between Bob Gainey and Alex Kovalev from this past week.

Yesterday's 5-3 Canadiens win over Ottawa was yet another chapter in their ongoing relationship, after it appeared as though the love in Kovalev had shared with the Canadiens and their fans had finally hit the bricks.

Gainey obviously understands Kovalev better than any other person can claim to. Talks with him seem to always elicit the right note, reaction and response. Kovalev has gone through coaches and GM's in his career like a school of pirana on prey after a hunger strike, but Gainey somehow manages to tolerate all his dalliances.

How a seemingly no nonsense man such as Gainey can crack the Kovalev riddle time and again is absolutely baffling. It begs the question as to why Gainey lets Kovalev paint himself into a corner first, before coming to his aid.

On Saturday against the Senators, it wasn't so much that Kovalev dazzled in registering a goal and two assists, it was the complete game he offered the team, sparkling in every single facet of it. Truly, for all his offensive prowess, he was extremely zoned in and poised on the penalty kill, better than has been all season.

Kovalev being a threat in all game situations for a full sixty minutes is something we could all get used to. And that's part of the Kovalev connundrum, one day we're ready to write this guy off competely, the next we're biting our tongues searching for superlatives.

Enigma is the word that comes back time and again when describing him. It is likely one Kovalev would use in qualifying himself. Kovalev, we have learned and are learning, looks most confused and lost on the ice, when he is caring the most and is stumped for solutions. It is in his own nature not to turn to anyone for help when trouble comes. His clouded isolation becomes our grief and frustration, his tortured soul morphing into our desperate anger. 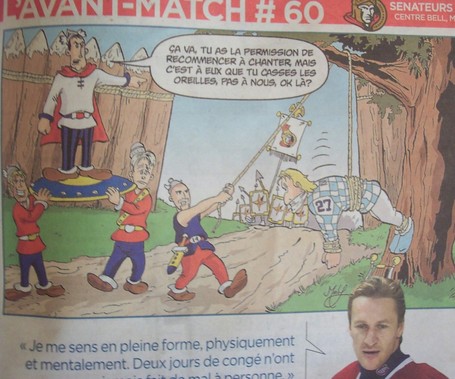 What Gainey is able to do - and very well at that - is slash through all the surface perceptions and bull and get directly into the soul of the man. Gainey cuts straight to the chase, and appeals to Kovalev's heart. Much too direct for mind games, the GM intuitively understands what's eating at Kovalev's craw. He can read disappointment in Kovalev's eyes, pride in his words, and a lonesomeness entangled in his heart. With that, Gainey is able to skip straight to the core of the matter.

How Gainey is able to achieve this, is anybody's calculated guess.

Without scraping up detail, we can all appreciate that the Canadiens manager has scoured his own darkest depths a time ot two. His resilience has surely been built upon the strength of family togetherness. Gainey has never been known to say a whole lot. Others would suggest that he is able to speak minimally and yet say a great deal. The intrinsic value of all this is in listening, watching, and feeling.

I can almost picture Gainey letting Kovalev spill his guts, without saying much. The less Gainey says, the more Kovalev opens, and the more there is to be observed. In that manner, Kovalev is allowing Gainey to see everything from fear and weakness to pride and need.

Now it doesn't take a qualified shrink to get that our enigmatic Kovy loves the spotlight and needs to feel appreciated, but for him it might just take a like minded person who's willing to listen, care, and reach out to make him feel that certain love and faith.

Only Gainey and the player know for sure what was discussed between the two of them this week while Kovalev was distanced from the team for three days. With the story taking a subplot to a greater controversy, it looked as though Kovalev was through in Montreal. Threadlines of stories trickled out - he's pissed off, he's been traded to Pittsburgh, he'll play Saturday, he's clarified his earlier anger, and he's meeting with Gainey.

Neither man lost sight of what it was they needed to accomplish with this forced sit down. Even burried in mounting press reports that doom itself was landing on Montreal, the two did what they had to. It's quite admirable. 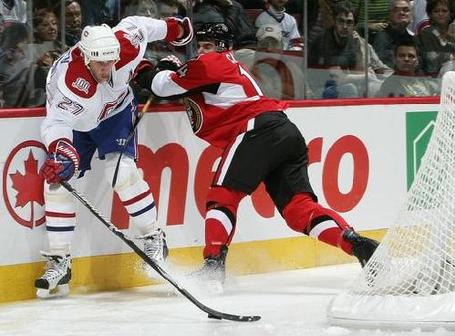 Gainey, by understanding Kovalev better than a lot of us ever will, reached him through the player's love for the game, the team, and city.

When Kovalev speaks with Gainey, heart to heart, it seems to peel away all the uneccessary emotion the player carries. With burdens lessened, focus clarified, and Kovalev feeling more rightfully appreaciated, Gainey has freed him to once again be simply one important asset on the club rather than its deliverer of destiny. The lightened load suits him much better, whereas placing the captain's "C" on his jersey clearly made him less than the sum of his parts.

The Senators game Saturday has been called a "love in" of sorts between Kovalev and fans - Gainey included. Sometimes the love of hockey frustrates Kovalev, sometimes it feeds him. When Gainey identified that Kovalev's work must precede his talent, the direction it gave Kovalev must have been a welcome respite after feeling overburdened by all the responsabilities he placed on himself in trying to make the team win.

"The team doesn't need Alex the way he's playing right now", is how Gainey framed it. He was right. The team needs him the way he played yesterday. Sometimes, a loosening of the chains allows him to be the player he is. Perhaps now Kovalev understands that he owns the keys to his own shackles.

Gainey didn't pull Kovalev aside to run him throught a grinder as many, myself included, first thought. He brought him to a place where, with some reflexion, deep breaths and deeper conversation, an understanding emerged that there was still a lot that he could offer the team when at his best and that this break was a way to help enable it to happen.

The best part, was that by placing Kovalev is a reflective mode, it allowed Gainey to reach him with the message that he still had faith in him. That made all the difference. You could just see it in the way Kovalev was feeling the love after Saturday's game.