Share All sharing options for: Kostitsyn's Mangiola Mistaken For Valet By Merchant 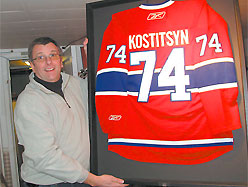 Presumed cocaine trafficker Pasquale Mangiola took such good care of the Kostitsyn brothers, that the merchant who sold them their television and home theatre system believed that the individual was a personal valet of sorts to the two Russians.

Such thoughts seemed totally logical in the eyes of David Smith (pictures above), owner of Environnement Electronique, because the two brothers do not speak a word of french, and that Andrei is very limited in english.

"He truly did do good work on their behalf. Before coming to the store, he phoned to inform us that e was shopping around. He was a real straight shooter with us. Clients like him, I'd have more of", said Smith, from his Sherbrooke St. business in Westmount.

It was via the media on Friday that Smith discovered that Pasquale Mangiola, 38 years, faced six charges running from conspiracy, possession and trafficking of cocaine, and owning a prohibited firearm. Mangiola is among the suspects aprehended in the February 12 "Operation Axe" takedown against organized crime. 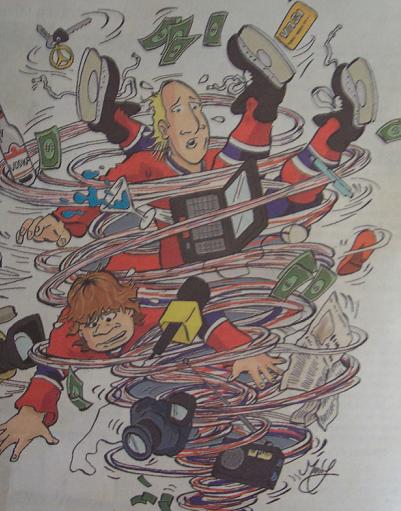 His acquaintance with the Kostitsyn brothers unleashed a virtual media stom over the next 24 hours in Montreal. Environnement Electronique specializes in

"He really did negotiate well on their behalf", said Smith. "He didn't throw their money out the window and never informed me that he was representing anyone of celebrity."

"In reality, we did not know who the true clients were until we reached Andrei's condo to prepare the set up."

Environnement Electronique is a business specializes in top of the line audio, video, and home automation systems.

Andrei had purchased a home theatre system worth over $10,000 in mid October, and a few weeks later Sergei purchased a 50 inch high definition television. In both cases, it was Mangiola who negotiated the purchases for them. It was also Mangiola who supplied the merchant with all the credit card information. "He appeared to be guy who did everything for them. When we installed the home theatre system", said Smith, "He even helped install some wiring". 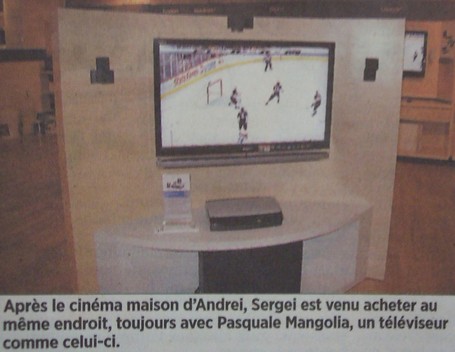 Smith is hockey fan with season tickets and he rarely misses Canadiens games. When Sergei gave him an autographed jersey, Smith quickly ran next door to a neighbouring framery business, wearing it.

It was a gesture of appreciation from a hockey player for services rendered, because with Smith, the brothers surely couldn't become friends, as they could barely understand each other.

"They might have said hello to me once, that's it."

"Just to show you", Smith continues, "When Andrei first came into the store, I didn't express myself well to him, and ended up telling that I thought his brother was a better player. My salesman got really uncomfortable, but Andrei didn't budge. He hadn't understood a word."

According to Smith, the Kostitsyn brothers seem left to themselves in a city in which they understand neither of the two languages spoken.

"Those guys are bit lost", he offers.

It's normal, in such a situation, that they've accepted a man such as Pasquale Mangiola into their realm - a man who knows the secrets of the city inside out, and is always ready to help.

According to Smith, that's the problem at the root of the storm blowing over the Canadiens.

"Until Friday, I thought Pasquale Mangiola was their valet, at their disposition, hired by the Canadiens. To me, that just seemed normal."