Mired In Controversy, Canadiens And Kovalev Get Back To Hockey

Share All sharing options for: Mired In Controversy, Canadiens And Kovalev Get Back To Hockey 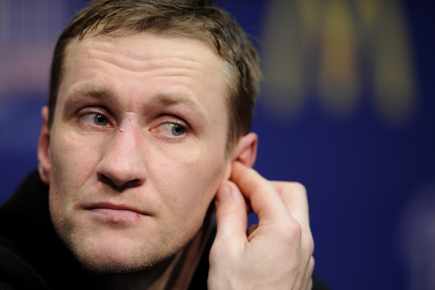 The date of Friday February 20, 2009 wlll certainly live on in infamy as one dark day in Canadiens history.

The story unleashed on the public by the La Presse chain concerning the Kostitsyn brothers association with a known criminal element might not have been the world ending devastation everyone assumed the news bomb would be, but it remains an overshadowing concern for the hockey club and its fans. With reports that there could be followups to the story in coming days, the impending bleakness hangs like an ominous cloud. Clearly, the Canadiens have to start winning some games to focus attention towards the daily hockey talk we'd all rather be partaking in.

This Saturday afternoon, the Canadiens host the Senators in their first home date in almost two weeks. When the team left for the six game road trip, they were doing terribly, and have returned doing even worse. Add in yesterday's bomb drop, and it will be interesting to see the reactions of not only the players themselves, but the Bell crowd as well, should things not go well.

A point of great interest will be the return of Kovalev after an imposed two game exile.

Gainey's move of forcefully sitting Kovalev, who he judged as being totally out of it, elicited mixed reactions across the board. I agreed with it because I felt it was neccessary for several reasons. Kovalev looked disinterested and had been playing brutally for a long stretch. He was giving nothing to the team. I thought perhaps he should have been sat without any announcement of it, but Gainey, who seems to understand Kovalev best, felt different measures were neccessary.

From the sound of it, both Gainey and Kovalev managed these 48 hours well. Gainey kept in constant contact, and Kovalev seems to have cleared his heart and mind for the time being. We've all heard him use the word "rejuvenated" like mantra for four years now, but he does have it in him bounce back. The trouble with Kovalev is, when he's stung, things can go either way.

The one thing Gainey pointed out in his press conference yesterday that I appreciated, was the succinct difference he placed on the words "talent" and "work". In terms of Kovalev's approach, Gainey said that he too often begins by using his talent when gaining the puck, say, at the blueline, for examle, where he first tries to defy all comers with his slick skillset, eventually failing. I've mentioned this many times, saying L' Artiste needs to employ a roller instead of a fine hair brush to paint his moves. Gainey plainly put it that the "work" needs to always come first, in order to use the "talent" at the point when it is most needed. I think that is putting it into terms Kovalev can seize.

We'll all know if he has, by his third shift.

Perhaps the funniest thing about all the Kovalev drama, was the shift I saw in public opinion during the two games he stayed home. After almost winning the first game against the Capitals, there seemed to be a general uncertainty whether he would be back. After losing to Pittsburgh, it switched to "we need out best player to win".

If Kovalev is the Habs best player, they're screwed.

Most talented? There's times when I'd agree with that, but logically a team's best player doesn't just show up for one good shift out of five, every third game. Kovalev might just be the Canadiens most impactful and instinctive gamebreaker, but the title of best player goes to the hardest working player who consistently creates chances and brings results. On most nights, that's hardly Kovalev.

Gainey, for his part, has had a history of being able to reach through to Kovalev, and bring about his deepest conviction. Having to relight the fire is tiresome for all involved, and ought to be unneccessary.

The Canadiens have four games to decide whether they can live with him or without him. He'd better understand that much.