Share All sharing options for: Kostitsyn Drama, A Tale Of Overzealous Media 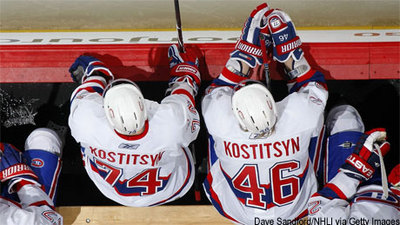 The Kostitsyn brothers's drama reminds me of a hybrid of Jose Theodore and Pavel Bure incidents from years past, with a Montreal hockey media twist.

Bure and some other Russian hockey players of that time, inconspicuoulsy befriended some Russians mafia types, and had to be placed along with their families under heavy protection for a time, due to an assortment of threats and suspiscions. The whole story was never revealed, but the NHL had to investigate every angle of the allegations in fear that other Russian players were involved. It was a money laundering, drug world infused tale, that thanfully went away soon enough.

As for Theodore, the story was quite localized. His stepfather had ties to the Montreal underworld, through gambling and casino associations. Theodore's half brothers were involved also, and large illegal cash transactions were taking place not long after the goalie signed a multi year contract that numbered close to $20 million. Sometime around then, Theo just happened to be snapped in a photo, harmlessly admiring the motorcycle belonging to a member of the Hell's Angels, or some assortment thereof.

Both players were guilty of nothing more than bad association.

In Theodore's case, family ties were the cause of his grief.

For Bure, it might have been the fact that he was a newly wealthy foreigner on North American soil that made him vulnerable. The story came and went without followup.

I find it awful hard not to fit the Kostitsyn brothers story somewhere in the middle of these two.

You have family. You have money, of course. You have the underworld. And now you have misconception.

And again, it looks as though the players dragged into it, could suffer nothing more than guilt by association.

The blender of all these ingredients, is your typical imflammatory french Montreal media, and the clown of a former coach that is Jean Perron.

This week, Perron and La Presse's Rejean Tremblay, took advantage of this brewing story that ran alongside a dreadful Habs losing run in order to make themselves look all knowing in regards to what's wrong with the Canadiens.

If you think that in all this, the Kostitsyn's were easily duped, bite your tongue.

The crew of former coach panelists on RDS's L' Antichambre were scooped up in the pre story - furor. The bunch at 110%, known for squawking over each other like pregnant chickens also got taken in. Yours truly is up until sunrise, disecting and trying to bring a perspective to it all.

Tremblay, likely one of Perron's so called credible sources, is the guiltiest of buffons involved. It is likely he who stirred the whole rats nest, thinking he was onto something when police and lawyers started calling him. I gather it goes with Tremblay's notion of self importance, that he took the crumbs of this story and ran with it.

The story emmanating from all this stink, tells that due to the brothers alleged contact with this Mangiola fellow, that their phone wires were tapped for information.

The police investigators, with no charges to lay on the Kostitsyn's based on the tapped lines, start turning over each and every stone. It leads them to Tremblay somehow, who, if one reads between the lines, has nothing for them.

It never crosses Tremblay's ego, that if investigators are scrapping his barrel bottom, then there isn't much to it.

Nonetheless, Tremblay emerges with what he thinks is a the scoop of a lifetime. His impulsiveness agitates all his media cronies into a frenzy, and it taints the Canadiens organization at the worst possible time in the process.

Not that he gives a crap!

If he is an acredited media journalist still, the Bell Centre ought to revoke his press pass.

Tremblay is also a well known Quebec separatist, whose favorite targets of admonishment within the Canadiens establishment are GM Gainey and captain Koivu. He has also been the main story writer behind the "Lance Et Compte" television series, a hockey melodrama that never veiled its capitalizating on the Habs and Nordiques heated rivalry of the day. Tremblay, named the Nordiques lookalike team in the series, "Le National", which was quite representative for what they stood for in his mind. He has a long history of championing french causes (players, coaches, and management) within the Canadiens scheme, for reasons having to do with his own mandate, and rarely the good of the team. You could call the guy all kinds of blaphemous terms - it wouldn't matter. He was exposed for what he is long ago, and is well supported and surrounded by like minds.

All this disruption in the Canadiens centennial season ought to give him a big hardon. Hopefully, for the Kostitsyn brothers, in the end, the whole story will contain nothing more than warnings for their gullible innocence.