Share All sharing options for: Lecavalier to Habs Was Lightning's Call: Gainey 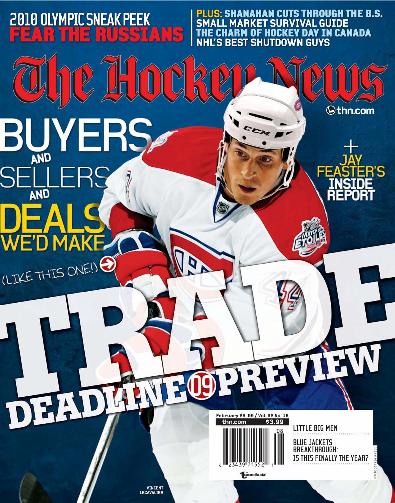 The locked out journalists of Le Journal de Montreal are now posting at a site called Rue Frontenac. Marc de Foy had this piece on yesterday's little blip Bob Gainey seemed to purposely to let slip concerning all the fuss over Vincent Lecavalier coming to Montreal in early January. Here is a translation:

The cat is finally out of the bag. For the first time, as Bob Gainey confirmed on Tuesday, there truly were discussions held with the Tampa Bay Lightning involving Vincent Lecavalier.

"Mathieu Schneider has been a name among our priorities since November, when Vincent Lecavalier came into play", said Gainey. "We put the Schneider dosier aside for the time being before coming back to it in mid January."

The rumour at he time, involved Chris Higgins, Tomas Plekanec, and Josh Gorges going to the Lightning. If it had played out, Lecavalier would be wearing the colours of the Canadiens for a month now.

"The names that you heard, it was them who brought them up, not us", said Gainey, in reference to the Lightning management.

It is logical to think that the Lightning would have wanted at least one core player from the Canadiens, in addition to some future prospects. If the Lightning management do their homework as they should, they will not give Lecavalier away at a discount price.

That happened once in 1995 in Montreal with Patrick Roy, but only happens once every 100 years.

So in hinsight, what really happened in this deal?

We all know that only weeks after, Tampa GM Brian Lawton tossed the whole blame on Montreal media for the explosion of the story, when in fact it was Darren Dregar and Bob McKenzie of TSN who were all over it first. Lawton also emphatically stated that no Montreal media spoke with him on this, when RDS commentator Renaud Lavoie took him to task stating that Lawton just didn't answer his calls.

The most absolute confirmation of the existance of discussions between the parties came when Lecavalier himself admitted that Lawton or team owners gave him personal assurance that he's have some sort of say in where he would be dealt, if in fact they came to that end.

A month or so ago, CKAC had both TSN's McKenzie and Pat Burns on the same call, and McKenzie recealed that Tampa had it's full scouting staff out at the WJC in Ottawa, in order to decide which of P.K. Subban or Ryan McDonagh they liked best. McKenzie said that was when Subban was added in to rumours swirling of an imminent deal.

McKenzie also said that the potential backlash among supporters of the Lightning is likely what killed the deal. The corporate dollars involved in propping up the teams finances, it's advertising income, and the purchase of luxury boxes hung in the balance. The franchise is not a stable one, but faced with the prospect of losing / trading Lecavalier, the future looked even more tenuous.

That was likely when Lawton called his damage control press conference to attempt to clear the whole mess up. talk about a dumb ass rookie GM. He could have just gone to all the corporate entities and asked, "If Lecavalier is traded, will we still have your support?"

The whole mess would have been avoided with a trio of phone calls lasting all of 15 minutes!

Before all this was purposely thrown into the media by the Lightning in order to evaluate Lecavalier's worth, the idea of him ever playing in Montreal was a moot point. Now, because of the Tampa management's reckless methods, this b.s. could hang in the air until Lecavalier's no trade clause kicks in on July 1, 2009.

Now, we just have that snazzy Hockey News cover photoshop to remind everyone what almost could have been.

I hope it blows up in Brian Lawton's face!