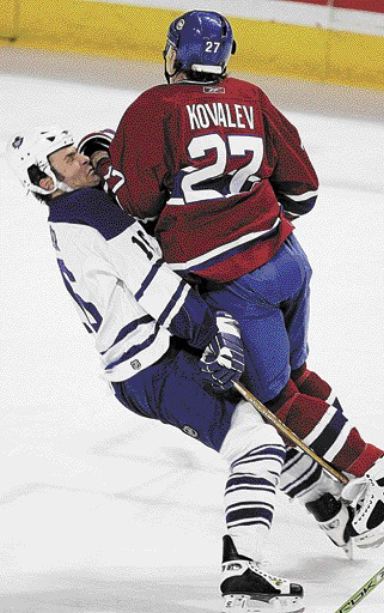 Speaking to media at the Canadiens practice facility in Brossard today, Canadiens GM Bob Gainey caught everyone offguard by announcing that forward Alex Kovalev has been sent home while the team decides what to do with his services.

Gainey explained to Kovalev, and the media present, that in his current state, and with what he is offerering, Kovalev is of no use to the Canadiens. Gainey mentioned that Kovalev was exhausted emotionally and his play was not contributing to the club's effort.

Asked if Kovalev was done in Montreal, Gainey responded that time would tell and that the situation will evaluated in 48 hours time. Gainey said that he explained to Kovalev that his play no longer suited where the team was headed. Apparently there were differences between Kovalev and Carbonneau in how he wanted him to play, and that Kovalev did not seem willing to comply.

Initially, said Gainey, Kovalev resisted the idea, but accepted when told that he needed time for reflexion. Kovalev allowed to Gainey that he is finding it extremely difficult lately and admitted that his play was poor. Gainey stated that Kovalev did not ask to be traded, and that he wishes to continue playing in Montreal.

Gainey added that as it is stood, Kovalev was not a player that he would be interested in signing next season. He restated that at present, Kovalev is not a player than can help the team. The GM said that between now and Saturday's game against Ottawa, that any scenario was possible.

Undoubtably Gainey will be fielding calls from teams curious about Kovalev.

I have just heard all this from CKAK as the story broke, the second such bomb dropped today. Media present from the Brossard arena mentioned that Gainey spoke in english after the french boys had their clips, and that he took a few shots at the Tampa Bay Lightning and Brian Lawton specifically.

When asked about acquiring Mathieu Schneider from Atlanta, Gainey revealed that he had been discussing Schneider since November, but that talks with other teams interrupted his pursuit. He then dropped, off the record seemingly, but heard by all, that the entire Lecavalier rumours were brought forth by Lawton.

Gainey, it was told, specifically said that he never called Tampa about Lecavalier, and that the talks were initiated by Tampa, and that the rumoured players involved (Higgins, Gorges, and Plekanec) were names Tampa were asking in return and not ones he put forth. In stating this, Gainey is surely alluding that Tampa put the rumour into the ears of the public.

As CKAC then put it, if this were in fact a proposed deal, then why didn't Gainey pull the trigger?

Gainey for his part, did not elaborate.

Certainly, we have not heard the last of all this!