Share All sharing options for: Schneider acquisition will lighten load of overburdened Markov and injured Komisarek 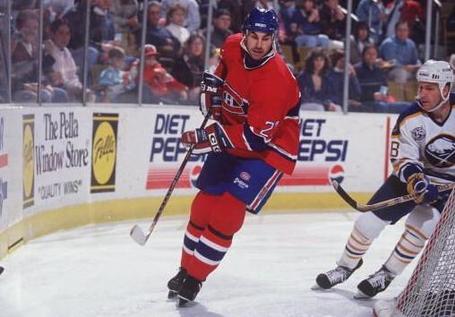 (Mid-post update: Apparently Bob Gainey shared Carbonneau's conclusions. While I was writing this piece, I learned that the Canadiens had acquired Mathieu Schneider from Atlanta, causing a great shift in where this piece was heading. I was about to give Markov a due roasting! The article was reconstituted some to include this latest aquisition.)

With the Canadiens in such a sad state presently, I watched the Canucks matchup with a distinctly different eye last night.

I sought to find exactly what was and wasn't working properly, uniquely on it's own terms in this one specific game. I tried to examine what looked recognizable from earlier parts of the season versus what was all out of whack on the ice on this night.

There was an abundance to choose from, but I wanted to pinpoint the one thing, that if fixed correctly, might help make a difference in an area of importance to the team.

I believe I found something Guy Carbonneau found as well.

Watching the game on RDS, two things that occured in complicity set me in a particular direction.

The first was commentator Benoit Brunet pointing out how much difficulty Mike Komisarek was having on the ice. It had been quite evident to that point that Komisarek had been struggling for some time, but when a replayed clip highlighted that his shoulder was hampering him a great deal, much more became clear.

In consequence, what I noted next, what the Canadiens seemed to play more fluidly when Komisarek was removed from Andrei Markov and paired with either Roman Hamrlik or Josh Gorges. The move limited the mistakes of two players who often tried to do too much on the ice. 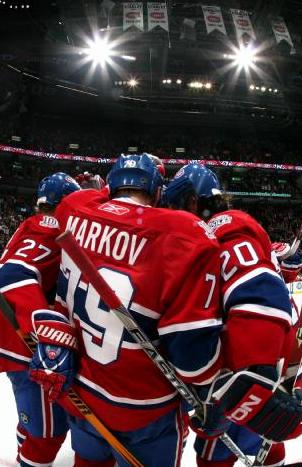 Komisarek for his part, was working with less, while trying to do more. There were certain things he seemed incapable of doing as usual, and in pushing himself, he was committing an uncharacteristic number of turnovers at the worst possible times.

Markov seemed to want to make up for the Canadiens crippled offense all by himself. Regardless of Komisarek's predicament, he has of late been taking outrageous chances in the offensive zone - also uncharacteristic decisions on his part.

As the Markov and Komisarek pair play the greatest number of minutes on the Habs, these trends could not go on. Markov was a criminal minus 10 in the last eight games, and Komisarek minus 5.

Although the Canadiens lost once again in Vancouver, the icetime of Markov and Komisarek dropped greatly, as it was spread across all six defensemen more evenly than in had been all season. The noticable effect was a limiting of errors, but also and absense of scoring chances and offensive risks.

During the third period, when the pairing seemed the most settled and Komisarek and Markov were not overextended, the Canadiens game was brought back down to basics, and the forwards seemed to be more in synch with the blueliners that they had been in a good while. 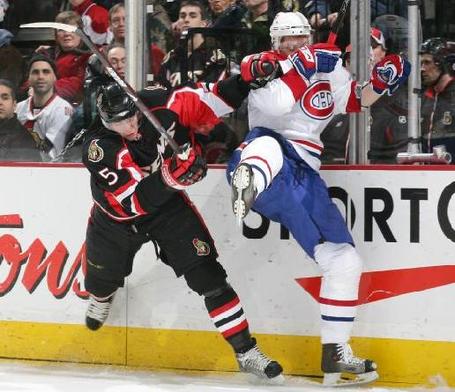 That was the one single positive note that stuck with me after the game, as it was obvious that Carbonneau had had enough and made the adjustment.

Often, when questions arise about the Canadiens leadership, the fingers generally point to the coach, the captain, and Kovalev. It is not often underlined that their best paid player, and leader in minutes shares in the blame greatly.

Last week, after one particluarly brutal error in judgement found Markov trapped up ice, the cameras spotted a heated exchange between him and assistant coach Doug Jarvis. Recalling the mistake that lead to the resulting odd man break and the incident at the bench, one can only wonder what Markov's argument was. He clearly could not have had a good one. If Markov is that defiant, I gather it helps expose part of the problem.

Back on December 13, I wrote a piece entitled "Komisarek's Absense Robs The Canadiens Of It's Sleekest Wheel". In it, I mentioned that the Canadiens as a whole, and Markov in great part as well, sacrificed offence in order to tighten up during Komisarek's loss. While it hampered both the Canadiens and Markov's production, the result was that the team played better defensively as a whole - something they surely need to do now. The point of the piece then was to examine what Markov had relinquished in terms of contribution to the team, and how it would replace itself upon Komisarek's return.

"With an added focus to employing stricter coverage, Komisarek's absence has strangely affected the team's offence. In the 14 games Komisarek played in, the team netted 46 goals. In 15 games without him, they have counted only 35. Consequently, while Komisarek was dressed, they allowed 38 goals in 14 games for a GAA of 2.71. In the 15 since he was injured, that total has been cut dramatically to only 30 goals in 15 games for an average goals against of 2.00."

In total, Montreal played 16 games without Komisarek, and had a record of 7-5-4, which was hardly convincing. The team lost the final three games of that stretch, a dismal run wherein I wrote the referenced piece.

Upon Komisarek's return on December 18 against the Flyers, the Canadiens hit their best stride of the season, going 11-2-1 in the following 14 games. His return obviously helped correct the situation. In doing so, the Canadeins then outscored opponents 54 - 40, with an average of 3.13 goals scored per game, and an average of 2.85 goals against per outing.

With Komisarek apparently playing with a shoulder injury presently, Markov either needs to reel his game in once more, or be paired on a consistent basis with Josh Gorges. Last night, Markov played a season low 19:23, while Komisarek played only 17:47. 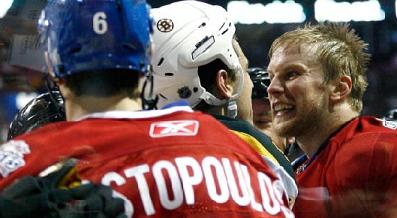 As I stated at the top, there weren't many positives against the Canucks, but there seemed to be improved communication and understanding between the forwards and defenseman come the third period.

At a time where Vancouver usually shuts down opponents with the lead, the Canadiens came on stronger, outshooting them 12-5. While no miraculous comeback ensued, there were visible indications of a smoother transition game that involved everyone on the ice. Gone were Markov's lone rushes and hail Mary passes that lead to icing calls, and the groups played like units of five in ways that have rarely been seen of late. When coaches speak of teams going back to basics, this method is part of what that involves.

In reducing Markov's responsabilities and icetime, the next logical step incurs getting better quality minutes from the fourth, fifth and sixth defenders in the lineup. As Gorges, Bouillon and Brisebois aren't candidates to log big minutes of Markov's PP time - thereby saving his usage at even strength and PK - it only made sense to bring in a player who could help in that regard.

Mathieu Schneider, acquired today by the Canadiens, could help lighten the load of expectations on Markov. At 39, he's no longer the player he once was, but as a depth defender, can surely make a noticable contribution. Playing close to 20 minutes per game with the Thrashers, Schneider was minus 10 on what was clearly a weak team.

In yesterday's 8-4 Thrashers win over Anaheim, Schneider played 20:02 (including 3:36 on the PP), had an assist, and was plus 2. He had five shots on goal (second best behind Kovalchuk), had three more blocked, committed no giveaways, and had two hits.

Schneider had similar numbers in his last meeting with the Canadiens on January 20. In a 4-2 Thrashers win, he played an even 21:00, with 3:04 of PP time, had 2 hits and 2 takeaways with no giveaways

On a team where his load is lessened and where he is better surrounded, Schneider should help settle some serious issues simply by playing within his means. 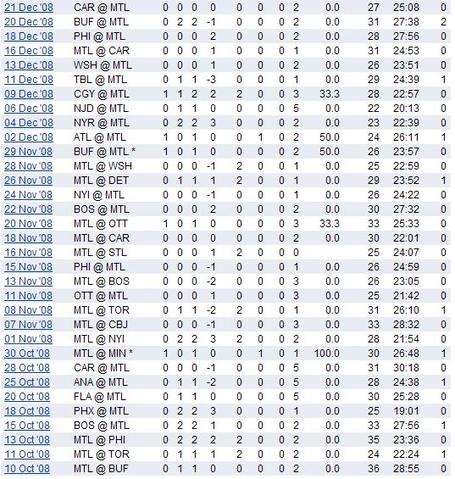 Game by game stats for Komisarek, Markov, and new acquisition Schneider can be seen below, as well as the 14 games slice prior to Komisarek's November injury, the next 14 games, and the team record since. 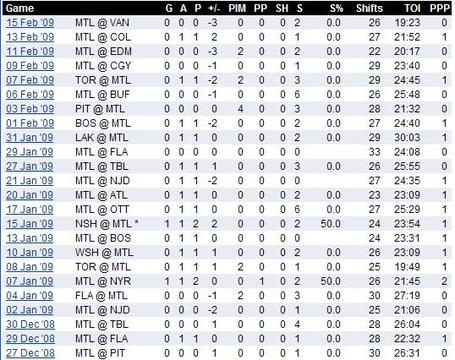 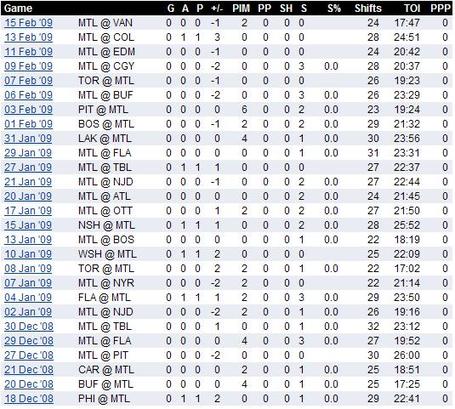 These are the 16 games played in Koomisarek's absense from November 15 to December 18. 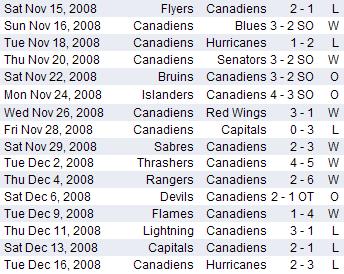 Here are the 14 games upon Komisarek's return from December 18 to January 17. 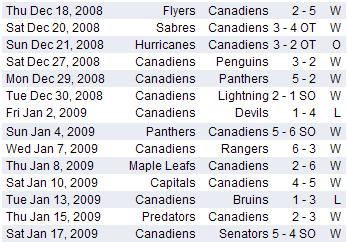 Komisarek's shoulder was injured in the January 17 game against Ottawa and he hardly been the same since. Here is the Canadiens record since that date. 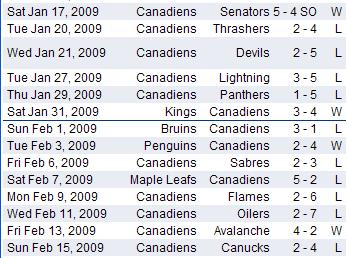 Here are Mathieu Schneider's stats on the season. 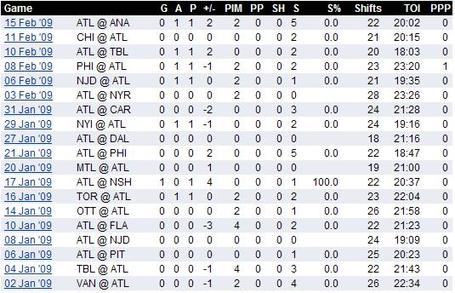 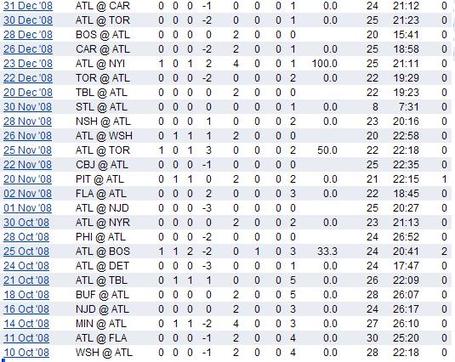