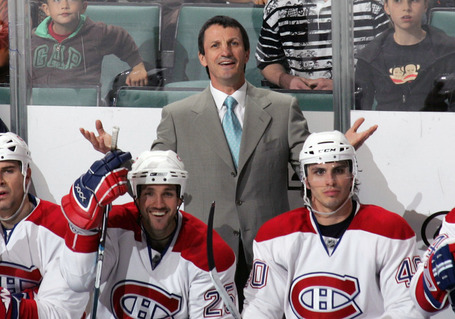 Hearing the news earlier yesterday evening that Penguins coach Michel Therrien had been relieved of his duties in Pittsburgh ran through my mind all during the Canadiens loss to Vancouver on Sunday night.

I liked Therrien as a coach, and appreciated his time in Montreal. He'd done some good work with the Canadiens, especially during the 2002 season, in which he corralled a group of disjunctive spare parts into a unified whole that clinched a playoff spot despite the season long absense of captain Saku Koivu. With an able vet in Doug Gilmour to help lead, the team simplified it's game down to the bare essential basics, made Jose Theodore look great in the process, and knocked off the top seeded Bruins in the first round. Despite the coach's meltdown that turned the following Carolina series, the campaign was deemed a triumphant one.

After his firing in Montreal, Therrien worked his way back to the NHL with Pittsburgh, taking a last place team to within two games of winning the Stanley Cup last season.

Yesterday, Therrien became the wrong man for the job, in essence paying for the mistakes of his GM Ray Shero, and injuries to key players. Missing from the Penguins ranks are Marian Hossa, (a gamble that cost Pittsburgh the likes of Colby Armstrong, Erik Christensen, prospect Angelo Esposito, and a first round pick), Ryan Malone, Gary Roberts, Jarkko Ruutu, Georges Laraque, Darryl Sydor, Mark Recchi, Adam Hall, and goalie Ty Conklin. Add in the season long injuries to top defenseman Sergei Gonchar and Ryan Whitney, and there are close to a dozen missing pieces that subtract grit, character, leadership and secondary scoring from the Penguins ranks.

How all that became Therrien's fault is one good guess! 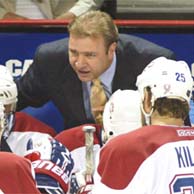 It just goes to point out that coaches are often victims of circumstance. In Therrien's case, one could suggest that he arrived timely enough with Crosby and Malkin to make him look good, and was canned when they weren't enough to make him look better. It was as nonsensical a firing as any I'd seen.

It isn't a stretch to see Guy Carbonneau in a similar predicament, a victim of circumstance in many ways himself.

It is through struggle and challenge that individuals, players, and coaches improve, learn, and prosper. It's impossible for those involved to put their lessons to work when the rug is pulled out from under them in mid process.

Therrien's firing, and the recent removal of Craig Hartsburgh in Ottawa, more than likely underline the shaky foundation that their general managers sit on, in the opinions of team owners.

In Montreal, one hopes that GM Gainey is not sitting on such quicksand that he has to point the finger of blame to save his seat.

Looking at Carbonneau's struggles lately, the parallels with other firings are ominous. The difference, one hopes, is that in Montreal, the work Gainey has done in five seasons to point the team in a stronger direction is more appreciated.

The circumstances handed to Carbonneau have exposed certain weaknesses in his approach. Inexperience and stubborness only partly explain recent pitfalls. It will not be lost on Gainey, the hand Carbonneau has been dealt to play.

In a pressure situation, the scrutiny on Carbonneau should not be on the cards played themsleves, but on how they are played and when.

So far, Carbonneau is coming up empty while dealing in deuces, and Gainey I sense, can see this.

Before Gainey reaches Shero and Murray's extreme, you will see a move to improve Carbonneau's hand.